Dakota County Technical College joined 394 colleges and universities in earning the inaugural ALL IN Most Engaged Campus for College Student Voting recognition, which honors the intentional work the campus community accomplished in 2022 to institutionalize nonpartisan democratic engagement to increase student voter turnout.

DCTC earned the recognition by completing the following four actions: 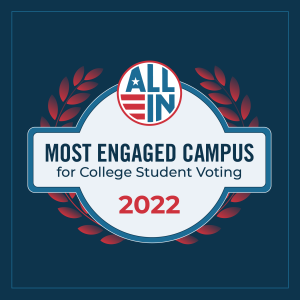 Anna Voight serves as associate director of student life at DCTC. Anna reported that students in the college’s Voter Engagement Group—Jonathan Torrence, Emily Walzer-Kuntz, Jarred VanHorn, and Danielle Jones—deserve all the credit for their work to increase student voter turnout and the ALL IN recognition.

“In the 14 years I have been involved in voter engagement work at DCTC, I have never worked with such a passionate, diligent, and innovative group as our students were this year,” Anna said. “They brainstormed innovate ideas about how to engage their peers in discussions about voting that would inspire them to vote.”

Anna added that she was most impressed with the creative ideas the group developed to encourage students to ask questions that would lead to conversations about voting. The group came up with the idea to use LeadMN grant funds to purchase White House and U.S. Capitol Building LEGO® Sets. Student leaders who had completed the Ask Every Student academy assembled the sets in common areas on campus, welcoming anyone in the campus community to join in constructing the LEGO replicas.

The completed LEGO® Sets were placed on desks staffed by student ambassadors in two key student spaces on campus. The areas were designated “Voter Registration Help Desks” with idea of attracting passersby and striking up conversations about voting that would inspire students to vote during the 2022 midterm elections.

“Our entire student ambassador team worked on building the LEGO® Sets and also staffed the Voter Registration Help Desks,” Anna said. “I am so proud of our student leaders and their great work on voter engagement initiatives this year!”

Message from ALL In Executive Director Jennifer Domagal-Goldman

“College student voter turnout has increased since 2016, and this increase has been driven by students. The ALL IN Campus Democracy Challenge is excited to expand our ALL IN Student Voting Honor Roll to recognize these student voting champions across the country,” said Jennifer Domagal-Goldman, executive director of the ALL IN Campus Democracy Challenge. “These students registered voters, served on their campus voting coalitions, spearheaded voter education efforts, advocated for campus polling locations and organized other voter engagement efforts to ensure their peers were confident and informed voters. We are excited to see what they continue to accomplish ahead of  the 2022 midterms.”

The ALL IN Campus Democracy Challenge currently engages more than 9 million students from more than 950 institutions in all 50 states and the District of Columbia. Campuses can join the ALL IN Challenge at Join ALL IN.

More about the ALL IN Campus Democracy Challenge

ALL IN, in collaboration with more than 960 higher education institutions, seeks to:

Learn more about college student voting at DCTC by contacting:

Club will collect food donations Oct. 10 – 17 for 360 Communities in Rosemount  The Dakota County Technical College Lions Club has the honor…