The Blue Knights basketball team at Dakota County Technical College completed the 2021–2022 season with a 20–10 record and an 8th place finish at the NJCAA Division II Men’s Basketball Championship in March 2022 at the Mary Miller Center in Danville, Illinois.

The #14 seed Blue Knights lost to the #3 seed SUNY Sullivan Generals 71–75 in game #2, but went on to defeat the #11 seed Southern Arkansas University Tech Rockets 74–71 in a consolation game and the #10 seed Niagara County Community College Thunder Wolves 82–73 in the 7th place semifinal before losing to the #13 seed Parkland College Cobras 67–85 in the 7th place final.

“I am extremely proud of what the guys were able to accomplish in Danville,” Head Coach Peter Olafeso said. “It was the first time in our program’s history that we won two games at the National Tournament. We had a couple of players who took advantage of the opportunity and will be moving on to play at the next level.”

DCTC advanced to the nationals by beating the Central Community College Columbus Raiders 71–67 at home March 5, 2022, to win the NJCAA DII Men’s Basketball North District Playoff. The team defeated the United Tribes Technical College Thunderbirds 94–93 in an away game February 27 to win the NJCAA Region XIII Championship. The Blue Knights rolled past the Dakota College at Bottineau Lumberjacks 101–64 the day before and also away to win their Region XIII semi-final game.

Head Coach Peter Olafeso guided the team to a 21–10 record, Region XIII Championship, North District Playoff victory, and an appearance in the NJCAA National Championship Tournament in the 2019–2020 season—his first as the team’s head coach. The tournament was cancelled due to the COVID-19 pandemic.

“I am looking forward to the 2022–2023 season with a strong core of returners along with a good recruiting class coming in,” Coach Olafeso said. “We should be in a position to compete for a Region XIII title.” 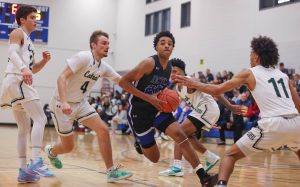 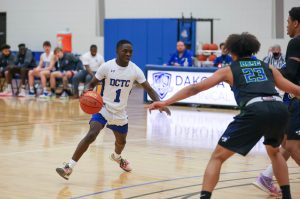 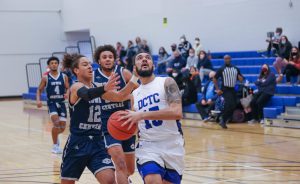