Join the Minnesota State Womxn in Higher Education Employee Resource Group (ERG) as they celebrate Women’s History Month 2022. The ERG is holding a discussion event via Zoom Friday, March 25, 2022, from noon – 1 p.m. The event is open to all Minnesota State students and employees as well as community members.

Six Minnesota State college and university presidents will be participating: 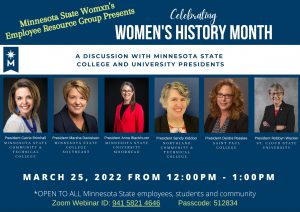 Zoom: https://minnstate.zoom.us/j/94158214646
Passcode: 512834
Open to all Minnesota State students and employees as well as community members

Lisé serves as co-chair of the Womxn in Higher Education ERG.

I’m excited to support the mission of the Womxn in Higher Education ERG as a co-chair with Laura Boche, coordinator of strategic initiatives, Minnesota State system office. Two of my favorite quotes that support our ERG efforts are from Shirley Chisholm: 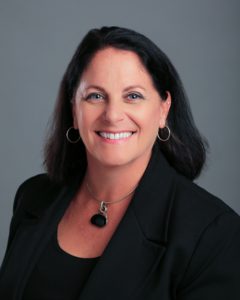 “If they don’t give you a seat at the table, bring in a folding chair.” & “Tremendous amounts of talent are lost to our society because that talent wears a skirt.”

We are excited that our first panel discussion will include some of our womxn presidents within the Minnesota State system. Unfortunately, due to meeting conflicts, not all of our womxn presidents are able to be on the panel or join the meeting discussions. We also recognize the diversity, equity, and inclusion efforts across all Minnesota State colleges and universities and across all Employee Resource Groups, including the Womxn in Higher Education ERG. We look forward to reaching out to our womxn colleagues across Minnesota State as we plan future events, grow our membership and expand our efforts to promote womxn.

Our Womxn in Higher Education ERG will focus on networking and mentoring, professional development, and advocacy for womxn across the 37 Minnesota State colleges and universities. I got involved in this ERG as part of my continued efforts to make sure that womxn have a voice at the table—whether in our personal or professional lives. I have been involved in other womxn mentoring circles and strongly feel that I need to continue to use my voice, not only for my daughters, but for all of us in this sisterhood.

Carrying on the legacy

Other womxn have come before me in breaking barriers including my mom, sisters, aunts, and grandmothers. I continue in their footsteps to make sure that womxn are not silenced or ignored. In fact, the rallying cry of “nevertheless, she persisted” following the Senate ruling trying to silence Senator Elizabeth Warren is one of my mantras.

I must have been a gladiator or warrior in a past life. It is probably a combination of my childhood, my general life experiences, my college education as a journalist, and my law school training, but I have always been willing to fight for and defend womxn’s rights. My daughters, Gabriella, 21, and Gianna, 19, are following in my footsteps as well to break barriers and support the womxn’s movement.

Gabriella participated in the Million Women March in Washington, D.C., and Gianna was a top running back and linebacker on the boys’ youth tackle football team for three years. Both of them have actively supported the Girls on the Run program through the Gamma Phi Beta sorority at the University of Wisconsin-Madison. They are truly my heroines. My daughters, and others like them, are our future and I hope to continue to pave the way for them.

As a Minnesota State colleague, you are welcome to join the Womxn in Higher Education ERG by completing the following surveys:

You can also join via the following site:

International Women’s Day (March 8) is a global day celebrating the social, economic, cultural, and political achievements of women. The day also marks a call to action for accelerating women’s equality.

IWD has occurred for well over a century, with the first IWD gathering in 1911 supported by more than a million people. Today, IWD belongs to all groups collectively everywhere. IWD is not country, group, or organization specific.¹ 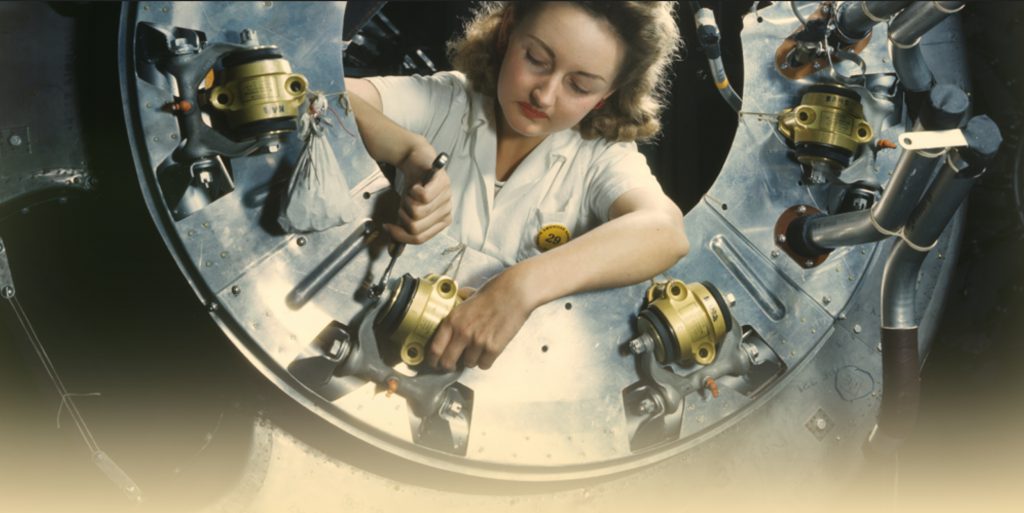 The Library of Congress, National Archives and Records Administration, National Endowment for the Humanities, National Gallery of Art, National Park Service, Smithsonian Institution, and United States Holocaust Memorial Museum join in commemorating and encouraging the study, observance, and celebration of the vital role of women in American history.

Since 1995, presidents have issued a series of annual proclamations designating the month of March as “Women’s History Month.” These proclamations celebrate the contributions women have made to the United States and recognize the specific achievements women have made over the course of American history in a variety of fields.

The Minnesota State Office of Equity & Inclusion is supporting the creation of ERGs across Minnesota State to provide employees with an enhanced sense of community, support opportunities to network with peers, to gain a stronger sense of belonging, and to experience mentorship opportunities. Moving forward, our office will provide the support and guidance necessary to ensure ERGs are able to meet the needs of our vibrant and increasingly diverse workforce. 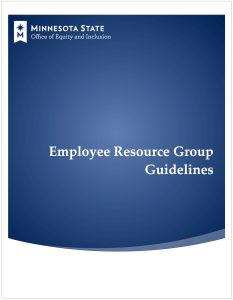 Benefits of Participating in ERGs

ERGs provide a space for employees to gather and work collaboratively toward common goals. These groups often co-sponsor events for professional development for employees of color or other underrepresented groups, including bringing in speakers, conducting trainings, and delivering workshops. The ERGs also can provide less structured opportunities for employee socialization and engagement. It’s critical to allow the ERG to decide its focus while adhering to the organization’s principles, and mission for equity and inclusion.

Some campuses across Minnesota State already have ERGs in place, so you may be wondering how the statewide ERGs are different. The Minnesota State ERGs are not meant to take the place of individual groups which may already exist on any particular campus. Some campuses, however, do not have enough employees to form a group or they may have a limited number of groups available to participate in. Participation in ERGs is completely voluntary and employees can choose to participate in any campus or statewide group, or consider forming their own group consistent with the parameters contained within the ERG Guidelines.

After splitting doubleheaders with Ridgewater and Rochester this past week, the DCTC Blue Knights now stand at 15-11 on the season. On Wednesday, the…