Jordyn Breitbarth, 25, graduated from Dakota County Technical College in May 2016 with her Associate of Science (A.S.) in Individualized Studies. Jordyn focused her studies on Exercise & Sport Science coursework. She also played two seasons (2014–2015 and 2015–2016)  for the Blue Knights softball (OF, SS) and women’s soccer (GK) teams. 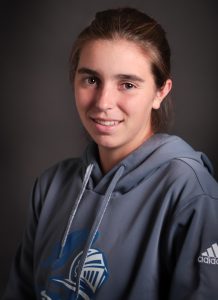 One game from Jordyn’s DCTC soccer career shines as a highlight in her memory, a 1–0 shutout victory over the University of Minnesota club team.

“That was one game that really stood out,” she said. “Winning was an all-around, great team effort.”

Jordyn served as a student ambassador while attending DCTC. She helped with Orientation Day, blood drives, Game Day Tuesdays, and the Mobile Pantry during her time as an ambassador.

“Overall, serving as an ambassador helped me develop my networking and people skills,” she said, “which can be used in all aspects in life. It especially helped me get familiar with the other side of college that didn’t involve sports.”

“I just started my third year,” she said, “which consists of clinical rotations at various locations in the Midwest. Right now, I’m leaning towards being an acute care physical therapist. This would consist of working in a hospital setting and potentially working with patients who just came out of surgery, patients who suffered from strokes, or patients who have infections such as pneumonia and have suffered from general deconditioning.”

“Jordyn is a very gifted athlete who has always striven to be the best. She has always competed hard both on the field and in the classroom. She will achieve at the highest level!”

“Jordyn was an outstanding player and a leader on and off the field. She always gave her best effort and was a leader by example. She was looked up to by the coaches and her teammates.” After graduating from DCTC, Jordyn attended Wayne State College in Wayne, Nebraska, where she played NCAA DII softball for the Wildcats in the NSIC Conference. She played for two seasons (2017 and 2018), excelling on the field and in the classroom. Jordyn credits her time competing as a Blue Knight as the catalyst that helped her thrive in the NCAA.

“Unfortunately, I had the biggest slump of my life during my senior year of high school,” she said, “which kind of brought my confidence down in hitting. Playing at a JUCO like DCTC was a good transition between high school and the higher collegiate level and allowed me to build that confidence again. It was still a big transition going from JUCO to NCAA Division II, but it would have been an even bigger jump from high school straight to DII.” Three words that describe you as an athlete:
COMPETITIVE. DRIVEN. LEADER. 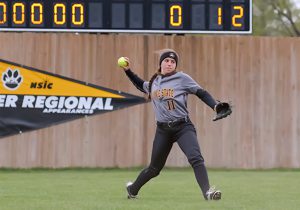 Originally from Hilo, Hawaii, a city of nearly 44,000 residents on the Big Island and located at the base of Mauna Loa, an active shield volcano, Jordyn graduated from Hilo High School, Class of 2014. “I love the diversity of Hawai’i,” she said. “There is diversity in the people—locals like to call it a ‘mixed plate’ of ethnicities. There is diversity in the land and climates; you can drive from the black-sand beaches to the snow on top of Mauna Kea in a matter of hours. And despite all the diversity, there is a strong sense of community in Hawai’i, and I know I’ll always have people in my corner back home. I’m looking forward to the day that I can give back to the community that raised me.”

Jordyn just got married in June 2021. Her husband, Jared Guthrie, is a fleet manager at K&B Transportation, where he dispatches 30+ drivers on a daily basis, handling their trip plans and coordinates logistics along with monitoring load pickups and deliveries.

“We met at Wayne State College and got married in Wayne, Nebraska, as well,” Jordyn said. “COVID cancelled our original wedding plans of having it back home in Hilo. It’s only fitting that our original Caribbean honeymoon plan got cancelled, too.” For their honeymoon, Jordyn and Jared opted to go on a 3,000-mile road trip across six states, visiting numerous national and state parks.

Jordyn’s parents, Brian and Lori, reside in Hawaii. Her dad works as a cable technician for Spectrum, but originally was hired as an air conditioning installer at Pacific Air Control when he first moved to Hawaii in 1986. Her mom is an activities coordinator at Kea’au Elementary School.

Jordyn has two brothers, Josh, 23, and Jyson, 19. “Josh graduated this past May from Simpson College in Indianola, Iowa,” she said, “where he played baseball, and will start his teaching career at Winterset Elementary School in Indianola. Josh also went the JUCO route and played at Iowa Central Community College in Fort Dodge, Iowa, prior to Simpson. Jy currently attends Northeast Community College, where he is a goalkeeper on the men’s soccer team. Right now he’s planning on double majoring in environmental science and criminal justice and eventually transferring to a four-year school to continue his soccer career.”

Growing up in Hawaii…

Jordyn was very active growing up on the Big Island. “I loved to play catch or stickball in the yard with my two brothers, as well as ‘venture’ with my friends and family, whether it be hanging out at the beach/river or hiking to jump off some waterfalls.”

Jordyn competed in a variety of sports in high school, including track and field, cross country, soccer, softball and basketball. Hilo didn’t have a big girls softball presence so she played baseball with her brother, Josh, instead.

“I think I played other sports with my brother, too,” she said, “because it was convenient for my parents, but I didn’t mind playing with the boys.”

Jordyn added that she did body/boogie board growing up, but never surfed. “I didn’t go surfing until my first year at DCTC,” she related. “The softball team took surfing lessons during one of our Florida trips.”

“I still enjoy hanging out with my brothers,” she said, “and even though we are a bit more spread out, we still get together pretty often. I got to watch a lot of Jy and Josh’s games this spring and actually watched Jy’s game against DCTC. I enjoy running now, watching sports (especially going to Sioux City Musketeer and Explorer games), and just hanging out with my new hubby and cuddling with our cats, Winston and Winona. We got them from a shelter so all we know is that they are dark gray tabbies. We hate to admit it, but Jared and I are definitely those cat owners who take their cats on walks.”

Jordyn and Jared reside with Winston and Winona in South Sioux City, Nebraska.

How did your education at DCTC help prepare you for your future academic endeavors?

DCTC helped me with career exploration; I knew I wanted to do something in the medical or athletic field, but wasn’t sure exactly what. I figured out at DCTC that athletic administration/the business side of sports were not for me, and something more along the lines of athletic training/physical therapy/occupational therapy was my niche. It took a couple more years at WSC to really find my passion for PT.

What traits do you need to be a competent physical therapist?

You need to have compassion for your patients and understand their struggles as well as their accomplishments. Sometimes patients struggle with completing simple everyday tasks such as going up/down a curb, which can be very frustrating. At the same time, a patient may have gained enough strength to now go up that curb, but they do not see it as an accomplishment and continue to be frustrated. So you need to hype up your patient and show them how much they progressed and accomplished in their time at therapy.

You also need to realize that you have to be a lifelong learner. The medical field is constantly advancing and with that so is physical therapy. You need to keep up with the times and go out of your way to learn how you can better help your patients.

What has inspired you the most on your journey from completing your A.S. at DCTC to earning your doctorate at Briar Cliff?

I would say my family and husband are my biggest inspiration. They were all with me at different points in my journey, but I believe they all had key roles in getting me where I am today. I could not have done it without their listening ears and words of motivation.

My husband has also been a great help in PT school by being my go-to practice man and letting me practice some manual techniques and those hands-on skills with him. I also like to think that someday I can pay them back if they ever need some physical therapy tips and tricks.

Three words that describe you as a physical therapist:
DRIVEN. COMPASSIONATE. MOTIVATOR.

What are some of the highlights of your softball and soccer careers at DCTC?

Definitely going on road trips with my teammates. We went to Utah and Chicago for soccer and Florida twice for softball while I was at DCTC. I had never been to Chicago or Florida before that. There were so many laughs shared and memories made during those trips.

What advice would you give high school athletes thinking about playing NJCAA sports?

Don’t look down on playing at a junior college—it’s just as much fun as playing at a bigger school. You still get to enjoy game days, practices, traveling, and team bonding. If you absolutely dream of playing at a higher level and don’t get your dream offer right out of high school, take a year or two at a JUCO to develop your skills, make a highlight video, and give yourself a second chance at it. That’s the beauty of playing at a JUCO.

What person has influenced you the most in life and why?

I think the best part about my parents is that while they were teaching me overtime, they still allowed me room to make mistakes and grow individually—it wasn’t their way or the highway. 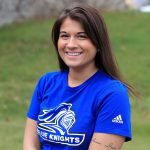 Jess also played volleyball for DCTC during 2016–2017 season. She covered the positions of catcher and second base in softball and was a defensive specialist in volleyball. She graduated in 2017 with her A.A.S. in Dental Assistant, went on to earn her B.A.Sc. in Dental Hygiene and is aiming for dental school to become a dentist operating a mobile dental clinic serving remote villages in Alaska.

Look for Jess Hall’s Blue Knights Alumna Spotlight story in the near future on DCTC News. Learn more about NJCAA DII softball at DCTC by contacting:

Learn more about NJCAA women’s soccer at DCTC by contacting: Learn more about the Alumni Association at DCTC by contacting: Blue Knights defeat Eagles 2-0 to win three in a row On Tuesday, Sept. 30, DCTC won on the road by beating Scott Community College…