Chancellor Malhotra recommends appointment to Minnesota State Board of Trustees

The following is an official press release from Minnesota State:

“Michael has a long history with Minnesota State that is full of professional and personal accomplishments, and he has performed admirably as interim president of DCTC and Inver Hills,” said Devinder Malhotra, chancellor of Minnesota State. “He understands the importance and benefits of fostering and deepening connections between DCTC and Inver Hills, as well as building relationships with their local communities. He recognizes that we must celebrate the two colleges’ distinct programmatic orientations and identities: one as a technical college and the other as a community college. I know he will lead with the same inexhaustible capacity for hard work, positivity, and passion that has served him in all his roles.”

Berndt has served Minnesota State for 20 years, including his current role as interim president of DCTC and Inver Hills since 2018. In this role, his accomplishments have included expanding equity and inclusion work, increasing high school engagement, supporting academic excellence, and engaging community partners in workforce development planning.

Previously, he served as vice president of academic affairs at Century College from 2014 to 2018 where his responsibilities included providing oversight for more than 60 liberal arts and career and technical programs, the library, and several academic support centers across six academic divisions.

He served Normandale Community College from 2008 to 2014 as the dean, associate vice president, and vice president of planning and institutional effectiveness, and as the assistant to the president for strategic initiatives from 2006 to 2008. He was a full-time English instructor at Normandale from 2000 to 2006, and chair of the English department from 2002 to 2004.

He holds a bachelor’s degree from the University of Minnesota Morris and a master’s from Southern Illinois University at Carbondale.

With approval by the Board of Trustees, the chancellor is authorized to negotiate a three year contract with Berndt that will become effective July 1, 2020.

About DCTC and Inver Hills

The mission of DCTC is to provide education for employment. With 55 different programs, the college delivers cutting-edge, skilled, and technical training for today’s most in-demand jobs. Students experience hands-on learning opportunities that help them explore new interests and develop their full potential. Through career exploration and professional preparation, graduates leave DCTC career-ready. They get regular opportunities to meet with employers and to plan for life after graduation. DCTC was included in the 2018 Forbes list of top 25 two-year trade schools in the nation.

Dedicated to the power and promise of education, Inver Hills inspires students, builds careers, and strengthens communities. The college offers nearly 40 degree options that complement programs at DCTC including options designed for students planning to transfer to a four-year college or university or enter directly into the workforce. Nationally recognized as a veteran-friendly campus and ranked one of the top adult-friendly, two-year colleges in the nation by Washington Monthly, Inver Hills prepares students to succeed at a four-year college or enter the workforce.

DCTC and Inver Hills utilize a shared service model in which certain administrative functions are shared by both institutions. The colleges have operated under a shared presidency since 2015. This alignment strategy provides opportunities for the colleges to be more effective and efficient in meeting the needs of students and the communities they serve. The colleges are accredited separately by the Higher Learning Commission, and each enjoys full accreditation status. Located less than 10 miles apart, the colleges offer a powerful and comprehensive range of educational opportunities. Both will celebrate their 50th anniversaries in 2020.

Minnesota State includes 30 community and technical colleges and seven state universities serving approximately 350,000 students. It is the third-largest system of two-year colleges and four-year universities in the United States.

The following is a message from Minnesota State Chancellor Devinder Malhotra:

Following my recommendation, the Minnesota State Board of Trustees appointed Michael Berndt as president of Dakota County Technical College and Inver Hills Community College. I greatly apologize that I will not be able to celebrate with the college communities tomorrow.

I want to thank the students, faculty, staff, and community members who served on the search advisory committee. I greatly appreciate your efforts and insight during this process.

Over the past 20 months, Michael has performed admirably, providing effective and strategic leadership for both institutions. He understands that in order to jointly secure DCTC and Inver Hill’s future, your strategic positioning must be aligned. Since day one in serving as interim president, Michael immersed himself in developing one single strategic plan for both institutions. He recognizes that we must celebrate the two colleges’ distinct programmatic orientations and identities: one as a technical college and the other as a community college. In short, two distinct identities and yet, operating with a unified strategic plan.

Michael recognizes that in order to lead effectively, there needs to be clarity around a shared vision, transparent communication, and consultative structures in place. He is analytical in his approach, intentional in pursuing data-driven decision making, and methodical in his execution. What I appreciate about Michael is that he brings an important strength as a strategic thinker coupled with a comprehensive understanding of the challenges, cultures, needs, and opportunities for DCTC and Inver Hills.

Michael is passionate about developing an organizational ethos aimed at their success, maintaining a laser focus on serving the students and the communities where the colleges are located. I know Michael will lead with the same inexhaustible capacity for hard work, positivity, and passion that has served him in all his roles.

My best to the DCTC and Inver Hills communities, and I look forward to celebrating with you in early fall. 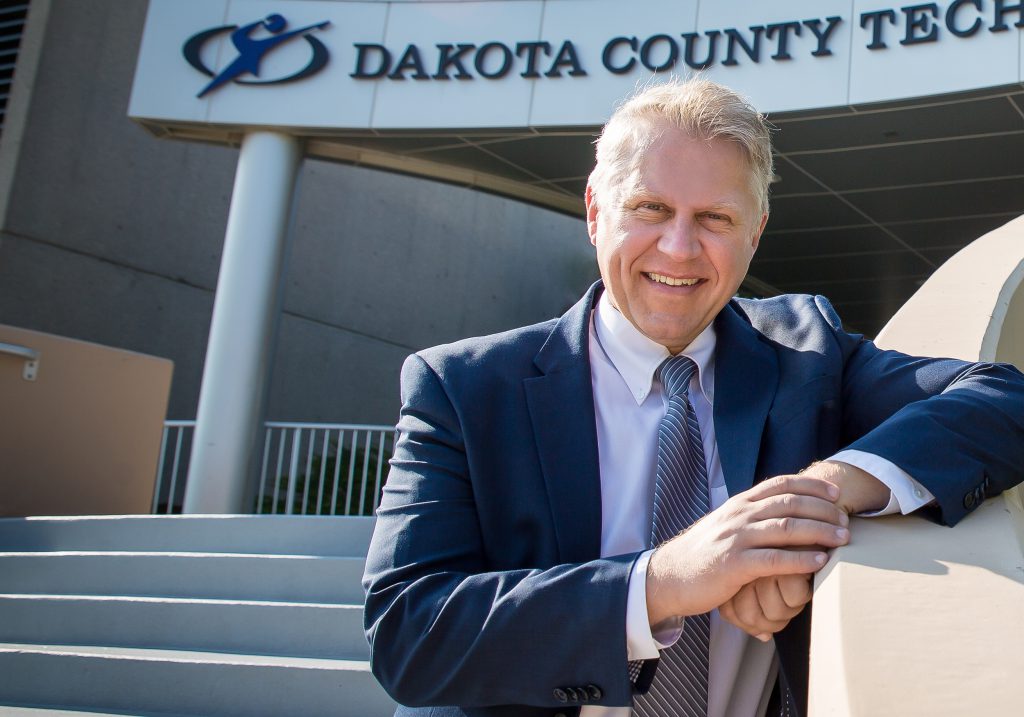 Michael Berndt was recommended by Chancellor Devinder Malhotra to the Minnesota State Board of Trustees, and the Board confirmed the appointment. President Berndt served as interim president of Dakota County Technical College and Inver Hills Community College since July 2018.

Before starting his term as interim president, Michael Berndt served four years as vice president of academic affairs at Century College. He served as dean and vice president of planning and institutional effectiveness at Normandale Community College for four years before going to Century.

President Berndt also worked at Normandale as assistant to the president for strategic initiatives for two years and an English UFT faculty member for six years. He taught English as an adjunct at the University of Minnesota and Augsburg University, and he worked as an ABE instructor in southern Illinois. President Berndt has a Master of Arts (M.A.) in English Language and Literature from Southern Illinois University, Carbondale, and a Bachelor of Arts (B.A.) in English and Philosophy from the University of Minnesota, Morris.

Learn more about the new permanent president at DCTC and Inver Hills by contacting:

Parking permits will no longer be required to park on campus Dakota County Technical College has updated its campus parking policies. For the 2016-2017…