Eugene came up with the idea to start the program while serving as an instructor in the college’s Truck Trailer Mechanic program—back then DCTC was called Dakota County Area Vocational Technical Institute (DCAVTI). Launched in 1974, the new program was named Heavy Equipment Mechanic. Eugene went on to teach at the college for 20 years, retiring in 1994. As it happens, Joel was one of Eugene students, graduating in 1992.

“Starting the Heavy Equipment Mechanic program was a great deal of work,” Eugene said. “I wrote the curriculum and worked with Bob Jarvi, the institute’s transportation coordinator, to get the program up and running. Dave Schroeder was the school’s director of postsecondary education. He was a great director.” 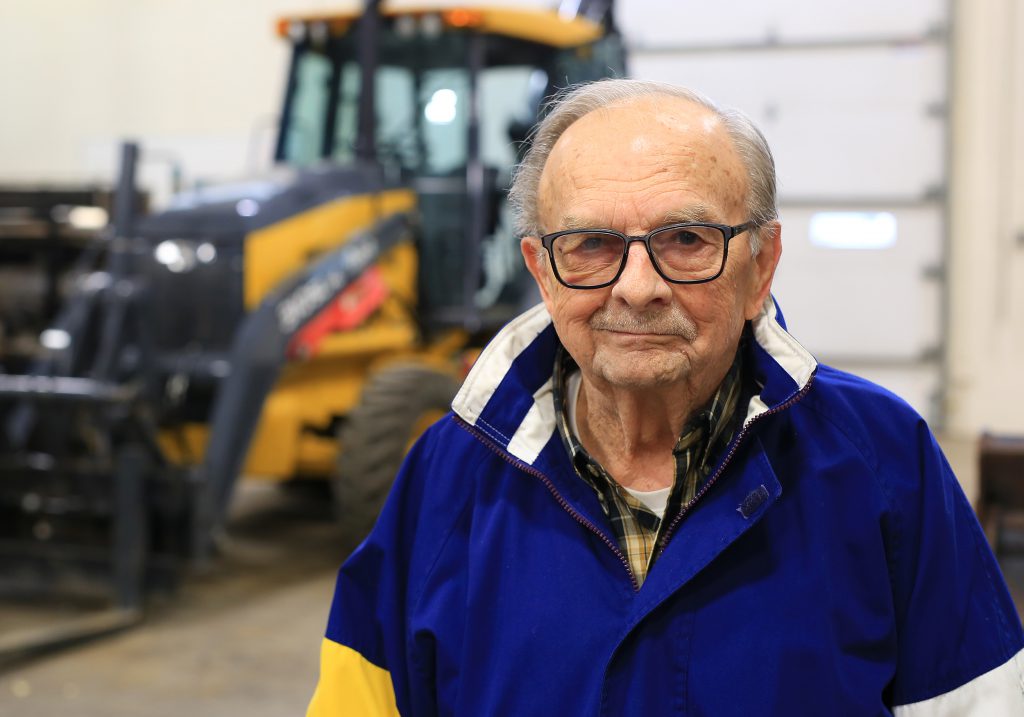 At the age of 18, Eugene joined the U.S. Navy. He served for four years, earning his GED during his time in the service. He graduated from Engineman School at Naval Station Great Lakes in North Chicago, Illinois, and served aboard USS Wyandot (AKA-92), an Andromeda-class attack cargo ship, and USS Opportune (ARS-41), a Bolster-class rescue and salvage ship.

In 1952, Eugene took part in a salvage operation conducted by the crew of USS Opportune in a harbor on the coast of Curaçao, a Dutch Caribbean island. USS Erie (PG-50), an Erie-class gunboat, had been torpedoed in 1943 by U-163, a German submarine. The wreck was a navigation hazard. Eugene helped divers partially raise Erie before towing the gunboat out to sea to sink in deep water.

Returning to civilian life, Eugene worked for two years as a mechanic at an Oldsmobile/International dealership in Farmington, Minnesota. He went on to work for 16 years at Fischer Construction Company before joining the faculty at DCAVTI.

“We started the Heavy Equipment Mechanic program in a building near the current campus,” Eugene recalled. “We shared that building with the Telecommunications and Electrical Lineworker programs. I enjoyed my time teaching. I liked conversing with the students, listening to their troubles and making sure they were successful in the program.”

The man in charge of Dakota County’s heavy equipment mechanics program is another veteran journeyman mechanic, Eugene Thurmes, who oversees the rigid training course that not only includes gasoline engines and every type of diesel, but the whole gamut of on- as well as off-highway equipment.

“We let our students operate off-highway equipment in the maintenance of the gravel roads used by the truck-driving course,” Thurmes added. “We’re making mechanics out of these people, it is true, but it is our firm opinion that a good mechanic should be able to operate the equipment he services. In other words, he has to move the machine in order to diagnose any problem.”

— Excerpt from “The Mechanic Shortage—One Answer”
The Successful Dealer, February 1979 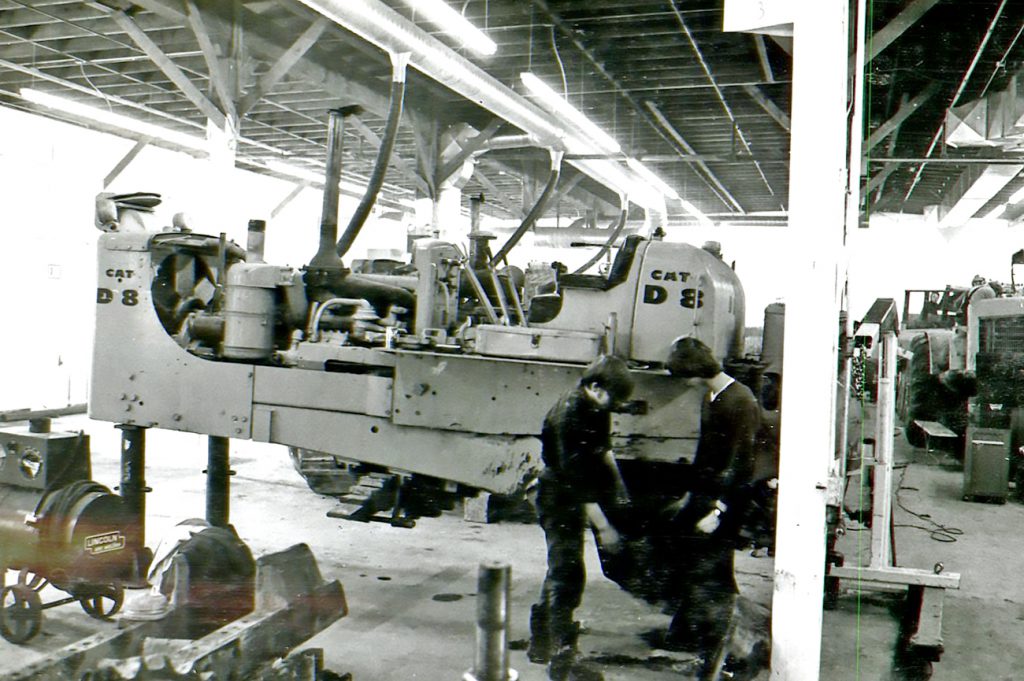 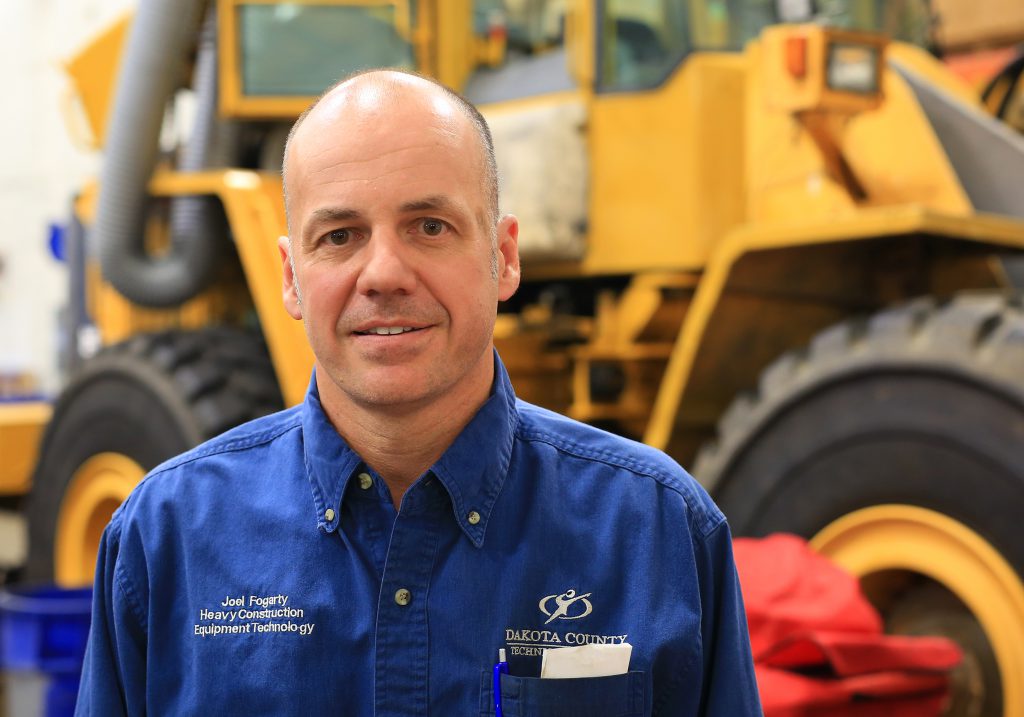 Joel Fogarty recalls his time in the Heavy Construction Equipment Mechanic program at DCTC¹ with fondness. “Gene gave us a strong foundation as heavy equipment mechanics,” Joel said. “We learned the skills we needed to begin our careers in the field. I remember how much I enjoyed learning how transmissions worked. I also remember eating sunflower seeds in the program’s shop and working on a Caterpillar D8 bulldozer. We learned about welding, hydraulics, engines, electrical systems and more.”

After graduating from DCTC in 1992, Joel worked as a mechanic for 10 years at Track II Corporation in Lakeville, Minnesota, and 11 years at Boyer Trucks in Minneapolis. He transitioned to his role as a college instructor in the Heavy Construction Equipment Technology program in 2014.

“I thought about Gene when I made my decision to join the faculty at DCTC,” Joel said. “He made my college experience rewarding and fun.”

Joel reported that the HCET program in 2019 can’t graduate enough students to fill all the job opportunities. “Employers really like our graduates,” he said. “We have room for twenty-six students each year with ten to twelve on a waiting list. Heavy equipment mechanics are in high demand in Minnesota.”

One of the hallmarks of the HCET program is how students start their internships in the field during their first semester in the program. “Employers like the internship model and so do our students. Employers know our students are green, but immersion on the job is the best way to learn. Our students go to school in the morning and head for their job sites in the afternoon. They learn quickly how to adapt to a professional work environment.”

Joel noted that employers not only support the program with scholarships, internships, in-kind donations and jobs for graduates, but they also help recruit new students. Employers that work closely with college include:

“Our graduates receive a great starting wage,” Joel said. “The median wage for heavy equipment mechanics in the Twin Cities is more than $29 an hour. Employers offer our grads hiring bonuses up to $3,000.”

Chief instructor is Gene Thurmes, who worked as a master mechanic before joining the faculty at Rosemount. CE visited DCAVTI on a typical school day. First-year students sat in a class where Thurmes was lecturing on reconstruction of excavator bucket teeth.

In the adjoining shop, second-year students were finishing a day’s work on equipment and components loaned by local contractors and distributors. Class and shop work runs six hours every day, allowing students to help meet expenses with part-time work. Many find jobs in contractor or distributor shops as clean-up crew or mechanic’s assistants.

A more modern shop is under construction on the DCAVTI campus and is scheduled to open later this year. It will include two overhead cranes and a separate room for work on small components.

Repair and maintain very large vehicles, such as cranes, bulldozers, graders, or conveyors.

This career pays above the statewide median wage of $20.07.

This career is currently in high demand.

This career is high growth compared to other careers. There will be a need for about 3,845 new Mobile Heavy Equipment Mechanics to meet market demand between 2016–2026. This includes the demand due to replacement (workers leaving the occupation or retiring) as well as growth. 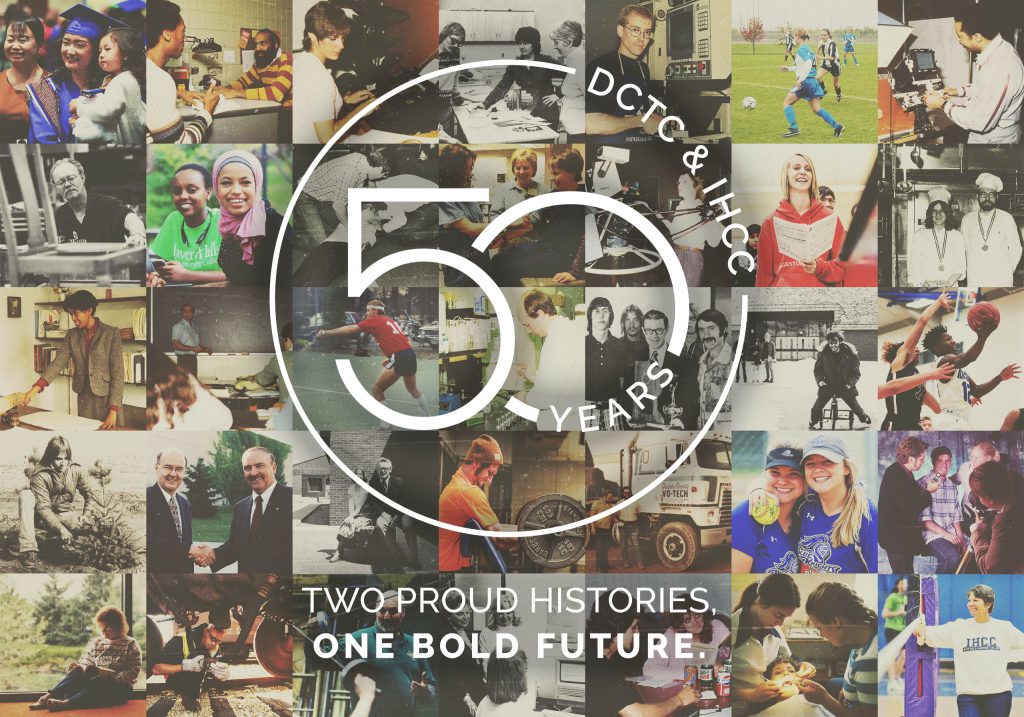 ¹ In 1989, following a legislative mandate, the institute’s name was changed to Dakota County Technical College.

After only six years as part of the Business and Management department at Dakota County Technical College (DCTC), the college’s Business Entrepreneur program has…