Steve Long, 60, a native of El Paso, Texas, is a 2018 graduate of the Brewing & Beer Steward Technology program at Dakota County Technical College. Steve enrolled in the certificate program for two reasons: 1) to learn more about brewing science at a commercial scale; and 2) to find a knowledgeable and passionate assistant brewer for his own craft brewery. 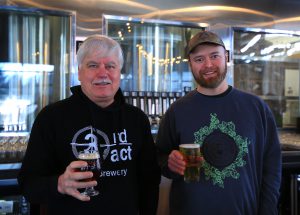 Steve succeeded on both missions. He gained the brewing expertise he needed to launch 3rd Act Craft Brewery, the first ever and only brewery in Woodbury, Minnesota. He also hired a classmate, Brandon Peterson, who stood out in the program as an exceptionally bright, inquisitive and hardworking student.

“Brandon didn’t know he was participating in a yearlong job interview,” Steve said with a smile.

Steve and his wife, Deb, and daughter, Ashley, broke ground on 3rd Act Craft Brewery April 24, 2018, at Bielenberg Gardens in Woodbury, a Twin Cities suburb and eighth largest city in Minnesota with more than 68,000 residents. The family held a soft opening Sunday, November 18, 2018, and a grand opening Sunday, December 16.

“We work as a team at our brewery,” Steve said. “Deb handles the taproom, Ashley’s in charge of social media and I cover brewery operations.”

Journey to the 3rd Act

After graduating from Fabens High School in Fabens, Texas, in 1976, Steve attended the University of Texas at El Paso, the University of Texas at Austin and Texas State University, earning a B.S. in Industrial Sociology with a minor in Chemistry. He went to work for Abbott Laboratories, where his responsibilities were focused on the healthcare company’s production of IV solutions, which undergo a process similar to brewing beer.

Before retiring to start his third career as a full-time craft brewing entrepreneur, Steve worked for 3M for nearly 30 years at the corporate level in human resources, mergers, acquisitions and labor relations. He has also been home-brewing beer for three decades. 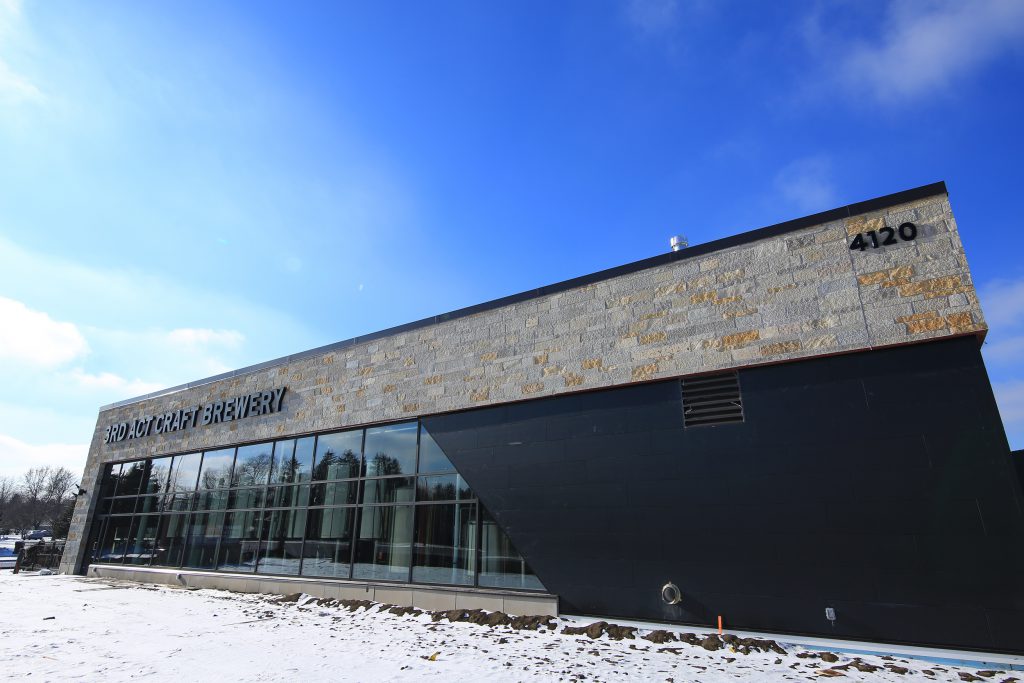 3rd Act Craft Brewery offers several craft beers on tap that are also available in growlers and crowlers, including Badges? We aint got no badges, a Belgian golden strong, And in the morning, I’ll make waffles!, a domestic English stout, A beer fit for gods, a Brüt IPA, and Looks like an angry lizard, a pilsner.

Steve’s wife, Deb, owns her own printing business. She’s also the vice president of Animal Ark. Daughter Ashley, 18, is a freshman at the University of Wisconsin–River Falls, where she’s majoring in business. The family has three cats, Princess, a Maine coon and former street kitten, Caleb, an orange giant, and Cassie, a calico.

Steve is a sailing aficionado. He has captained sailboat adventures on the Pacific and Atlantic oceans as well as the Caribbean and Mediterranean seas. He owns a 34-foot Catalina sloop named Windseeker, which he keeps moored on the St. Croix River in Bayport, Wisconsin, the family’s home away from home during the summer months.

A fan of most water sports, Steve also enjoys jet-skiing, scuba diving and swimming. He resides with his family in Woodbury.

Jeff Merriman is the Brewing & Beer Steward Technology instructor at DCTC. Jeff brings more than 15 years of experience in home brewing beer, along with making wine, mead and cider, to his classroom and brewing lab.

Steve and Brandon were extremely driven, high-performing students in the Brewing & Beer Steward Technology class of 2018. Both absorbed invaluable information not only from the course, but also from their internships. 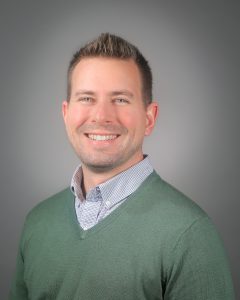 While Brandon spent his time honing his skills in the brewhouse, Steve spent more than 130 hours face to face with the owners and brewers of some of Minnesota’s best breweries.

The insights Steve walked away with have helped him to build a successful brewery while avoiding common mistakes and incorporating industry best practices.

The DCTC Brewing & Beer Steward Technology program is designed to prepare those interested in an entry-level position within the brewing industry. We stress the importance of safety, regulations and quality control, as well as topics in brewhouse operations, microbiology, raw materials handling, and draft system design and maintenance.

The success of our graduates has been astonishing and the beer industry is frequently reaching out to me for their next hire.

Minnesota craft beer is flourishing. Even with the slight reduction in growth of new breweries, I still avoid the word “saturated.” Well-managed breweries with high-quality products, culture and community involvement will continue to thrive.

While tap handles and shelf space are becoming harder to secure, most craft beer consumers are still more than a walk or a bike ride away from their nearest brewery or craft-centric liquor store. 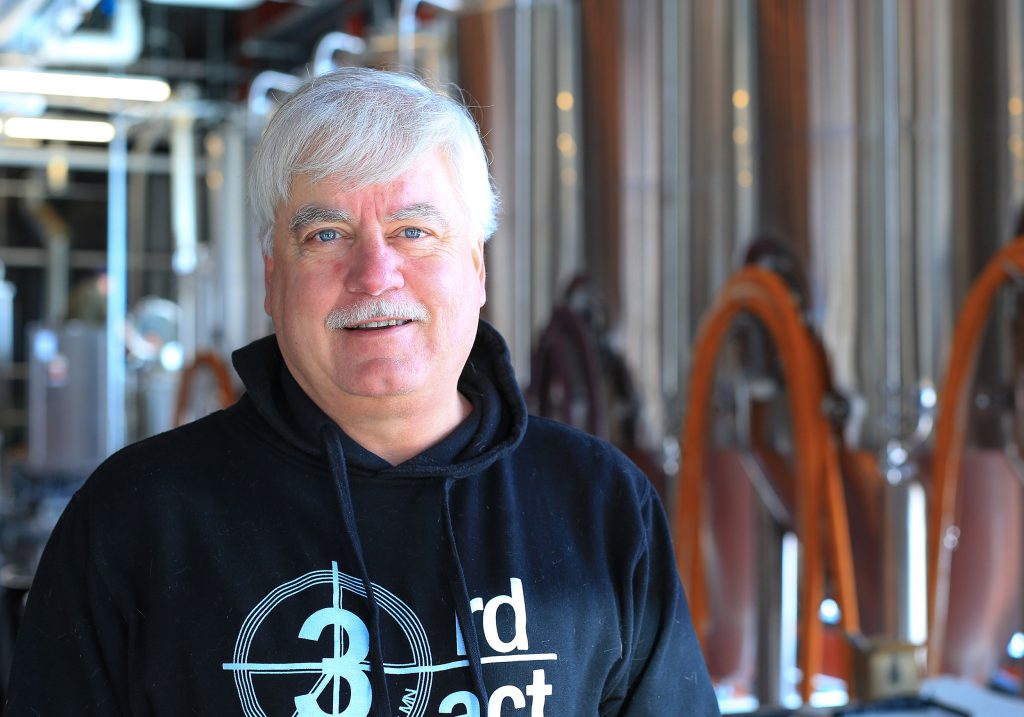 What is the most difficult aspect of brewing science?
The unpredictability of the ingredients and the process. Harvests change, weather conditions matter, your equipment almost never works exactly right. You need the ability to compensate on the fly.

What is the most rewarding aspect of brewing science?
Watching your customers enjoy the finished product. That’s best part of brewing beer.

Three words that describe you as a brewer:
EXPERIMENTAL. SCIENTIFIC. DETAILED.

What is one thing every small business owner should know?
The biggest mistake you can make is getting overextended in debt. I abhor debt.

What is one thing every brewer should know?
Don’t brew what you like. Brew what your customers like.

What country makes the best beer and why?
England. I like porters, stouts and IPAs.

What’s the best beer you’ve ever brewed?
An imperial stout—I hit it on the head. I have no idea what I did right, but that beer came out perfect.

What’s the best beer you’ve ever tasted?
A bourbon-barrel-aged stout from Lift Bridge Brewery in Stillwater.

Why should DCTC alumni stay engaged with the college?
The brewing program at DCTC gave me a whole lot of knowledge and I can give back by hiring the program’s beer tech interns. Brandon and I know how we can make those internship work.

What person has influenced you the most in life?
My wife, Deb. She’s a shrewd businesswoman.

What is the most amazing thing you’ve ever done or experienced?
I love sailing. I own a 34-foot Catalina sloop and I’ve sailed all over the world.

Taking an interdisciplinary approach, the Brewing & Beer Steward Technology program at DCTC prepares you for beer brewing and cellar operations as well as other professional positions in the commercial brewery or brewpub industry. The program also delivers the knowledge you need to work as a beer steward.

The program offers an overview of all aspects of brewing, including the technical skills and knowledge required to excel in these areas:

You will also learn the fundamentals of operations management, marketing and distribution, and financial management for breweries. Overall, the program gives you a solid understanding of brewing science, engineering, management and service. 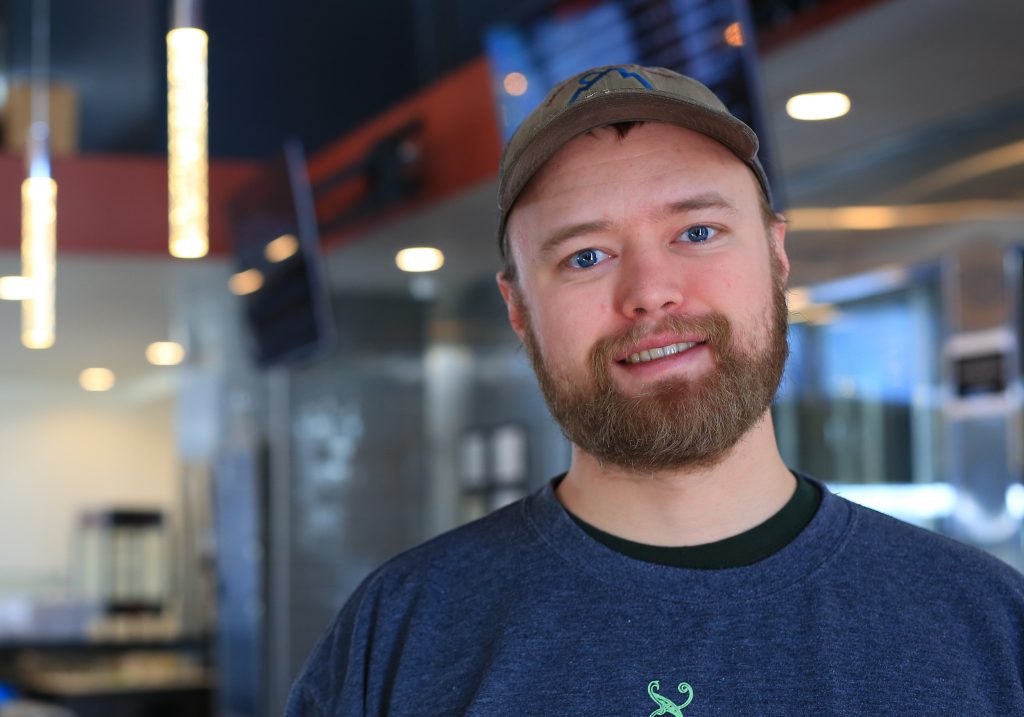 Originally from Sioux Falls, South Dakota, Brandon Peterson, 26, is a 2018 graduate of the Brewing & Beer Steward Technology program. Brandon had no idea Steve Long, one of his classmates in the certificate program, would be his future boss at 3rd Act Craft Brewery.

“One day after class Steve just came up asked me if I wanted a job,” Brandon said. “I was thrilled and couldn’t wait to tell my wife.”

Brandon is a brewer and cellarman at 3rd Act. His job is centered on taking care of crafted beer during the fermentation process. He’s also in charge of making sure everything in the brewery is immaculately clean.

“There’s a running joke in our industry,” he said. “You spend ninety percent of your time cleaning your equipment and 10 percent actually brewing beer.”

Brandon graduated from Washington High School in 2009, a year ahead of schedule. Before steering his career toward craft brewing on a commercial scale, he worked with children at an area bible camp. 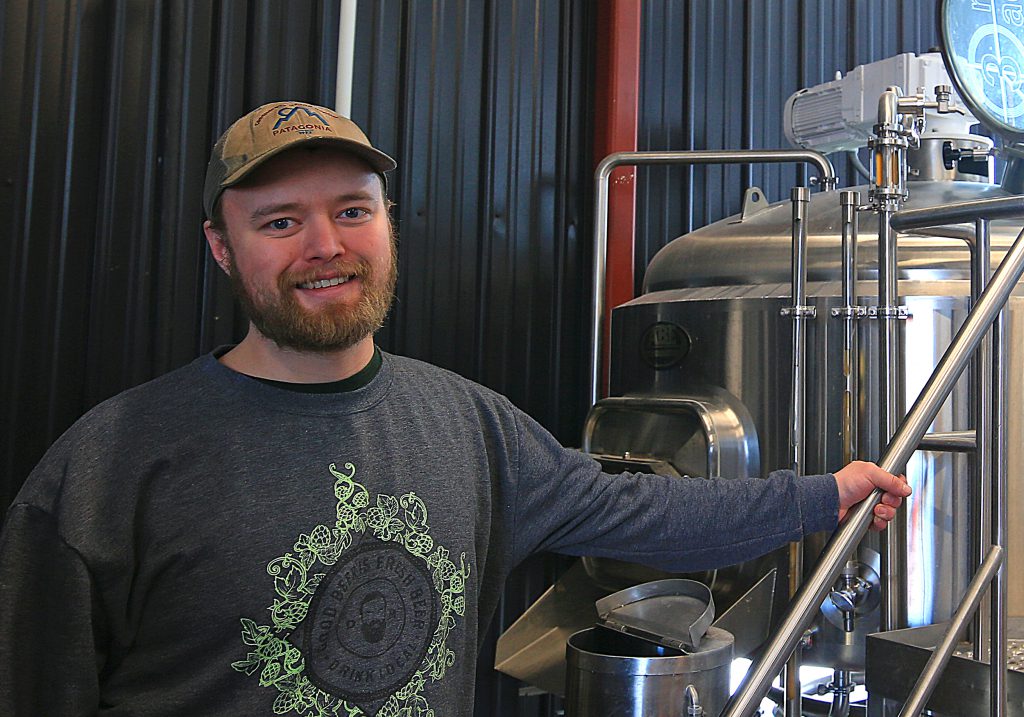 Why did you choose brewing science as your career path?
I enjoy beer and was fascinated by the multitude of styles even though I drank my first beer when I turned 21. I also love the science of brewing beer.

I started taking small steps toward learning about the process of brewing: going to beer tastings and festivals, reading some introductory books and eventually taking an online course through the Siebel Institute. My wife and I settled on the DCTC program because we love the Twin Cities and didn’t want to uproot and move elsewhere to pursue my education.

What is the most interesting aspect of brewing science?
The simultaneous simplicity and complexity. Most beer is made from the same basic ingredients and the variations inside those ingredients are mostly available to everyone. And yet beer looks, smells and tastes so many different ways.

It doesn’t have to be hard or complex to make great beer, but there’s a lot we can and can’t control. The skills of brewers and breweries that consistently make great beer are often at another level. I also believe—and love the fact—that there is a beer style for everyone’s particular taste.

What is the most difficult aspect of brewing science?
Going from a home-brewing setup to a commercial operation. That means gaining experience at scale.

Three words that describe you as a brewer:
CURIOUS. FASCINATED. OBSERVANT.

What is the most rewarding aspect of brewing science?
The constant learning and improving on processes, recipes and base knowledge. Brewing science is truly a craft to be honed; you can continue to fine tune and perfect. I enjoy seeing and experiencing the finished product. I love learning.

What’s the best beer you’ve ever brewed?
The only one I’ve had the privilege of developing: a Brüt IPA true to the desired champagne-like qualities. Dry as a desert, super effervescent, not overly bitter with some muted fruit notes. I’m proud of how that beer turned out.

Brandon and his wife, Lindsey, have a 4.5-month-son named Judah. Lindsey has a Master of Social Work (M.S.W.) from the University of St. Thomas. She’s currently staying home to take care of Judah, but is looking forward to continuing her career as a licensed social worker.

In his free time, Brandon enjoys hiking with Lindsey, especially in state parks. He loves to read books about brewing, self-help and fitness. He also likes imaginative fiction. Brandon and his family reside in Woodbury. 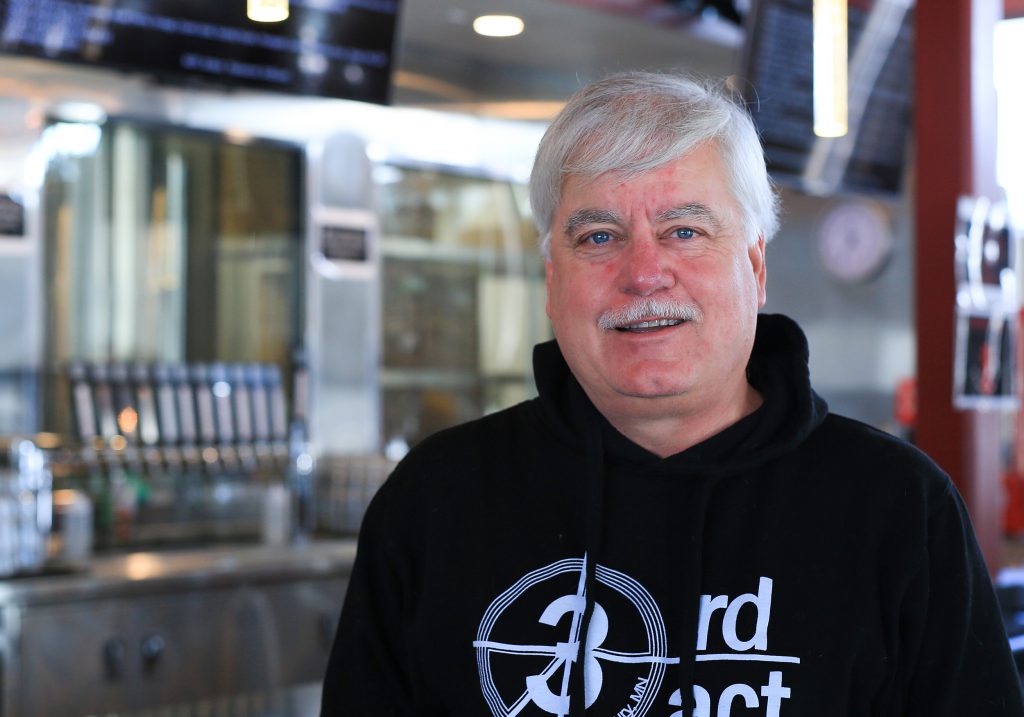