Chris Myrah, 49, is earning a diploma in the Medical Coding Specialist program at Dakota County Technical College. Chris will graduate December 2018 and has plans to continue her education at DCTC as a student in the Medical Administrative Assistant program.

A superb student with a 4.0 GPA, Chris is exceptionally active and engaged on campus, serving as a student senator and Creative Arts and Writing Club president. She helped pay for her schooling by working in the Wellness Center and Career Services. She recently became a peer tutor for her own program of study.

“LeadMN brought me out of my shell,” said Chris, who attended the Minnesota Student Leadership Summit 2018 this past October at the Hilton MSP Airport/Mall of America. “I am much more aware of what’s going on around me. Thanks to LeadMN, I have become passionate about DACA [Deferred Action for Childhood Arrivals]. I want to know what I can do to help.”

Originally from Arden Hills, Minnesota, Chris is a 1987 graduate of Mounds View High School. She went on to earn a Bachelor of Arts (B.A.) in English from Minnesota State University Moorhead. Right after graduating from Moorhead, she moved to Paris, France, to teach English literature at the International School of Paris.

“When I arrived in Paris, I didn’t speak French, I didn’t know anyone and I didn’t have a place to live,” Chris recalled.

Fortunately, she happened to meet a young woman named Cath from Manchester, England. Cath was in exactly the same predicament except that she was also an interpreter who spoke fluent French. Chris and Cath found a place to live and shared a tiny room in a walk-up flat on the sixth floor of a building right next to the Louvre Museum.

“Moving to Paris was the bravest thing I’ve ever done,” Chris said. “Things weren’t all that easy, but none of that mattered. I was in Paris and I loved it! Now when I face challenges, I always look back at that time and think, ‘If I can do that, I can do this.'”

“Chris Myrah makes a positive difference in the lives of others at DCTC. She is a natural leader and is constantly helping others.

“In the classroom, I adopted a Quint Studer healthcare business practice of ’rounding’ with the students by asking who deserves recognition at DCTC. Chris’s name continually comes up as a person who helps other students individually and the class in general.

“Chris was tutoring other students on her own time while carrying her own course load and working. During her heavy load, she still helps others, and her peers report her to be kind and patient. The students she tutors benefit from her bachelor’s degree and experience in teaching.

“Chris very recently accepted a position at DCTC as a medical coding specialist peer tutor. This new role will allow Chris to continue tutoring students on an official basis. Chris is warm, caring and bright—and it is a joy to know her.”

Challenges along the way…

Chris is a recovering alcoholic with 25 years of sobriety. She contends with obsessive-compulsive disorder (OCD) and attention-deficit/hyperactivity disorder (ADHD). You can learn more about Chris’s experiences with OCD and ADHD by reading: “If I can do it, anyone can.”

Other health issues caused Chris to faint in her kitchen while making toast. She wound up breaking 18 bones in her leg due to the fall. She was rushed to the emergency room by ambulance and underwent two hours of surgery. 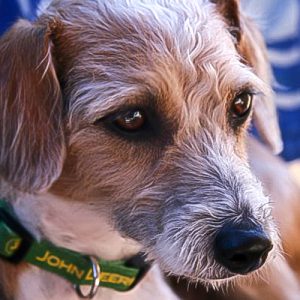 “I spent two weeks in the hospital and then another six weeks in a temporary care facility,” said Chris, who noted that her doctors were unable to explain how the fall broke her leg so severely. “I was in a wheelchair for a year.”

One of her toughest challenges was losing her dog, Jack, a jackapoo who died unexpectedly at the age of nine.

“Jack was my constant companion,” Chris said. “If I moved two feet, Jack moved two feet. He would sit in our bay window waiting for me whenever I was gone. When I was in temporary care, I don’t know who had a rougher time, me or Jack. He was my soulmate.”

The twins, Allie and Justin…

“We called Allison the fat one because she outweighed her brother,” Chris said. “Allie weighed one pound ten ounces at birth; Justin weighed one pound seven ounces. They weighed four pounds when we brought them home.”

Both children overcame obstacles associated with premature birth. Allie earned an Associate of Science (A.S.) in Education Foundations at Inver Hills Community College. She attends St. Cloud State University with plans to become an elementary school teacher. Justin is studying at the University of Wisconsin–Madison with the goal to become an oncologist.

Chris serves as president of the Creative Arts and Writing Club at DCTC. She is an avid writer who published a blog about the exploits of Jack, her beloved jackapoo. She also writes about her family life; friends compare her comedic writing style to the work of Erma Bombeck.

“I have a dry, sarcastic sense of humor,” Chris said.

Normal is as normal does…

When I was 13 years old, my mother died unexpectedly of a brain aneurism. I was devastated. I remember the next morning; I went for a walk with my father. I remember that I asked him if life would ever be normal again. His answer has stuck with me all these years.

“Yes, Chris,” he replied. “Life will be normal. It will just be a different normal than you’ve ever known before.”

Normal is one of those words that has so many different connotations, and can mean so many different things to different people. What got me thinking about it was the fact that we had another Kool-Aid incident the other day. Justin tried to take a completely full one-gallon pitcher of grape Kool-Aid from the refrigerator. I was still sleeping, and I awoke to him tap-tap-tapping me on the arm.

Chris’s boy/girl twins, Allison and Justin, turned 20 on December 18, 2018. Chris and her husband, Jim, have been together since 1989—they were married when she went on her overseas adventure in Paris.

“While it is hard without my dog, Jack,” she said, “I have a new kitten, Chip, who is king of the castle at our house.”

Chris doesn’t have much time for pastimes and hobbies. “All I do is study—I am obsessive about keeping my 4.0 GPA,” she admitted. “But I love to comb through thrift stores and used book stores. I can spend hours in those places. I love reading and writing and being around kids.”

Organize and manage medical data in both paper and electronic systems.

Above the statewide median of $20.07/hour

This career is seeing very high growth compared to other careers.

This career is currently in high demand. Growth rate is 10.6 percent, or well above the statewide average.There will be a need for about 2,985 new Medical Records and Health Information Technicians to meet market demand between 2016–2026. This includes the demand due to replacement (workers leaving the occupation or retiring) as well as growth. 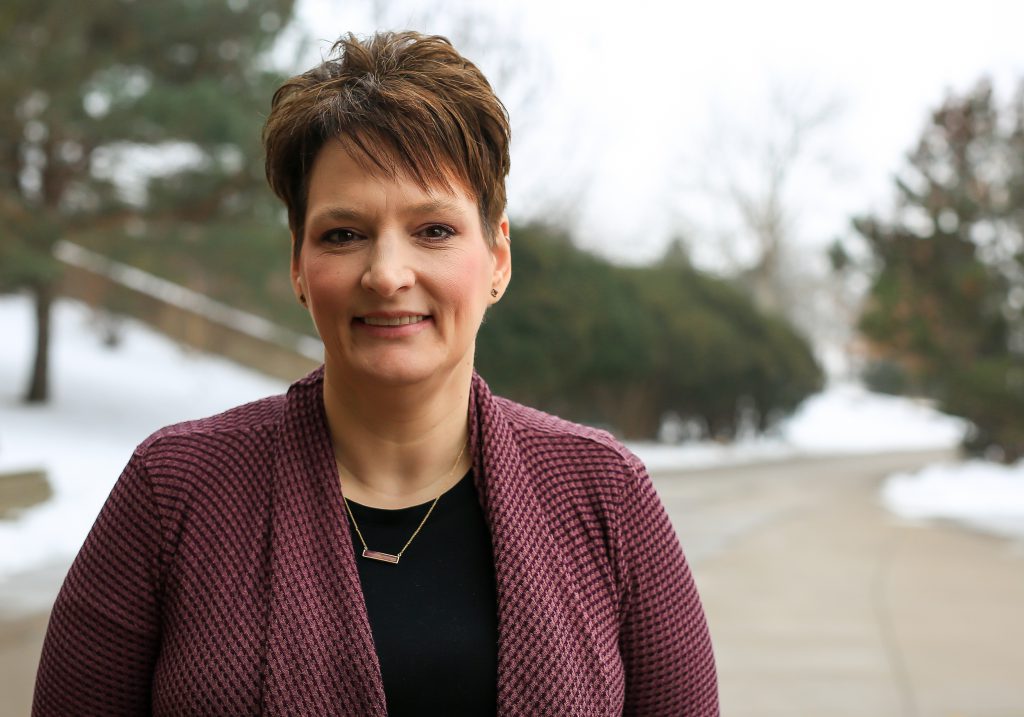 Why did you choose medical coding as your career field?
I chose medical coding because it seemed to have a growing job market and the program was short. Then I got lucky—while I didn’t know much about medical coding, turns out I love it! There are codes for everything. One of my favorites is the code for getting sucked into a jet engine. Another code refers to an accident with a horse-drawn carriage where two good Samaritans drop one of the victims, causing more injuries.

What do you like best about attending DCTC?
Everybody is very caring and supportive.

What do you like best about the Medical Coding Specialist academic program?
I love medical coding. I find it relaxing—it’s like completing a puzzle.

Why should students become involved in extracurricular activities in college?
I didn’t plan on getting involved in anything at DCTC. But becoming involved has made my experience so much better. I have made so many friends and connections, done things I never thought I could do, and it makes coming to school so much more fun when you have friends here! Plus, it really helps your resume.

Three words that describe you as a college student:
OBSESSIVE. HELPFUL. KIND.

What is one thing every technical college student should know?
The more involved you become the better student you will be, the more friends and connections you will have, and your experience and memories will be so much better! Also, take it seriously and study. It matters.

If I can do it, anyone can

What has been your toughest challenge in life?
You pick: I gave birth to twins four months premature. I broke my right leg in 18 places and spent more than a year in a wheelchair. Last summer, the love of my life, my dog, Jack, died. Oh, and I am an alcoholic with 25 years sobriety. I got sober at age 24 and those first few years were really hard.

What person has influenced you the most in life?
Bill W. 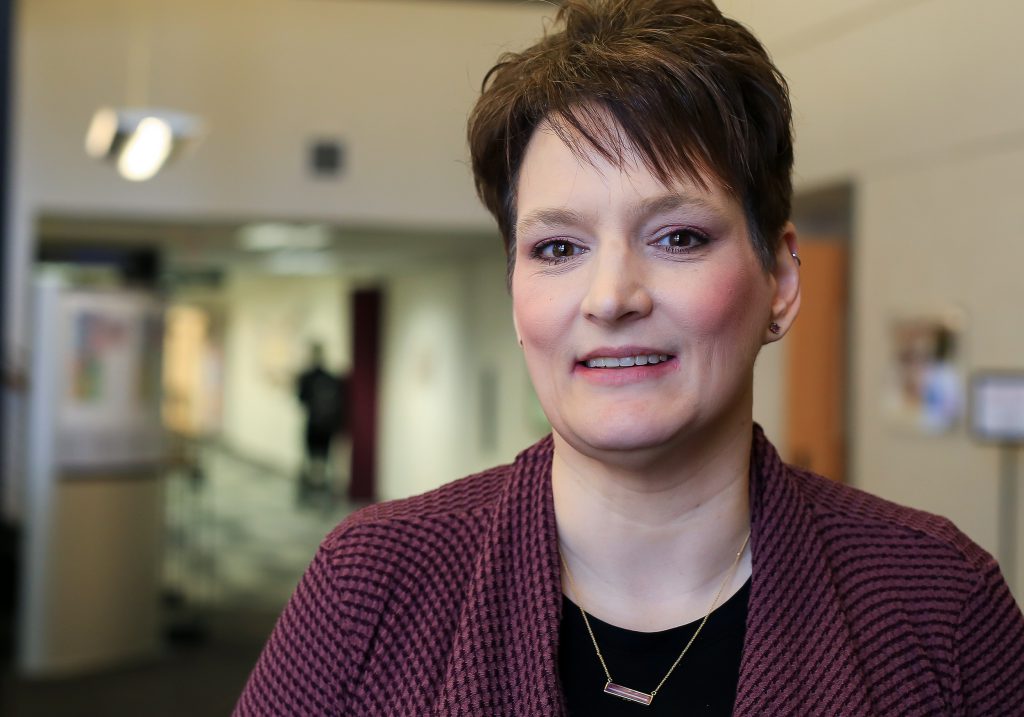 Learn more about the Medical Coding Specialist program at DCTC by contacting:

Learn more about the Medical Administrative Assistant program at DCTC by contacting: