2007 Auto Body Collision grad gives back to the college

Joshua “Cooter” Clemens, 33, grew up on a dairy farm near Owatonna, Minnesota. Josh was in the barn meeting the cows when he was 3 weeks old. As a first-grader, he would complete homework assignments sitting in a feeding trough. He loved doing chores with his grandfather, Vince. No job was too big or too small.

That early exposure to life on a family farm gave Josh a strong immune system and an even stronger work ethic. Today, he often works seven days a week as the owner/builder of Barnwood Customs, a specialty furniture business with a showroom in Forest Lake, Minnesota, and Twin Stacks Enterprise, a collision repair business focused fiberglass work on heavy-duty semi tractors and boats. Josh also puts in long hours farming during the planting and harvesting season. His motto is “Bred to Work.”

“I want to build something that has character. I like making one of a kind. I’m not interested in quantity.”

Josh also enrolled in the Auto Body Collision Technology program. He checked out the college’s Wood Finishing Technology program, but his interests were centered on building his own furniture, not restoring antique pieces.

“I took advanced woodworking courses all through high school,” he said, noting that creating original furniture out of barnwood and other specialty woods has always been his passion. “I decided to earn a degree in auto body because I knew how to weld and spread mud. I’ve always liked working with my hands.”

Josh did not fair well in his general education and elective courses. He couldn’t relate to classes on psychology or trigonometry and was suspended for poor grades. He met with a college committee to review his case and persuaded them to give him another chance.

“I explained that I did really well in my auto body courses because that’s what I really wanted to do,” Josh said. “I went from academic probation to suspended to reenlisted to making the dean’s list.”

After graduating from DCTC in 2007 with an Associate of Applied Science (A.A.S.) in Auto Body Collision Technology, Josh went to work as a technician for Fairway Collision & Automotive, a family-owned business in Vadnais Heights, Minnesota. He was working part-time as a bartender to help pay for his schooling when he learned about the job opportunity from a coworker. He met with Cary Lund, a co-owner of Fairway, and later interviewed with Kevin Lund, another co-owner. He was hired and went on to work for Fairway for nine years, building a close relationship with the Lunds and co-owner, Pamela Caruth.

“When I was ready to start Twin Stacks Enterprise, I gave Kevin, my boss at Fairway, one hundred and eighty days notice, but I don’t think he thought I was serious,” Josh said. “I reminded him at ninety days and then at thirty days—and that’s when he realized I was going to launch my own business.”

“When I started out, I was making and selling ammo boxes and mirrors—and that was bringing in enough money to pay the mortgage. I’ve never been in this to make a quick buck, but I like the idea of making a living from something I’ve made.”

Josh continued increasing his reach as an entrepreneur and started Barnwood Customs. He had a partner in the early going, but he bought him out and has owned the business outright for more than five years. He has accumulated zero debt and does not believe in credit cards.

“I remember watching Little House on the Prairie as a kid,” Josh said. “They had to save up for everything. If you don’t have it, you don’t get it. That’s how I am. I’m massively independent.”

Barnwood Customs has a showroom located upstairs in Lakes Floral Gift & Garden in Forest Lake. Josh’s long-range career goals include raising and shipping hay by the truckload under contract with California horse ranchers. He would also like to raise feeder cattle and have an Amish-built barn with animals below and a wood shop up top. 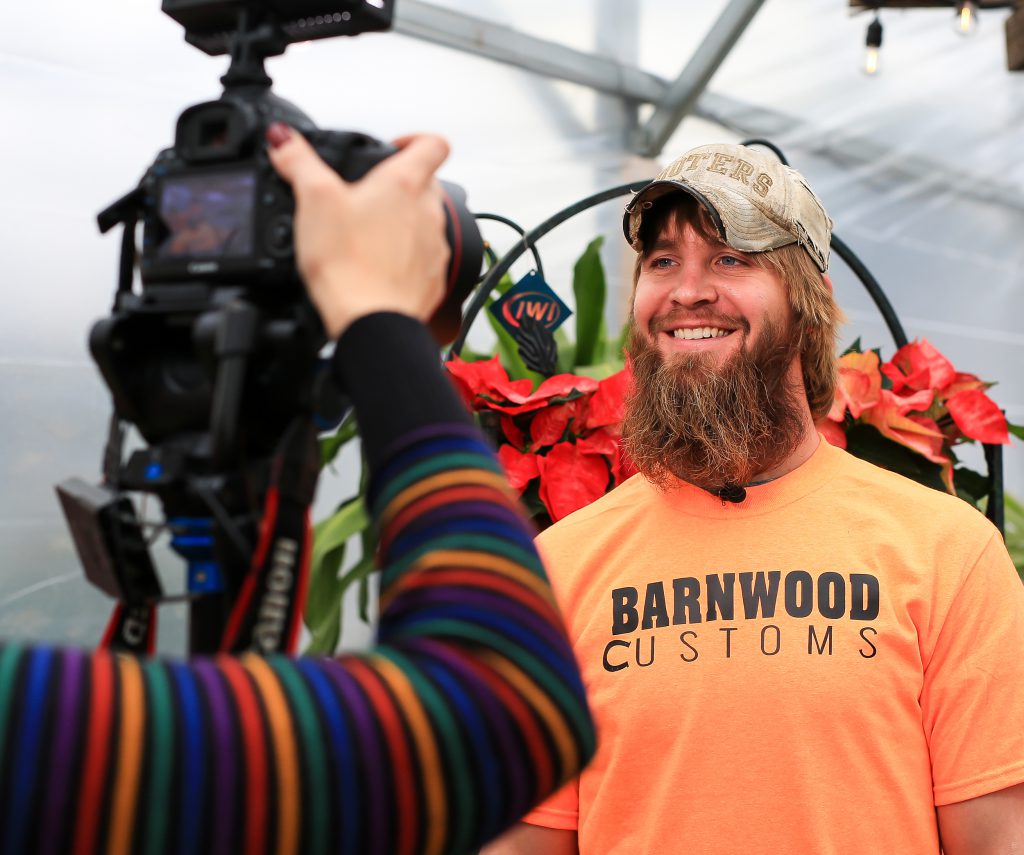 Giving back to the college…

Josh has a pay-it-forward attitude. His education at DCTC helped him build a career and eventually start his own business. He decided he wanted to find a way to help students make the most of their time in college.

“My stepdad, Tony Seykora, is a professor at the University of Minnesota,” Josh said. “He, as well as my mom, Rel Seykora, have inspired me to become more involved as an alum.”

Josh contacted Jessica Ayub, director of career services at DCTC, and asked what he could do to give back to the college. Jessica put him in touch with Amy Eppen, foundation development director. When Amy learned Josh built custom furniture, she suggested he make a piece that would serve as a live-auction item for the True Blue Gala: Homecoming 2017. Josh created a bar using wood reclaimed from his family farm. The bar went for $1,200.

Annual giving at DCTC is simple. Each year, alumni, students, parents and industry partners choose to fund everything from books to equipment to scholarships. These donations provide resources to students, the college and our programs, upholding our mission: Education for Employment.

By supporting DCTC, you’re not only helping make technical education the best it can be for students and faculty, you’re also doing your part to meet the workforce needs of the Twin Cities south metro area.

With your contribution to DCTC, we’ll be able to assist our students by improving technology, expanding teaching and learning resources, and enhancing hands-on training opportunities.

HUGE thank-yous to Josh Clemens, 2007 alumnus and owner/builder of Barnwood Customs in Forest Lake, Minnesota, for offering a $1,500 match AND Ziegler CAT for matching employee donations for the second year in a row.

Josh is married and his wife, Jennifer, 42, works as a safety and compliance billing manager for Copeland Trucking, a family-owned business in Fridley, Minnesota. Josh has two stepdaughers, Erika, 25, and Shelby, 21, and two grandchildren, Ashley James, 5, and Aurora Haily, 1.

Josh and Jennifer also have three boys, bull calves named Josh Jr. and Jasper, both Jerseys, and Red, a Holstein/Montbéliarde. When Josh isn’t working, which is basically never, he enjoys fishing for bullhead and catfish plus hunting deer, turkey, geese and pheasant with his grandfather, Vince, who is in his 80s. Josh also loves to race go-karts with Jennifer.

“That’s one of the funnest things we do,” Josh said. “We go out of our way to find places to race each other in go-karts.” 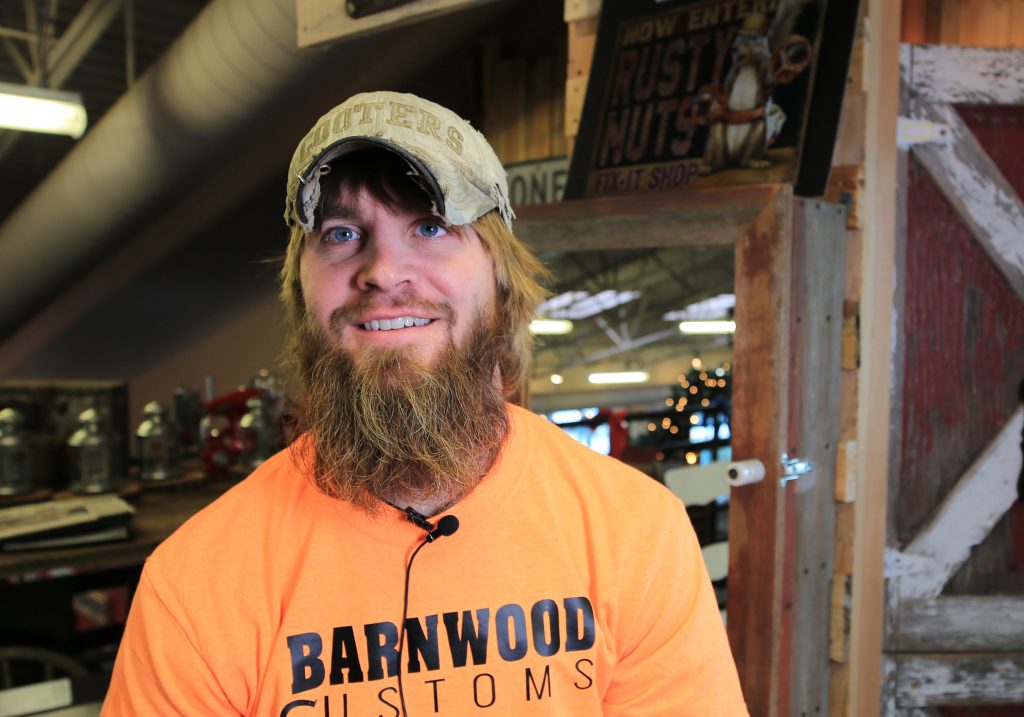 Why did you originally choose auto body collision as your career field?
I wanted to take woodworking, but DCTC did not offer that program. Auto Body turned out to be the right choice.

How did the DCTC Auto Body Collision Technology program help you enter the field?
My A.A.S. degree was attractive to employers.

What advice would you give students considering auto body collision as a career path?
Learning in school is one thing, but on-the-job training is a big part of being successful.

What did you like best about working in the auto body collision field?
Working for a family-owned business like Fairway Collision & Automotive. Ninety percent of my Barnwood Customs jobs are connected to the network I developed working at Fairway.

Why did you start your own business, Barnwood Customs?
After partnering at the beginning, I found I would be happier as an independent business owner.

Three words that describe you as a professional in your field:
BRED. TO. WORK.

What is the most challenging aspect of running your own business?
The politics of working with different kinds of customers can be challenging.

What is the most rewarding aspect of running your own business?
I can take personal time to farm with my grandpa.

What is one thing every small business owner should know?
Eye contact and a handshake go a long way.

Why should other DCTC alumni stay engaged with the college?
You can make a difference by giving back.

What person has influenced you the most in life?
My grandpa, Vince Thiele 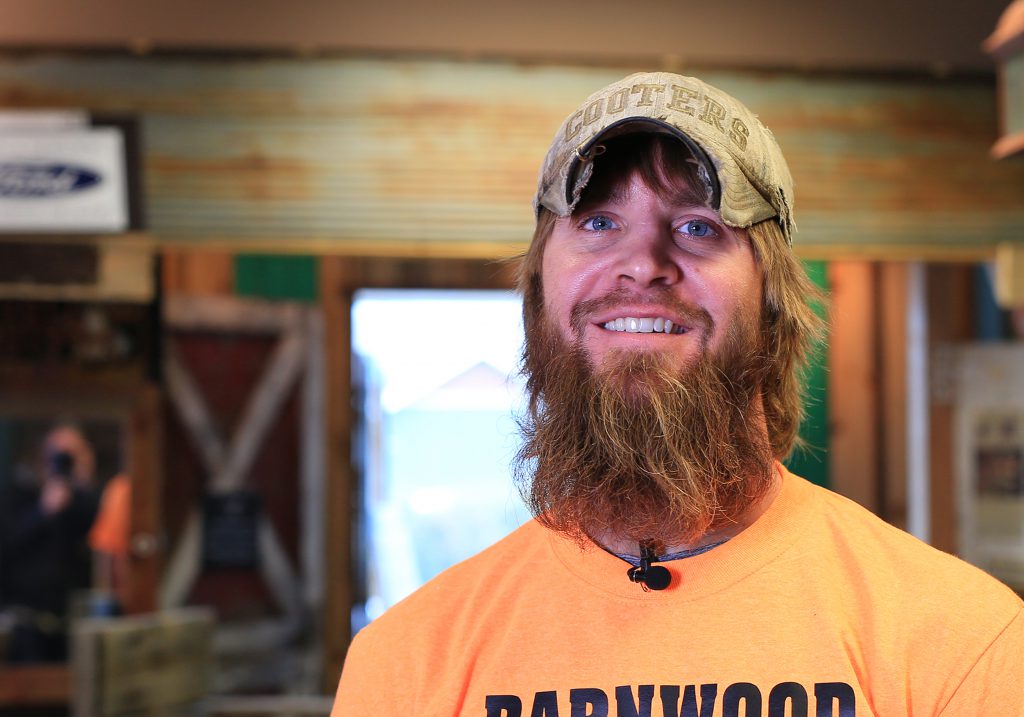 Learn more about the DCTC Foundation and Alumni Association by contacting:

At Dakota County Tech, produce and students’ expertise both grow   By Christopher Magan, Pioneer Press reporter A group of students at Dakota County…