According to Natalie Gross at Military Times, colleges and universities across the U.S. were invited to fill out a 150-question survey regarding institutional services offered to current and former military service members and their families.

“To create the rankings, we evaluated colleges’ survey responses based on what veterans have told us is important to them, as well as on our own editorial judgment,” Gross writes in her article, “Methodology | Best for Vets: Colleges 2019.” “We also factored in data from the Veterans Affairs and Defense departments, as well as three Education Department sources: the IPEDS Data Center, College Scorecard data and the Cohort Default Rate Database. Broadly speaking, institutions were evaluated in five categories: university culture, academic outcomes/quality, student support, academic policies, and cost and financial aid.”

Anne Johnson, MBA, associate vice president of student affairs at DCTC, reported that the college is committed to supporting students who have served or are serving in the U.S. Armed Forces. That support extends to military family members. 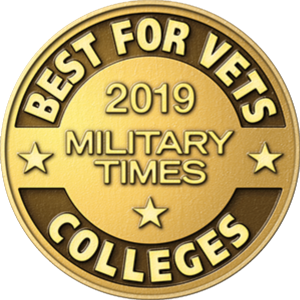 “It is an honor to be acknowledged in the Best for Vets College rankings,” Anne said. “Dakota County Technical College is committed to serving veterans as we believe this is one way we are able to give back to those who have served the United States. We value veterans and are positively impacted through their studies and activities on the college campus and in our local community. Faculty and staff are excited veterans have chosen DCTC as their place to continue with their educational journey.”

Giulia Occhino is a Practical Nursing major at DCTC with plans to graduate May 2019. A U.S. Navy veteran, Giulia served during Operation Desert Shield and Operation Desert Storm in the Gulf War in the early 1990s. Her rate was electrician’s mate (EM).

“I proudly served aboard USS Samuel Gompers (AD-37), a destroyer tender,” Giulia said. “They did not allow females to serve on combatant vessels back then. I am originally from Seattle, Washington, but I joined the Navy when I was 18 and spent most of my life in the southeastern part of the United States.”

Giulia pointed out that Veterans Services at DCTC has been a lifesaver for her. “The personnel that assist student-veterans showed me what I needed to do and where to start,” she said. “I was lost when I first came to the school and they showed me the way.”

Giulia added that she is a newly single mom with two children. “The folks at the Veterans Services office have helped me get my educational needs in order,” she said. “I thought because I was an older veteran that I would not be a priority. They made me feel like I was the only one and I love that!”

“Working with the veterans on campus is a privilege. They have served our country—and being able to serve them on their higher education path is a humbling experience.

“As the college’s certifying official, I’ve had the opportunity to work with every veteran on campus on using their education benefits. It’s been a great experience to help them accomplish their goals of completing a trade program or earning a degree, or helping them prepare for a degree at the four-year level.

“At DCTC, our staff is committed to supporting veterans and their families with their veteran education benefits and beyond. We are here to help our veterans achieve their specific goals at DCTC. We also help them plan for academic and career success after their time on our campus.”

Below is the Military Times official news release…

VIENNA, VA—Military Times today unveiled its Best for Vets: Colleges 2019 rankings. In their ninth year, the rankings are based on the results of Military Times’ annual survey—the most comprehensive school-by-school assessment of veteran and military student services and rates of academic achievement—as well as a detailed review of public data collected by federal agencies.

As is true for all Military Times rankings, Best for Vets: Colleges is an editorially independent, objective and rigorous news project. This feature evaluates the many factors that help make colleges and universities a good fit for service members, military veterans and their families. About 500 colleges took part in this year’s survey.

“Military Times’ Best for Vets designation is trusted throughout the veteran community as the mark of excellence for schools and other organizations that work with veterans, service members and military families. It can’t be bought with advertising dollars—unlike some other supposedly veteran-friendly rankings—only earned through a record of steadfast service and dedication to those who have served,” said George Altman, the Military Times editor in charge of the rankings.

“Fewer than half of the roughly 500 colleges and universities that competed for the recognition earned the right to call themselves Best for Vets in 2019. Their efforts should be commended.”

The Military Times digital platforms and newsweeklies are the trusted source for independent news and information for service members and their families. The military community relies on Air Force Times, Army Times, Marine Corps Times, Navy Times and Rebootcamp for reporting on everything important to their lives, including: pay, benefits, finance, education, health care, recreational resources, retirement, promotions, product reviews, and entertainment. Military Times is published by Sightline Media Group.

Sightline Media is a global, multi-platform media company serving the U.S. military, federal government, the defense and federal IT sector, and the international defense community. Sightline’s media brands include the Military Times (Army Times, Navy Times, Air Force Times, Marine Corps Times and Rebootcamp), Defense News, Federal Times, C4ISRNET and FifthDomain.com. These brands are the go-to source for news and information about the U.S. military and the technology, business, politics and programs of federal and global defense markets.

In addition to being posted on Rebootcamp, the rankings are published in Military Times print products—Army Times, Navy Times, Air Force Times and Marine Corps Times—sold on newsstands and sent to subscribers the week of October 22, 2018. They are also promoted throughout the Military Times social media channels.

More about Veterans Services at DCTC…

Dakota County Technical College has shown its commitment to being a veteran-friendly campus by being proclaimed a Beyond The Yellow Ribbon Company in 2010, opening a newly remodeled Military and Veterans Service Center in 2016, and being ranked in the top 10 nationwide two years running (2018 and 2019) by Military Times: Best for Vets.

DCTC is dedicated to meeting the needs of student-veterans and active-duty service members. Some veterans face personal, relationship, education and employment challenges. Veteran’s families also may need support while their loved ones serve overseas and when they return home. Working with the Minnesota Department of Veterans Affairs, DCTC provides additional training on supporting veterans to counselors, student affairs staff, faculty and administrators. Read more…

Learn more about Veterans Services at DCTC by contacting:

Ryan Goeres spotlights the value of collaboration in a field he loves Ryan Goeres, 34, graduated in 2005 with an A.A.S. degree from the…