Two Dakota County Technical College students, Oceania Nolan, 22, a Heavy Duty Truck Technology major, and Oliver Sutton, 24, a Dental Assistant major, were heading out Monday, March 18, 2018, around 7 p.m. after a routine day of classes on the college’s main campus in Rosemount, Minnesota. Twilight had engulfed the entire county from Mendota Heights to Miesville. The temperature had just dipped below 40 ºF. A light breeze rustled dead leaves; the sky was overcast.

“Oceania was driving her Chevy Malibu,” Oliver recalled. “I was in the front passenger bucket. She had stopped by the electronic sign on County Road 42 and I was wondering if we should swing by Potbelly, you know, in Eden Prairie, to get something to eat before she dropped me off at my apartment. That’s when Oceania let out this weird, squeaky shriek and gripped my arm so tight I still have bruises.”

“I couldn’t find my iPhone,” Oceania said. “That’s all I was thinking, ‘Where’s my freaking phone!?’ We needed to get video or at least a photo, that was the crucial thing—and all Oliver had was his stupid flip phone.”

Oceania clucked her tongue, but then nodded grudgingly in acknowledgement. “Well, I guess Oliver did get the shot. Just one, though, because the creature suddenly glared at us—”

“Like it was memorizing our DNA,” Oliver interrupted. “So it could track us down later, right? I thought I was going to throw—”

“—and then it just slipped into thin air like it knew how to move between dimensions,” Oceania continued. “That’s the most scared I’ve ever been in my whole life.”

Digital experts weigh in on the evidence… 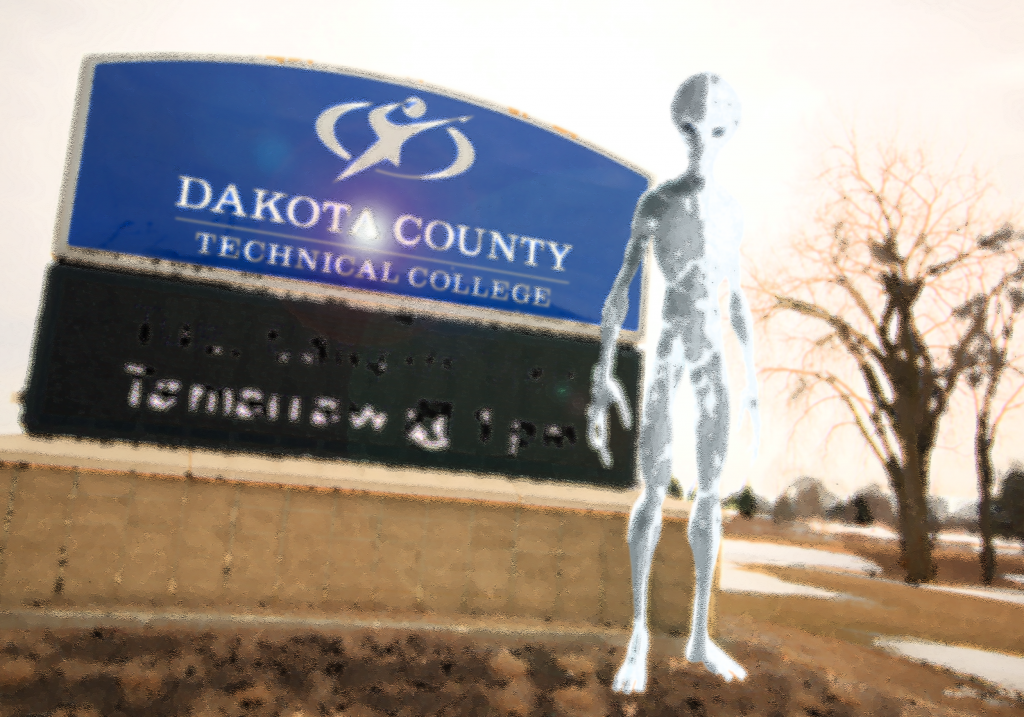 Oceania and Oliver briefly considered bringing their photo to area media, but decided their sighting would be rebuffed as a hoax. They opted to contact the college’s celebrated Photography department as a surefire way to verify the photo’s authenticity.

After three hours of open-source research on the Internet, a team of photography faculty, alumni and students identified the subject of the photo as the Blotchwood Shambler, an obscure cryptid with perhaps five or six unconfirmed sightings in Dakota County. They then analyzed the photograph’s original digital file with scrupulous precision and eventually ruled out Photoshopping or pixel manipulation of any sort.

“I mean, the usual giveaways like shifting light, anomalous metadata and sketchy compression are just not there,” said Scott Glime, a 2017 graduate of the Photography program. “If this image has been doctored, the skill required is simply beyond human comprehension.”

Photography student, Parson Fuller, concurred. “I probed that image from a zillion different angles and discovered zip for subterfuge—and I know what I’m doing,” he said. “On top of that, the entire time I’m getting this icky, twitchy feeling. Like, why am I still sitting here, man? I need to get up and book because the Blotchwood Shambler is ready, no, aching to reach out of my iMac monitor and grab my face with those hideous hands. Yeah, let’s just say we’ve started using the buddy system in the college’s photo labs.”

More about the intrusive cryptid… 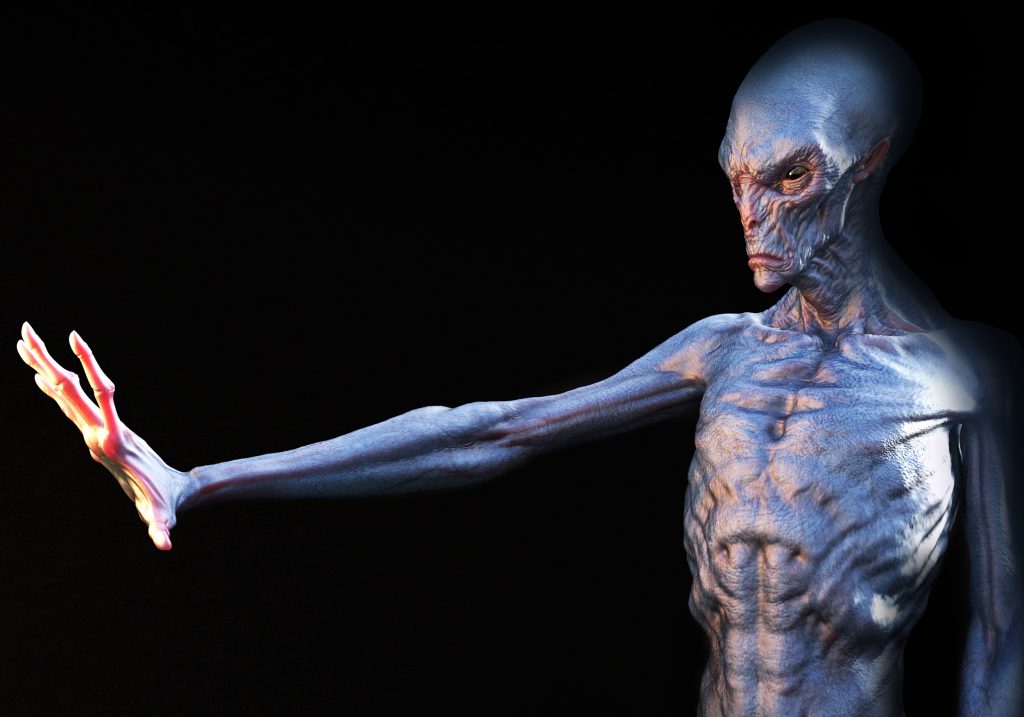 Artist’s conception of the Blotchwood Shambler

First off, what the heck is a cryptid?

Daniel Diefenbach, PhD, a tenured professor of cryptozoology at the University of Minnesota, Twin Cities, provided DCTC News with the following explanation.

“Okay, you’ve got your cryptid, but you need a working definition for the term. Here’s one I’ve always preferred: Most any animal or organism or whatnot with a disputed or unsubstantiated existential profile. For example, we can check off the yeti, the Chupacabra down in Mexico, Brazil, Peru and so on, the Jersey Devil, and that Pope Lick Monster out of Kentucky—I could keep going for as long as you want.” 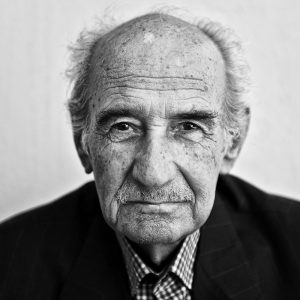 Daniel Diefenbach, PhD
Photo courtesy of the U of M

The world-renowned cryptozoologist went on to declare that cryptids in a baffling variety of forms dwell on all seven continents with an alarmingly high concentration located in North America, particularly in the Upper Midwest of the United States. In terms of paranormal biodiversity, Minnesota is considered a cryptid hot spot.

“Obviously, the Blotchwood Shambler isn’t as well known as secretive superstars like our old friend, Sasquatch,” he said, “but Blotchy is something of a celebrity for seasoned cryptid hunters who stake out the more haunted venues of UMore Park.”

At this point in his explanation, Professor Diefenbach is referring to the abandoned World War II munitions plants that populate UMore Park, a 4,800-acre U of M research and agrosecurity zone, like ghoulish castles.

“The park and its mysterious structures are the ideal stomping ground for nature’s most unnatural entities,” he pointed out with a low whistle. “UMore basically surrounds your college on three sides. Makes perfect sense a cryptid might wander on campus for a quick reconnoiter now and then.”

“Those college kids should get medals,” he said. “I would suffer a runaway panic attack if the Blotchwood Shambler turned up loitering on the U of M campus—and I study these transdimensional rascals for a living.” 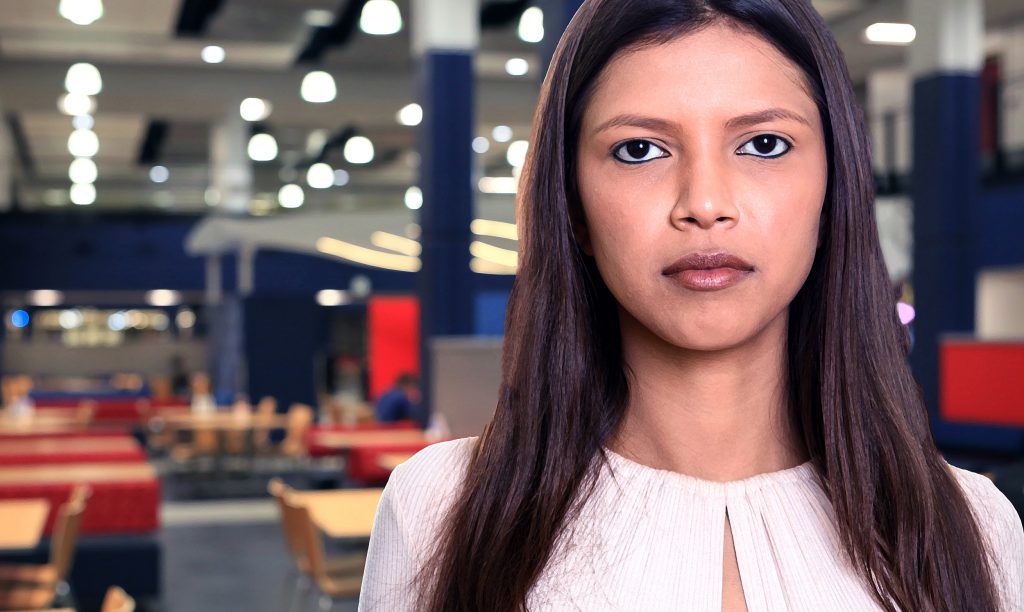 Born in Jomsom, Nepal, a hill station in the Himalayas within trekking distance of Annapurna (26,545 feet), the 10th highest mountain in the world, Oceania Nolan moved with her family to Minnesota when she was 12 years old. Oceania is a graduate of Eden Prairie Senior High School, Class of 2014. She was active in sports, lettering in soccer and basketball.

Oceania is pursuing her Associate of Applied Science (A.A.S.) in Heavy Duty Truck Technology. Her father, Isaac Nolan, owns Nolan Continental Transit, a transnational trucking company based in Chaska, Minnesota. Her four older brothers work for the company as long-haul truckers. Oceania wants to become a service technician qualified to work on the biggest, most sophisticated rigs on the road.

“I’ve always been great with my hands and I have a natural understanding of diesel engines,” she said. “Clutches, transmissions, drive axles, high-end electronics—troubleshooting those critical functions just comes easy to me. My dad is buying a new fleet of Peterbilt 579 Ultralofts with PACCAR MX-13 engines and Platinum interiors. I can’t wait to start working on them.”

One thing you most want to accomplish in life:
“Finish up this go-round without running into another cryptid.”

A member of Phi Theta Kappa and active in SkillsUSA Minnesota, Oceania considered trying out for the Blue Knights women’s soccer team, but decided she wasn’t ready to commit herself to the rigors of collegiate athletics.

“I’m a better than pretty good midfielder, but I just wouldn’t have enough time to give my all for my teammates,” she said.

When she’s not studying, working for her dad or helping out with her mom’s kombucha mushroom business, Oceania enjoys reading historical novels and watching Netflix original series like Girlboss and The Crown. She made a point of telling DCTC News she would be steering clear of Stranger Things for the foreseeable future.

Oceania also likes hanging with her “super-neurotic” cat, a 4-year-old Russian blue named Putin. She lives at home in Eden Prairie with her parents and her widowed aunt, Mrs. Kithwidge.

“No way I’m letting this too close encounter capsize my life,” Oceania insisted, referring to her terrifying brush with the Blotchwood Shambler. “I am keeping my eyes on the prize and earning my college degree.”

Three words that describe you as a college student:
AMBITIOUS. INVENTIVE. MISCHIEVOUS.

Maintain or repair any type of diesel engine.

Above the statewide median of $19.62/hour

This career is currently in very high demand and is seeing very high growth compared to other careers. Growth rate is 11.9 percent, or well above the statewide average. There will be a need for about 1,930 new Bus and Truck Mechanics to meet market demand between 2014–2024. This includes the demand due to replacement (workers leaving the occupation or retiring) as well as growth. 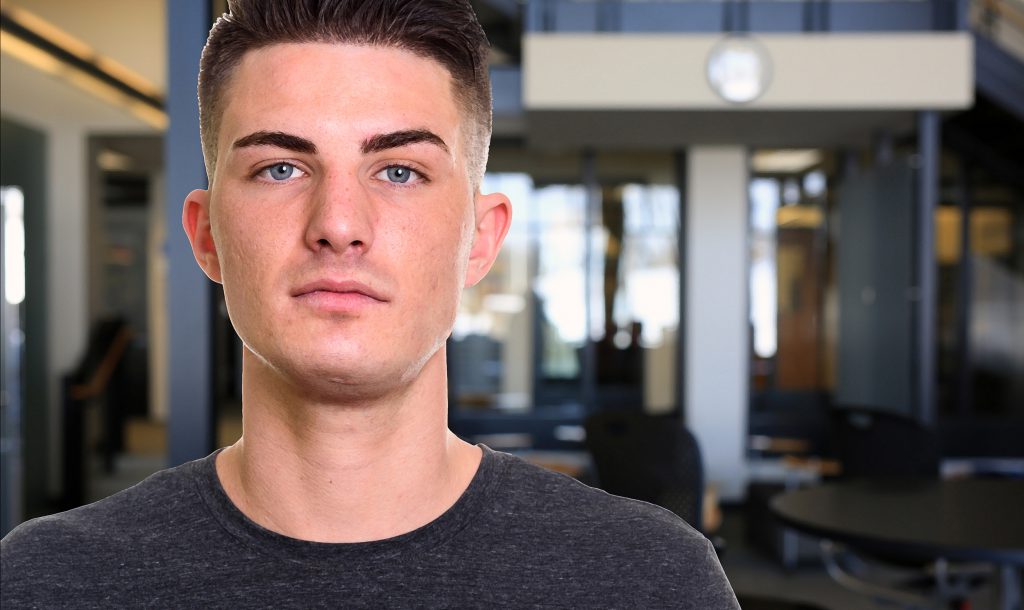 Originally from Milwaukee, Wisconsin, Oliver Sutton spent the first six years of his life in St. Dominic de Guzman Orphanage. His parents, Cletus and Sophia Sutton, adopted him in 2000 on Easter Sunday. He finished growing up in Plymouth, Minnesota, and graduated from Armstrong High School in 2012. At the time, Oliver was ranked 114th in the world on the Magic: The Gathering online professional circuit.

Oliver is set to graduate from DCTC in May 2018 with a 4.0 GPA and his A.A.S. degree from the Dental Assistant program. Earlier this semester, he was voted “Most Surprising Student” by his fellow students in the program. He described his decision to enter the dental industry as complex yet fully informed.

“Look, it’s not like teeth run in my family,” he said. “My mom isn’t a periodontist and my dad doesn’t work as a floor supervisor at that new Tom’s of Maine toothpaste factory in Wayzata. And I certainly didn’t choose my future career because my adoptive sister, Veronica, is a mouthwash model bonding with the in-crowd in Los Angeles.”

One thing you most want to accomplish in life:
“Sleep with the lights off.”

After taking several moments to reflect, Oliver offered this poignant insight into his occupational destiny with a noticeable hitch in his voice.

“I had one of those cylindrical Quaker Oats containers filled with plastic dinosaurs, you know, when I was stuck at that creepy orphanage. Some bigger kids eventually stole my dinosaurs and I don’t know if I ever got over that setback. I always liked scrubbing those plastic dinosaur teeth with an old toothbrush I found in a Dumpster behind the orphanage. That would be a real job, right? Scraping matrix-stage plaque off the grill of an angry Allosaurus. That’s the kind of challenge I see myself accepting. My instructors keep telling me I have phenomenal chairside skills.”

Oliver studiously avoids extracurricular activities at DCTC, but he does spend a ton of time in Student Life playing foosball with his dental assistant classmates, who not only demolish his fortitude as a goalkeeper, but also nag him incessantly about asking Oceania out on a date. Oliver confessed that he has been mulling over the idea, noting that Oceania really does seem to like him.

“Uh, wait, you don’t think she’ll read this article, do you?” he added worriedly seconds later. “That could get awkward, right?”

When he’s not lounging around, sleeping late and working as a stockroom clerk at the Dollar Tree in Shakopee, Oliver keeps busy reminiscing about his glory days as a pro Magic player. He sold most of his Magic card collection to help pay for his college education. He recently moved into an efficiency apartment at the Owl Ridge Commons in Eden Prairie. Oliver has saved close to $800 toward the purchase of a used car.

“I feel kind of dopey having my mom and Oceania drive me everywhere I go,” he said.

Three words that describe you as a college student:
LAZY. SULLEN. BRILLIANT.

Above the statewide median of $19.62/hour

This career is currently in high demand and is seeing very high growth compared to other careers. Growth rate is 11.7 percent, or well above the statewide average. There will be a need for about 2,000 new Dental Assistants to meet market demand between 2014–2024. This includes the demand due to replacement (workers leaving the occupation or retiring) as well as growth.

To learn more about the Heavy Duty Truck Technology program at DCTC, contact:

To learn more about the Dental Assistant program at DCTC, contact: 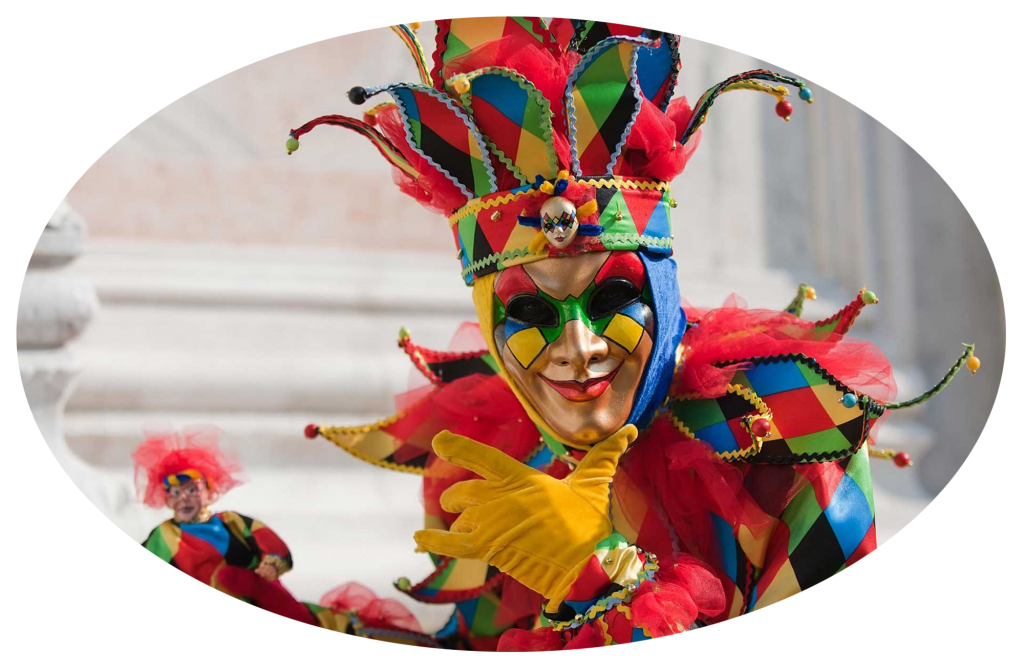 Wait! Give me a good click before you go.

Nikki Abramson inspires others by living a message of hope Nikki Abramson, a student in the Entrepreneurship/Small Business program at Dakota County Technical College,…