Beginning spring 2018, student veterans and military service members graduating with a degree or diploma from Dakota County Technical College will also be awarded a Beyond the Yellow Ribbon Challenge Coin to honor their service and recognize their academic accomplishments. Anna Voight, associate director of student life at the college, reported that challenge coins capture the essence of military affiliation and instill pride in people receiving them.

“DCTC is committed to honoring and supporting student veterans and active-duty military personnel attending our college,” said Anna, who serves as BTYR Committee chair. “We are grateful for the sacrifices they and their families have made in service to our country. Awarding challenge coins is our way of recognizing these students in a way that follows a longstanding tradition of military culture.”

Anna noted that students utilizing military benefits who graduate with a degree or diploma will receive a challenge coin in the mail along with their diploma.

“Challenge coins can also be awarded to civilians for their outstanding support of veterans,” Anna added. “The DCTC Beyond the Yellow Ribbon Committee and Veterans Club will develop a process to award civilians a coin to recognize DCTC faculty and staff as well as community members who go above and beyond to provide exceptional support to the military community.”

A Lasting Tradition Within the Armed Services

Many readers may not even know what a “challenge coin” is, or how they are used within the modern-day military ranks, but their use is highly prevalent in many arenas. Members of the US Armed Forces have a long-standing tradition of carrying such coins that symbolize unit identity and brotherhood. Each piece usually bears unique unit symbols or mottos that identify the group in which they represent, and are often traded, presented, and collected between unit members.

Depending on who you ask, the “challenge coin” has historical roots dating back from fifty to nearly one-hundred years. The most documented and familiar story about these coins comes from an American fighter pilot who was shot down during World War I and forced to land in hostile German territory. The pilot was subsequently captured and temporarily held in a detention facility that was later attacked by British Forces. This attack afforded the American an opportunity to later escape.

Originally published on The Balance. 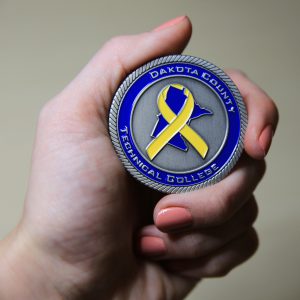 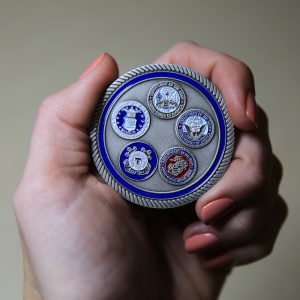 Kathy Bachman serves as MDVA higher education regional coordinator at DCTC—her office is in the Military and Veterans Service Center on campus. Kathy was instrumental in making the challenge coin concept a reality.

“The mission of the BTYR Committee is to support military members,” Kathy said. “A college degree is a great accomplishment as the veteran reintegrates back into civilian society. I suggested to the committee that DCTC recognize them with a challenge coin. I give full credit to the committee members on implementing the award.”

Senior Chief Bruce Kunkel (Ret.), served in the U.S. Navy from November 1992 until June 2017. Today, Bruce is pursuing an Associate of Applied Science (A.A.S.) in the Electrical Construction & Maintenance Technology program at DCTC. He also serves on the college’s Beyond the Yellow Ribbon Committee.

“When given out in a presentation, the challenge coin represents the great satisfaction and pride the awardee takes in his or her accomplishments,” Bruce said. “The challenge coin recognizes the great integrity and selfless devotion service members bring to their work. This coin is a perfect way to show appreciation for the academic achievements of veterans and military service members graduating from the college. We know it’s hard to get back into school after a rigorous tour of duty.”

More about Veterans Services at DCTC…

Dakota County Technical College has shown its commitment to being a veteran-friendly campus by being proclaimed a Beyond The Yellow Ribbon Company in 2010, opening a newly remodeled Military and Veterans Service Center in 2016, and being ranked #7 in the nation in the 2017–2018 school year on the list for Military Times Best: Career & Technical Colleges.

DCTC is dedicated to meeting the needs of student-veterans and active-duty service members. Some veterans face personal, relationship, education and employment challenges. Veteran’s families also may need support while their loved ones serve overseas and when they return home. DCTC, working with the Minnesota Department of Veterans Affairs, provides additional training on supporting veterans to counselors, student affairs staff, faculty, and administrators.

To learn more about BTYR Challenge Coins and Veterans Services at DCTC, contact: 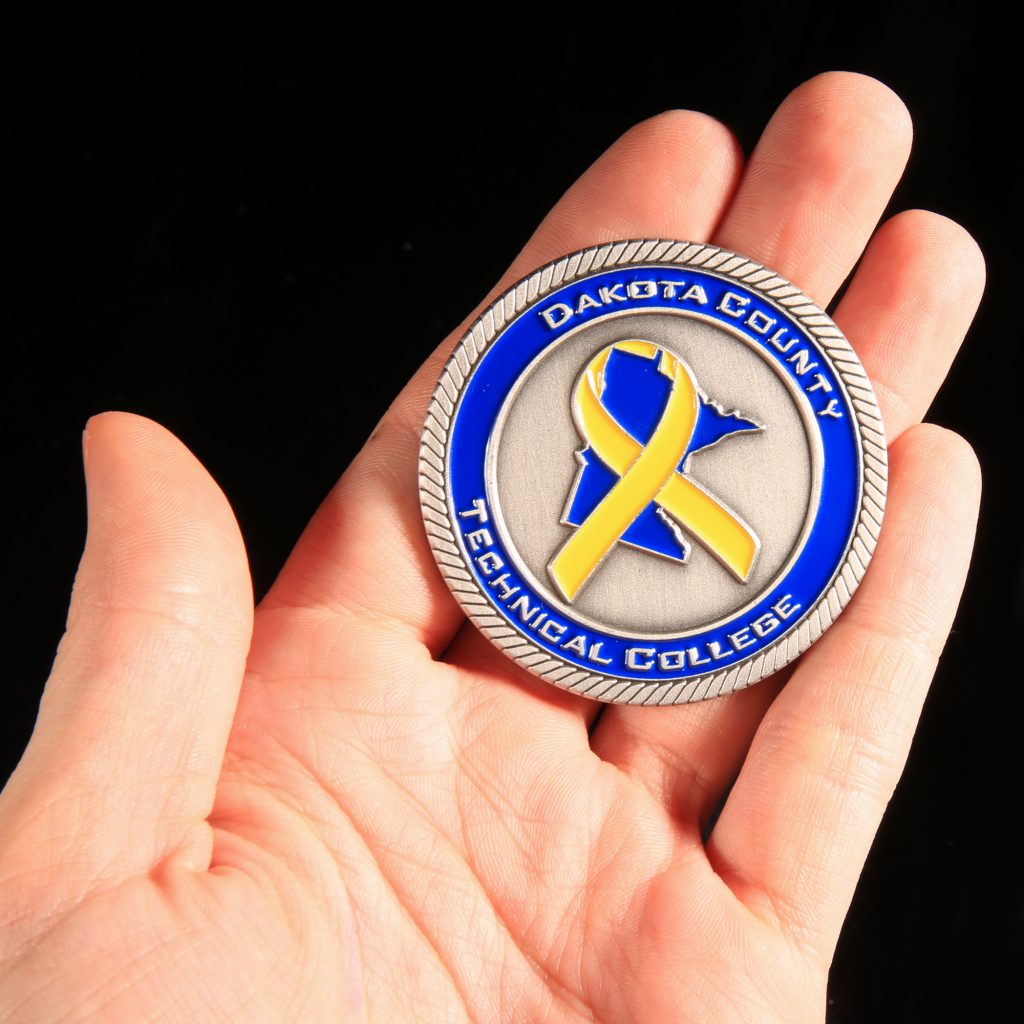