On Wednesday, November 15, 2017, Sheina Marie Hawkins, a Web Design major and student ambassador at Dakota County Technical College, will be the presenter at a seminar called “Free to Be Me.”

Sponsored by the Sexuality and Gender Acceptance Association (SAGA) and the Multicultural Student Leadership Association (MSLA), the event takes place from 11:30 a.m to 12:30 p.m. in Room 1-630 on the college’s main campus in Rosemount, Minnesota.

Sheina Marie will offer an insightful look into what life is like for a transgender woman within the DCTC community by relating her own, real-life experiences.

“My primary goal is to focus awareness on the LGBTQ+ community as a way to educate staff, instructors and most of all students that it’s okay to value yourself for who you are,” Sheina Marie said. “My secondary goal is bringing all of us together in our campus community by stressing that it’s okay because we are all one family on this Earth. I want to express my gratitude for receiving this opportunity to hold this event and bring about positive change.”

WHAT: FREE TO BE ME

Sponsored by SAGA and MSLA

About the presenter, Sheina Marie Hawkins

Sheina Marie Hawkins, 56, was born Patrick Lee Hawkins. At the age of five, Patrick was pestering his mom about something when he happened to notice an article of clothing hanging in a closet.

“Whose dress is that?” he asked.

Patrick’s mom, perhaps a little agitated at that moment, replied, “That’s your dress.”

“I remember how a feeling of calm and peace came over me,” Sheina Marie said.

Sheina Marie grew up in Bloomington, Minnesota, and graduated from Abraham Lincoln High School in 1979. Like her brother and father, she has dyslexia, a reading disability where people have trouble identifying speech sounds and comprehending how those sounds connect with words and letters. She credits her late mother, Phyllis, for helping her overcome the disability.

“My mom did a lot of research on dyslexia,” Sheina Marie said. “She made sure I was mentored by two early experts in the dyslexia field.”

The road to self-discovery and acceptance

After struggling on her own to understand herself for several years, Sheina Marie began seeing a therapist, who diagnosed her with gender identity disorder in 1984. That news was not enough to inspire Sheina to make major changes in her life. For the next two decades, she immersed herself in running her own business, Hawkins Trucking Company, based in Lakeville, Minnesota.

“Everything came down to one night when I was alone with a loaded shotgun,” Sheina Marie said. “I ultimately called an old friend. I asked him to come over and take the shotgun and shells away from me. I knew then I had to do something.”

The next morning, she contacted the same therapist she had first seen more than 20 years earlier. The therapist told Sheina Marie she had one simple choice: She could accept herself and be who she really was or live a short, miserable life.

“I made a decision right there to change my life,” Sheina Marie recalled. “I flew out to see an old friend in Las Vegas. She gave me valuable advice on how to transition from male to female, including information about hormone replacement therapy.”

Three words that describe you as a person:
UNDERSTANDING. COMPASSIONATE. INQUISITIVE.

Sheina Marie eventually sold her trucking business, but making the commitment to transition would open the door to a brutally hostile world.

“I never knew until then how bad life could be,” she said. “I was living in Farmington, Minnesota, at the time. I was an outgoing person and knew a lot of people in town. They were now afraid of me. They saw me as a freak. My closest friends and even my father and siblings disowned me. I was completely on my own and unemployed. Life at that point was pure hell.”

Sheina Marie was let go from her job at a hotel during her transition and finding another job was a nonstarter. She was dead broke and devoid of prospects when she sat down at her computer with the idea to check into going back to college.

Some years earlier, she had earned an associate’s degree in management from Hennepin Technical Institute (now Hennepin Technical College) in Eden Prairie, Minnesota. Her late mom had always supported her and Sheina Marie heard her voice telling her to continue her education.

“I knew I was strong enough to get through anything,” Sheina Marie said. “I knew I would be okay. I’m not done yet, I thought. I decided that evening to become a full-time college student. I told myself my name is Sheina Marie.”

Mark Grant to the rescue

When she enrolled at Dakota County Technical College, Sheina Marie filled out all her paperwork using her birth name. In class, she went by her chosen and now legal name. Mark Grant, her speech communication instructor, noticed the discrepancy.

“I was in mid-transition and unsure of myself,” Sheina Marie reported. “Mark took me aside and said, ‘No, this isn’t right. You need to be who you are.’ He gave me support when nobody else would. That’s when my life truly began—just like flipping a switch. I took responsibility for who I was and vowed that I would do everything I could to make sure no one else would have to go through what I went through.”

Life at DCTC, transfer plans and the future

Sheina Marie is earning an Associate of Applied Science (A.A.S.) degree in Web Design at DCTC and is on track to graduate fall 2019. She’s an active student on campus and serves as a student ambassador and student senator. She belongs to SAGA and serves as MSLA secretary. She also donates her time to OutFront Minnesota, a nonprofit organization with the mission to “create a state where lesbian, gay, bisexual, transgender, and queer people are free to be who they are, love who they love, and live without fear of violence, harassment or discrimination.”

“I take pride in my work as a student ambassador,” Sheina Marie said. “I sign up for all orientation sessions and Tuesday Campus Visits. I also enjoy participating in Student Life activities. I basically go wherever I’m needed.”

Sheina Marie loves technology and wants to continue studying Web design as well as multicultural communication after she graduates from DCTC. She’s set on earning her bachelor’s degree and is open to going on to get her master’s.

“My goal is to become an accomplished public speaker,” she said. “I want to be a spokesperson for LGBTQ+ issues and help companies support diversity in the workplace through their websites. I would also like to do freelance Web design work.”

Sheina Marie likes to roller-skate in her free time. She also enjoys photography, especially photographing nature scenes. She resides in Rosemount with her 11-year-old cat, Lady Asia, a Maine coon she adopted in Buffalo, Minnesota.

When asked what her greatest accomplishment is so far, she had this to say: “Being Sheina Marie Hawkins. I’m glad I went through everything to be where I am today. I know who I am and that knowledge gives me the strength to help others. When a mother calls me looking for help because her son told her he thinks he might be a girl, I know just what to say. I tell her to hang up the phone and go hug her son. Tell him you love him, I say. Tell him you will get through this together.” 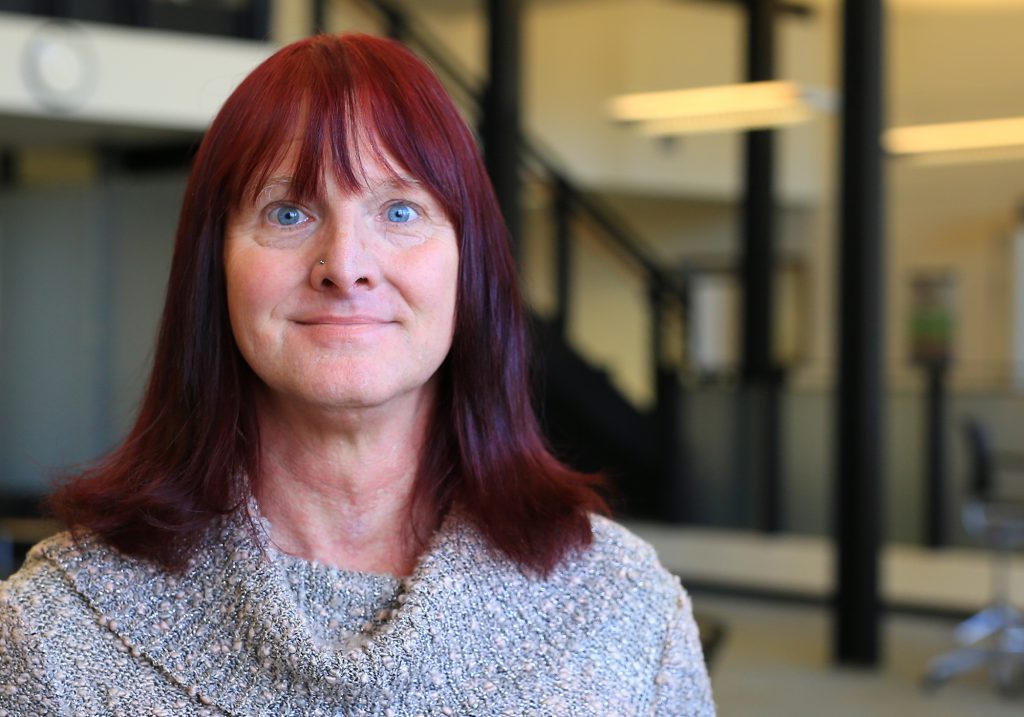 To learn more about the Web Design program at DCTC, contact:

Think and drink responsibly In an effort to raise awareness about alcohol use, DCTC is participating in National Alcohol Screening Week (April 12-16). Visit…