Yoshitatsu Anderson, 22, is working on a plan to own his own business one day as an electrician specializing in home automation. Smart homes with autonomous lighting, thermostats and locks, robotic appliances, indoor and outdoor security systems, integrated entertainment, and remote surveillance and environmental systems control are a boon to electrical contractors. According to MarketsandMarkets, the global smart home market will be worth nearly $140 billion by 2023.

Tatsu is earning his Associate of Applied Science (A.A.S.) in the Electrical Construction & Maintenance Technology program at Dakota County Technical College and is on track to graduate in spring 2019. He likes the program’s curriculum and is familiar with the trade because his dad, who has a Norwegian heritage, is a construction worker. His mom is from Okinawa.

Originally from Osceola, Wisconsin, a small town bordering Minnesota on the St. Croix River about 18 miles southeast of Lindstrom, Tatsu eventually moved with his mom to Burnsville, Minnesota, and graduated from Burnsville High School in 2013.

He has three brothers, Yoshi, 29, who serves in the U.S. Army Reserve, Zen, 26, also in the Army Reserve, and Hideyoshi, 19, who’s studying physical therapy at Bemidji State University. Tatsu just found out Yoshi is going to have a baby and make him an uncle. On weekends, Tatsu works as a nursing assistant at The Rivers, a senior living community in Burnsville.

Install and repair electrical wiring in homes and businesses.

Well above the statewide median of $19.62/hour

This career is currently in very high demand and is seeing very high growth compared to other careers. Growth rate is 10.6 percent, or well above the statewide average. There will be a need for about 2,870 new Electricians to meet market demand between 2014–2024. This includes the demand due to replacement (workers leaving the occupation or retiring) as well as growth.

Tatsu is a drummer in the rock band, Headdy Gravvy. The band plays punk metal, melodic metal and doom metal, the latter “very, very heavy.” Headdy Gravvy recently performed at DCTC during the Party on the Patio. Tatsu noted that the band will be performing Saturday, October 28, 2017, at the Castle Rock Bar & Grill in Northfield, Minnesota.

WHO: Headdy Gravvy and Friends

Headdy Gravvy at the Party on the Patio gallery 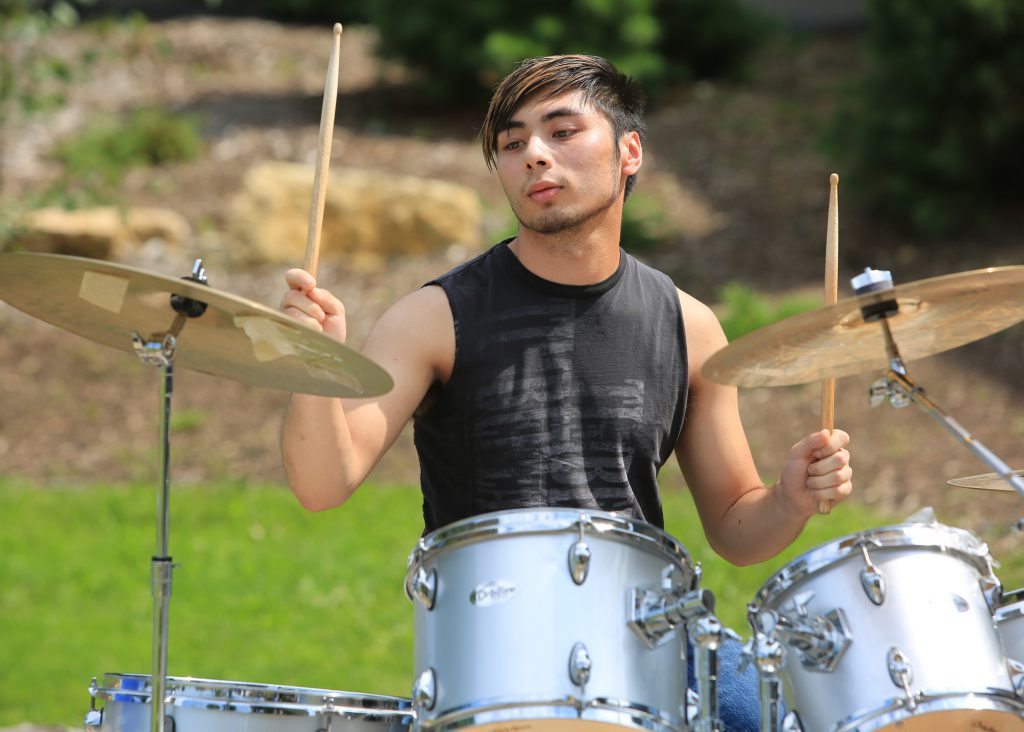 What has been your toughest challenge in life?
Moving to Minnesota when my mom and dad broke up.

What is your greatest accomplishment?
Overcoming family problems and moving on.

What person has influenced you the most in life?
My stepdad, Jeffrey Asplund. He’s a broker and appraiser and owns his own business.

Three words that describe you as a college student:
FOCUSED. DRIVEN. QUIET.

Three words that describe you as a musician:
LAID-BACK. AGGRESSIVE. FUN.

To learn more about the Electrical Construction & Maintenance Technology program at DCTC, contact:

Former UW-EC star knows how to win Jill Millis, the new head fastpitch softball coach at DCTC, has sports in her blood. Her father…