Taylor Quill, 27, a recent graduate of the Brewing & Beer Steward Technology program at Dakota County Technical College, landed his dream job as head brewer at the Lakeville Brewing Co. in Lakeville, Minnesota. Taylor works with state-of-the-science equipment and can control every aspect of the brewing process electronically. His expertise produces a number of popular house brews on tap and in cans, including:

Taylor was 7 years old when he first started working on his grandparents’ farm outside Austin, Minnesota. He was there most weekends and anytime school was out during crop season. In the ninth grade, he moved with his family to acreage near Hampton, Minnesota. That acreage was where he first tinkered with fermentation via grapevines and mashed grapes, not hops and grains.

He played football and wrestled at Farmington High School, graduating in 2008. He briefly considered a career in health care and even earned a Certified Nursing Assistant (CNA) certificate at DCTC (his mom had taken Early Childhood & Youth Development courses at the college).

After deciding the nursing profession wasn’t his true calling, he went on to earn a B.S. in Biology from Winona State University in 2013. His capstone research project centered on studying downy mildew resistance in hops; he grew an entire acre of Centennial hops for the project.

Hops are the flowers (also called seed cones or strobiles) of the hop plant Humulus lupulus. They are used primarily as a flavoring and stability agent in beer to which they impart bitter, zesty or citric flavors; though they are also used for various purposes in other beverages and herbal medicine. 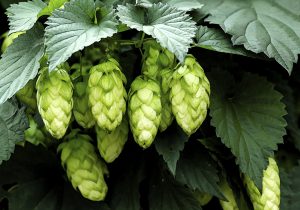 Getting his career brewing…

Taylor’s admiration for beer of all styles and most everything related to brewing and breweries persuaded him to earn a 21-credit certificate in the Brewing & Beer Steward Technology program. He enjoyed the program and learned a lot.

“I liked the camaraderie between our beer groups,” Taylor said. “We would do small batches together and share ideas. The program has excellent brewing equipment.”

His instructor, Jeff Merriman, remembers Taylor as a standout student. “While the program doesn’t specifically train students to immediately step into a head brewing role,” Jeff said, “it’s no surprise to me that Taylor’s hard work and dedication as an assistant brewer led to his promotion as head brewer in the industry.”

Yeast are single-celled microorganisms that reproduce by budding. They are biologically classified as fungi and are responsible for converting fermentable sugars into alcohol and other byproducts. There are literally hundreds of varieties and strains of yeast. 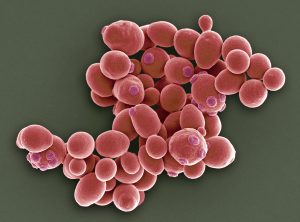 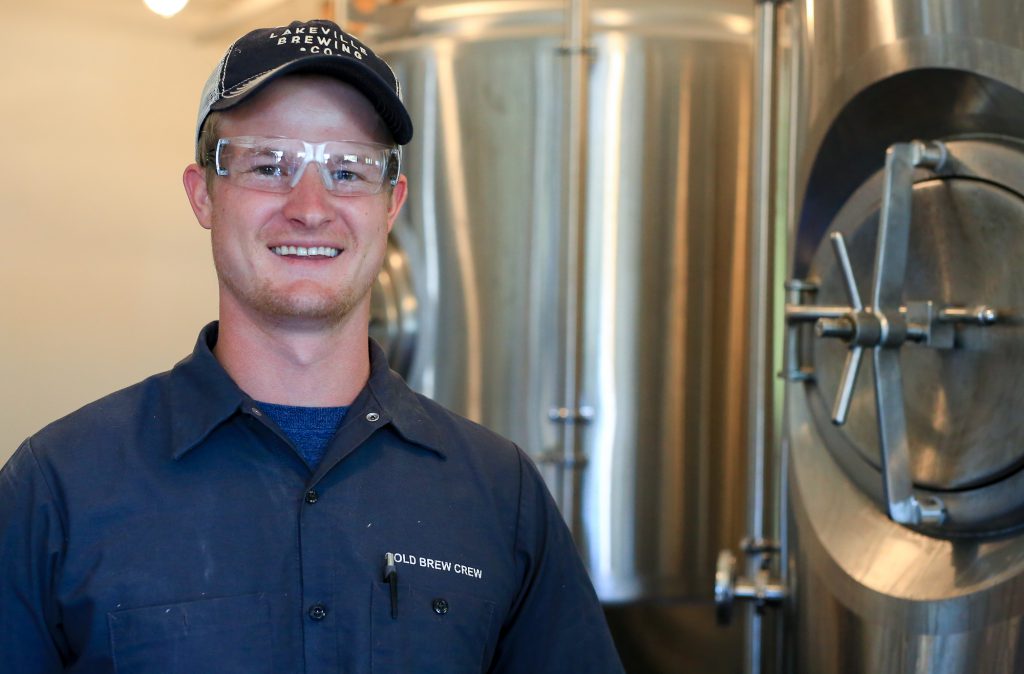 What is the most interesting aspect of brewing science?
Yeast across the board. The yeast you use can completely change the beer you’re making. The health of the yeast and cell density can make or break a beer.

What is the most difficult aspect of brewing science?
Calculating the mash water. That involves adding the grain and a certain amount of water at a certain temperature with no margin for error.

What is the most rewarding aspect of brewing science?
The beer—and hopefully winning awards. I like looking across the bar and seeing people drink the beer I made. I make happiness in a glass.

Three words that describe you as a brewer:
SPORADIC. SCIENTIFIC. INQUISITIVE.

What country makes the best beer and why?
The U.S. is making the best beers out there. Cigar City Brewing in Tampa, Florida, makes a great India pale ale called Jai Alai. Boom Island in Minneapolis is another top brewer. They specialize in classic Belgian-style craft beers.

What’s the best beer you’ve ever tasted?
Cherry Sour Johnny made by Forager Brewery out of Rochester, Minnesota. I tasted it at a beer festival and thought, wow, this is the best beer here. It blew my mind.

More about the program…

The brewing industry demands a wide array of positions. Production is just a small portion of the jobs available. Graduates from the program have not only filled positions as brewers and cellarman, but also packaging line operators, taproom managers, salespeople, regional brewery representatives, delivery drivers and draft technicians.

What would tell someone thinking about following your career path?
Do it, but also get as many feelers out into the industry as you can. Brewing is a very competitive business.

What would tell someone who’s thinking about starting their own brewery?
Don’t just start brewing beer. Do your homework and make sure you have the proper financing.

What’s the one thing every brewer should know?
You’re going to need a thick skin. You will run into a lot of critics and people who don’t like your beer for whatever reason. You need to know how to take criticism.

“I make happiness in a glass.” 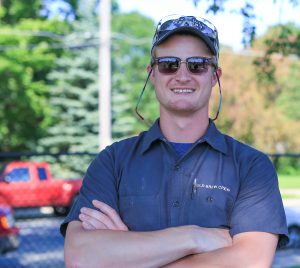 What person or persons has influenced your life the most?
My grandparents, Ron and Elaine. I spent a lot of time on their farm in Austin.

What is your greatest challenge?
Allocating time between brewing and my social life.

What is your greatest achievement so far?
Becoming head brewer at the Lakeville Brewing Co. This is the first job I’ve had where I really want to get up and go to work.

Taylor resides in Farmington, Minnesota. His girlfriend, Laurel, 28, works for the U.S. Social Security Administration. His brother, Anthony, lives and works on the island of Malta in the Mediterranean Sea. Anthony, who works in finance, started a company called By the Barrel, which refurbishes used wine barrels for new purposes, including rain barrels. Taylor took over operations when his brother moved to Malta.

When he’s not growing hops, working as head brewer and spending time with Laurel, Taylor enjoys scuba diving and playing drums. He is also fully restoring a 1976 Glastron Carlson speedboat CV23, the same model featured in the James Bond movie, Moonraker. The speedboat has been stored in a barn for 10 years, but growing up Taylor spent a ton of time in the boat wakeboarding on Lake Byllesby. 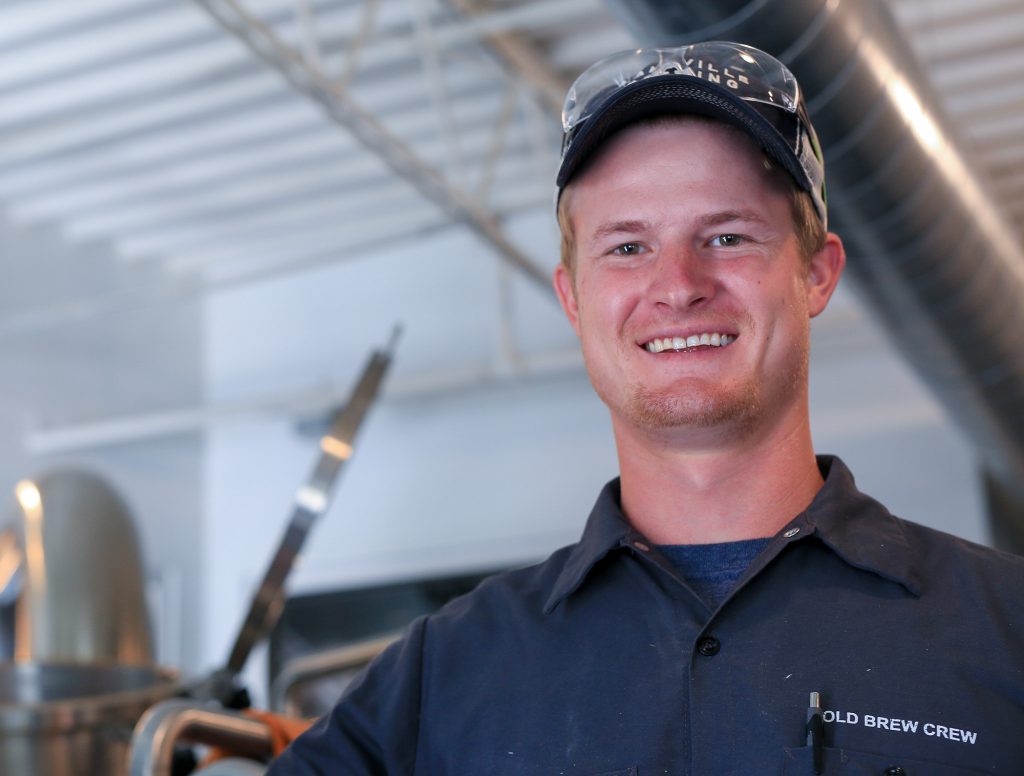