Jake Hartung was 23 years old when first interviewed by DCTC News in May 2008. Jake had recently earned his A.A.S. degree in GM ASEP at Dakota County Technical College and was working as shop manager at SSR Race Cars & Parts in Ellsworth, Wisconsin. He also kept busy driving a 622-hp race car powered by pure methanol at dirt-track speedways across Wisconsin.

Today, Jake is 32 and making great headway in the racing business. He formed a partnership with two friends and Spring Valley Auto Parts (NAPA) and now co-owns SSR, which has a new location in Spring Valley, Wisconsin. He lists his official occupation as chassis builder—and he continues to drive the open wheel modified race cars he designs and builds.

“We run a fabrication shop and provide parts and service for racing clients,” Jake said. “We build around twenty cars a year and ship them all over the country. We also have house cars that our clients race.”

“We used to race only during the racing season [April to early October], but now we run during the winter, too,” Jake said. “We go on tour in the southwest, including Arizona. This winter we’ll be heading for Texas.” 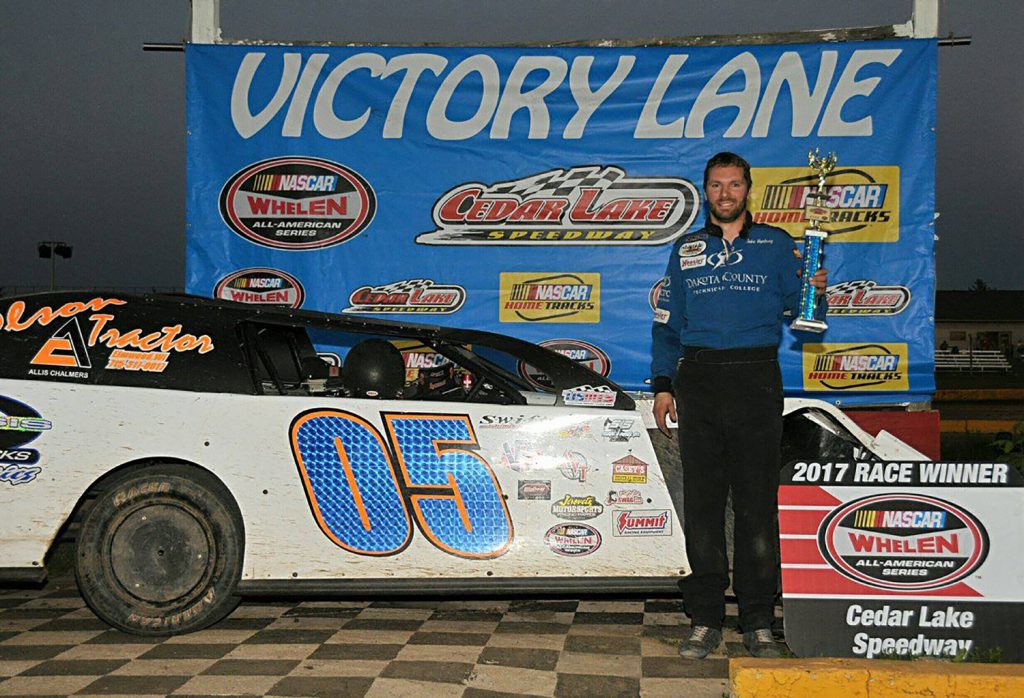 About GM ASEP at DCTC 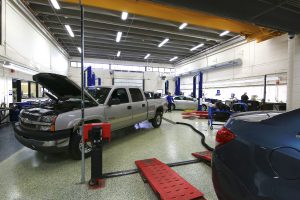 More about Jake and his family

Jake’s wife, Sarah, graduated from the University of Wisconsin–River Falls and teaches kindergarten at Spring Valley Elementary. Sarah and Jake met while attending high school together in Elmwood, Wisconsin, a town with 800 or so residents only seven miles from Spring Valley.

“Jake is amazing with his clients at SSR,” Sarah said. “He’s always on the phone with them talking racing and thinking of ways to build better cars. He still loves driving, but he’s passionate about growing his business.” 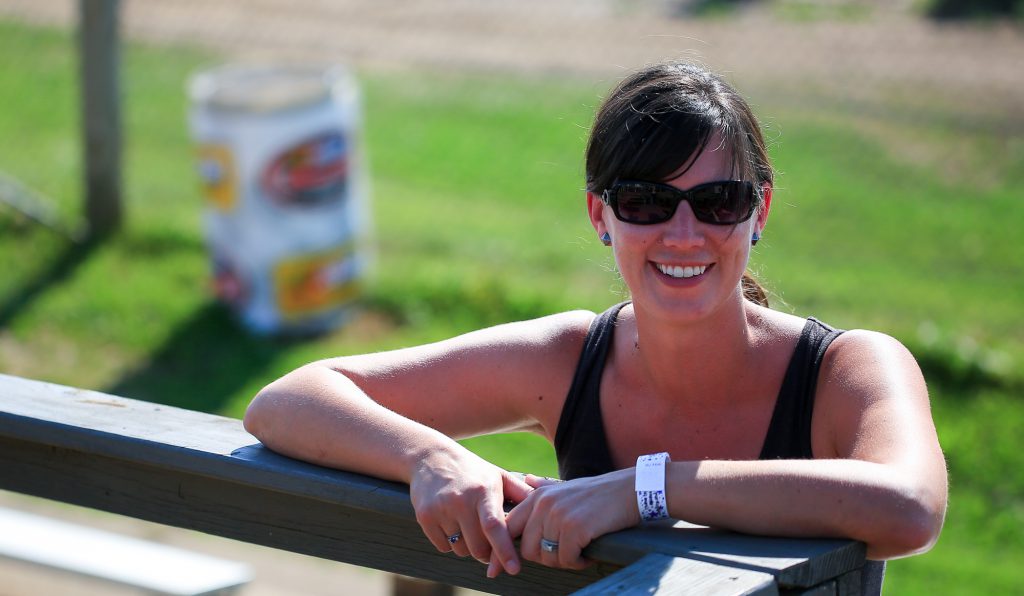 Jake related a story about the one time he took his wife for a ride in a race car. “We were at a speedway and I got the chance to take her around the track in a two-seater,” he said. “I went full out and hugged the wall the whole time. When we were done, she got out of the car and slugged me on the arm. She said she wished I could have been the one next to the wall. We never did that again.”

Jake and Sarah are raising three boys, Lucas, 7, Samuel, 4, and Charlie, 1. Jake lists all three as members of his pit crew. Jake’s father, Bruce Hartung, is a Welding Technology instructor at DCTC. Bruce started teaching at the college in 2012 after more than 24 years in the welding industry. He also has many years of experience designing and fabricating dirt-track race cars.

Rocks are not your friends…

Race cars in the modified division do not have glass windows or windshields. The open-air ride invites rocky projectiles spewed up from tires spinning more than 100 mph. The face shield on Jake’s helmet was once cracked by a stone flying up from the track. Another time, a rock shot through the driver side window, bounced off his helmet and put a sizeable dent in the roof from the inside out. 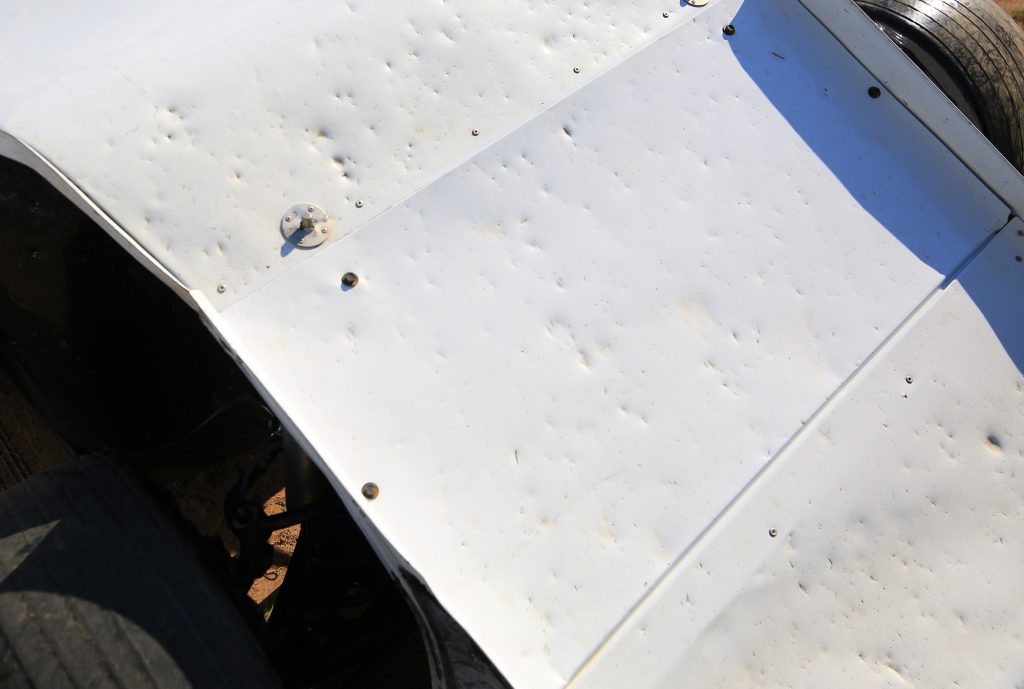 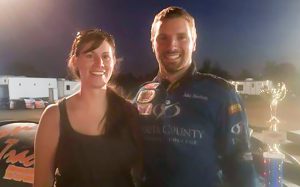 Sarah and Jake with trophy

The late-afternoon temp was 86 degrees Fahrenheit under blue skies for race day at Cedar Lake Speedway near New Richmond, Wisconsin. Cedar Lake is equipped with a dirt-clay oval track that’s three eighths of a mile long, a distance when stretched out straight is 40 yards shy of seven football fields. Spectators take in the hotlaps, heats and features from the grandstand and stands, or while tailgating or enjoying the AC in their RVs.

To learn more about GM ASEP at DCTC, contact: 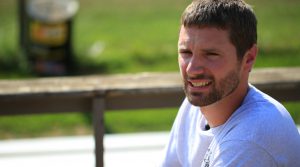