Ann Byre, PharmD, vice president of pharmacy services at Allina Health, serves on the Dakota County Technical College Foundation Board of Directors. Ann was recently honored by the University of Minnesota College of Pharmacy with the 2017 Preceptor of the Year Award. Preceptors are nominated for this award by pharmacy students mentored in the workplace by pharmacy professionals.

Originally from Bloomington, Minnesota, Ann knew in high school she wanted to pursue a career in pharmacy. She attended South Dakota State University in Brookings, earning her B.S. in Pharmaceutical Sciences followed by her Doctor of Pharmacy (PharmD).

“I chose pharmacy because I always liked math and the sciences,” Ann said. “The SDSU College of Pharmacy was way harder than I expected. I believed I was studying a lot as an undergrad, but once I started grad school, it was definitely challenging. When everyone else was going out and having fun, I was back in my room studying.”

Three words that describe you as a person:
GENUINE. POSITIVE. TRUSTWORTHY.

After graduating from SDSU in 2001, Ann started work as a licensed pharmacist for Target Corporation. She soon discovered she had a propensity for leadership and strategic organization. By 2007, she had advanced from pharmacy manager to group manager then area leader and ultimately regional pharmacy leader, the latter position responsible for determining strategy and focus for more than 500 pharmacies in the Target chain, encompassing pharmacy sales topping $1 billion annually. She was awarded a Best Company Ever Award for her contributions to initiatives that saved Target $100 million in a single year.

Ann’s work required visiting the company’s pharmacy locations across 19 states. “I was traveling all the time,” she recalled. All those days away from home were adding up—especially when she and her husband, Cullen, a business major she met at SDSU, were starting a family.

In 2009, Ann began a new job as director of Allina Health Pharmacy. Just over three years later, she was promoted to director of pharmacy services. In 2016, she took on her current role as vice president. Along the way, she won the 2014 Allina Award of Excellence, one of Allina Health’s highest achievements.

“I really enjoy bringing good ideas forward generated by great leaders and telling the story in a meaningful way,” Ann said. “I am passionate about helping advance pharmacy practice to help benefit our patients.”

In her capacity as an Allina Health VP, Ann is responsible for leading system-wide pharmacy initiatives and strategies across the continuum of care within the greater Twin Cities area, including outpatient, inpatient and ambulatory pharmacy areas.

When asked if she has an executive assistant, Ann smiled brightly. “I have one of the best,” she said.

“I first took on the role of preceptor as a pharmacy manager with Target. I had graduated from SDSU only a year earlier and the rules said a preceptor needed to be out of school at least two years. We had a couple U of M students interning at our location, but no one else was interested in becoming a preceptor except me.

“As time went by, I became more involved with mentoring pharmacy students on a leadership track. Now I mentor students and residents year-round on five-week rotations. They shadow me on the job and we help them learn about health system pharmacy and they help us with projects. It’s a great professional learning experience for them and very rewarding for me.”

Role on the Foundation Board

Ann joined the DCTC Foundation Board in 2013. Her original interaction with the college involved exploring the potential for a new Pharmacy Technician program. When asked to consider joining the board, she was immediately intrigued. 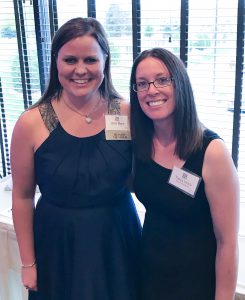 “I liked the idea of supporting higher education,” she said. “I also knew Erin Edlund, the college’s marketing director at the time, because we belonged to the same church.” That connection and a desire to give back by helping students accomplish their academic goals persuaded Ann to give the board a try.

Today, Ann serves as secretary on the DCTC Foundation’s executive board, which meets at least once a month to review fundraising strategies, endowment funds, corporate and community partnerships, and long-range planning to support student scholarships.

“I believe in the college’s mission—Education for Employment,” Ann said, adding that the Foundation meets students where they are, whether they’re new high school graduates just starting their college careers, underrepresented students becoming the first in their families to attend college, or adult learners seeking advancement in the workplace or a whole new career. “The Foundation is there to make sure financial challenges do not prevent them from getting a college education.”

“Ann is a huge supporter of the college and a committed member of the DCTC Foundation Board,” Michelle said. “She is always the first to offer her time and energy to support students and is a generous supporter of the foundation’s efforts to provide scholarships. Between her family and thriving career, Ann has many commitments, but always finds time to volunteer for her community. She is highly successful in her field, and we are very proud to congratulate her on this award.”

More about the DCTC Foundation…

Governed by a board of directors with up to 18 members, the Foundation has generated more than $3.2 million in financial assistance for students while building a general endowment fund and establishing private endowment funds.

The Foundation has also received in-kind donations for equipment, tools, and supplies used in many DCTC programs.

Your contributions—whether as a friend of the college, an alumnus or alumna, or business or company—give students the chance to become self-sufficient by allowing them to further their education and start a career. Every gift and grant makes a world of difference.

To learn more about making a gift to the DCTC Foundation, visit:
Helping Students Make It Happen.

Ann resides in Lakeville, Minnesota, with her husband of 18 years, Cullen, who retired from a successful career in finance to become a stay-at-home dad in support of the family and their two children, a boy, Brady, age 8, and a girl, Vivianna, age 5. The family has a 12-year-old chocolate lab named Bentley (after the British luxury sedan).

In her free time, Ann likes to read; she’s a fan of books on leadership as well as novels handed off from her mom’s book club. One of her favorite pastimes is staying at the family cabin near Willmar, Minnesota, where Bentley, 75 or so in human years, continues to excel at dock-jumping.

What would you tell someone who is thinking about supporting the college?
Donating your time and resources to DCTC is definitely a worthy cause. Our students need financial support and mentoring to succeed in their college careers. Technical education really is education for employment.

What would you tell someone who is thinking about joining the Foundation Board?
We are always looking for new members from companies and industries that hire our graduates. Our board needs to be strategically aligned to support our students and the companies that employ them.

What is your professional philosophy?
Be genuine and help create positive change.

What is your toughest challenge in life?
Balancing family and work. I need to be a good mom, good wife and good leader by being present for one without being distracted by the others.

Your greatest accomplishment?
My family—I hold them most dear.

Your highest goal?
Remain genuine and add value to whatever role I’m in.

What are the attributes of an outstanding pharmacist?
Patient-focused, detail-oriented and driven.

What do you consider the most valuable characteristic of an effective preceptor?
A passion for continuous learning. As a leader in my field, I need to be connected to the newest strategies and curricula in pharmacy. Serving as a preceptor to pharmacy students is one of the best ways to achieve that goal.