The DCTC Foundation has announced the winners of the 2017 Outstanding Alumni, Advocacy, Instructor of the Year and Spirit of DCTC awards. Diane Frandrup, Paul Anderson, Renee LeMieux and the late Jason Schatzlein will be recognized for their dedication to DCTC at the True Blue Gala, April 27, 2017, at Brackett’s Crossing Country Club in Lakeville, Minnesota.

Diane Frandrup is a 1985 graduate of the DCTC Supervisory Management and Accounting programs. Diane has more than 30 years of work experience at the college. Her vast array of expertise includes positions in the Business office, Transportation department, Academic Affairs as well as her current role in the Registration department.

Diane’s strong work ethic and devotion to DCTC run in the family. Her husband, Verne, graduated from the Electrical Lineworker program. Her son, Lee, completed a year of general education courses and played on the Blue Knights baseball team. Her daughter, Kayla, graduated from the Patient Care Technician program, played on the fastpitch softball team, and received the 2014 Outstanding Student Award.

Paul Anderson has worked in the transportation industry for 45 years—38 of those at Ziegler, Inc. Most recently in human resources, Paul serves as the company’s technical recruiter in Bloomington, Minnesota. In this position, he brings the latest technologies to the classroom and personally sources DCTC interns into the Ziegler workforce, giving the students real-world experience while cultivating their professional network and fostering their confidence on the job site. The strong partnership between the college and Ziegler began in 1998.

Since that time, Paul also served on the Minnesota State SkillsUSA Board of Directors, Minnesota State’s Transportation Board of Directors, the DCTC Foundation Board of Directors. He has also served as chairman of the Associated Equipment Distributors Technical Training Committee and as a member of the Minnesota West President’s Advisory Committee. Paul was nominated for the Advocacy Award by Roger Gartner, Heavy Construction Equipment faculty; Roger noted that Paul has “hired too many DCTC interns to count.” Review committee members commented that Paul Anderson, who will be retiring soon, “is extremely personable and regularly on campus.”

Hosted by the DCTC Foundation, this annual event supports student scholarships and honors those who have advanced the college mission.

Instructor of the Year

Renee LeMieux is the DCTC 2017 Instructor of the Year. Recipients of this award are selected based on their celebration of education and their great work. Renee began teaching at Dakota County Technical College in September 2012. Her current course load includes Adult Health Nursing I and II, Maternal and Child Health, and clinicals. She exhibits a lifelong love of learning and teaching, having earned her MSN in Nursing Education in 2013 from Walden University.

Additionally, Renee brings substantial technical skills and insight to the classroom. She has assisted elderly patients at Geriatric Services of Minnesota, worked for a decade as a registered nurse (RN) with Golden Hearts, Inc., and has served as the director of nursing at The Lutheran Home in Belle Plaine, Minnesota. Summarizing what she most enjoys about teaching at DCTC, Renee Lemieux stated, “I love my students’ energy and eagerness to learn. They won’t accept mediocrity from themselves—and this inspires me to always improve my own performance.” Each year, she looks forward to graduation and witnessing her triumphant students crossing the stage. 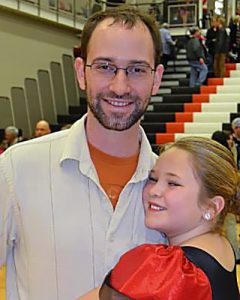 Jason Schatzlein left a tremendously positive impact on the DCTC community. Jason was a native of Lakeville and graduated from Lakeville North High School in 1998. He worked at DCTC eight plus years and during that tenure built strong, lasting connections with staff, faculty and administrators. In recent years, Jason enrolled at Inver Hills Community College, giving serious consideration to a teaching career. He exemplified the typical DCTC student as a 30-something individual, already employed, seeking to further his career while juggling personal, academic and work-related responsibilities.

Unfortunately, Jason was involved in a serious accident while motorcycling in the fall of 2015 and suffered a traumatic brain injury. Despite earnest attempts to fully recover, Jason passed away in late November 2016. His colleagues will always remember him as an extremely outgoing and kind person, a history buff with an admiration for Asian culture, and an avid outdoorsman.

The Spirit of DCTC award is given to individuals with a record of selflessly advancing the college mission and showing boundless support for student success. With Jason in mind, his parents and family members created the Jason Schatzlein Memorial Scholarship, which will support innumerable DCTC students intently pursuing their educational and career goals. We are honored to have Jason’s parents, Gary and Valerie, and stepmother, Sally, attending the True Blue Gala to accept this award on his behalf.

To learn more about the True Blue Gala 2017 and the DCTC Foundation, contact: