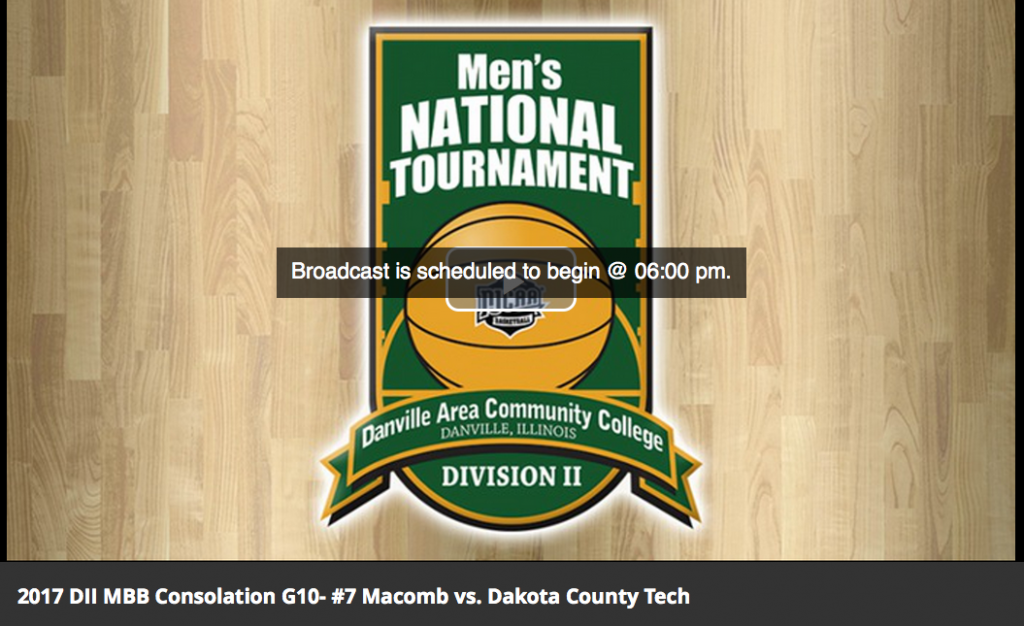 DCTC vs Macomb on NJCAA TV

Danville, Illinois — The third game of the 2017 NJCAA Division II Men’s Basketball Tournament consisted of the 2nd-seeded South Suburban Bulldogs and the Dakota County Technical College Blue Knights.  Both teams had returned to Danville for the second straight season.

South Suburban pushed the pace to begin the game and established an early lead 10–3 after a lob and layup to Rasheide Bell. Quickly the lead expanded to 11 after a 10–0 run by the Bulldogs.

A third lob pass allowed by the Blue Knights had them down 16–3 with under 14 minutes to go in the half. But back-to-back threes by the Blue Knights put them back within seven, 16–9. Shakur Pinder came off the bench for South Suburban to provide a spark. The sophomore had two put-back layups, which ignited an 8–0 run and pumped the Bulldog lead to their largest margin of 15, 24–9.

The Bulldogs continued to pour it on with help from their defense. With 4:12 left, South Suburban had increased their lead to 22, 36–14. DCTC made a push before the end of the half and South Suburban held a 40–23 lead as the team’s headed into the break.

South Suburban’s 17-point lead stayed true early on in the second half, as it fluctuated up and back for the first five minutes. DCTC continued to attack the Bulldogs. Led by Adreon Wadlington and Matt Lillquist, the Blue Knights fed the post and remained within 16 points at the first media timeout with 13:48 to go in the game.

South Suburban’s lead grew to as much as 21 midway through the second half until a corner three by DCTC brought the game to 15, 51–36 with 10:16 left. Neither team could get much going over the next several minutes and with six minutes to go South Suburban was up 55–38.

Wadlington brought the Blue Knights back to within 13 with four minutes left in the game after a strong move and finish. But a quick three and layup by South Suburban expanded the lead back to 18. Too much for DCTC to overcome, South Suburban led wire to wire and won the game 70–48.