Mitchell Kochenash, 24, of Chaska, Minnesota, was elected postsecondary president of SkillsUSA Minnesota at the State Officer Training Workshop in Shakopee, Minnesota, in early January 2017. Mitchell was previously chosen to serve as a SkillsUSA officer at large during the Delegate Assembly Conference at South Central College in November 2016.

SkillsUSA Minnesota officers collaborate to develop engaging educational conferences for the thousands of student members statewide. They visit representatives from business, industry and the state legislature, communicating the message of career-readiness.

A 2010 graduate of Chaska High School, Mitchell is earning his Associate of Applied Science (A.A.S.) degree in Electrical Construction and Maintenance Technology at Dakota County Technical College. He is on schedule to graduate from DCTC in May 2018. He previously attended the University of Minnesota, earning a Bachelor of Arts (B.A.) in Political Science in 2014. 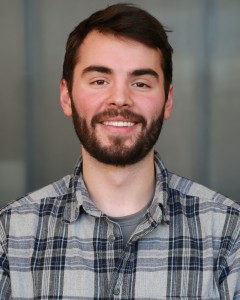 “My goal was to go on to become politically active on the local level,” Mitchell said. “I interned at the State Capitol with Senator Richard Cohen. I learned a lot during the internship and earning my bachelor’s degree, but I soon found out that finding a job would be difficult.”

Mitchell chose his new career path as a licensed journeyman electrician after conferring with an electrician friend of his father. He chose the ECMT program at DCTC due to program’s history and longevity as well as the experienced instructors. He was also able to transfer his credits from the U of M.

He became interested in SkillsUSA through the encouragement of his ECMT instructor, Ron Gruenes, and the college’s SkillsUSA chapter faculty advisor, Kathleen Tettam, an instructor in the Medical Assistant and Patient Care Technician programs.

Kathleen reported that serving as the SkillsUSA faculty advisor at DCTC has been an honor. “It’s allowed me to meet and work with some pretty amazing students and faculty—Mitchell being one of those students,” she said. “He has brought our SkillsUSA chapter into the leadership category by being elected as the SkillUSA state president. We are very proud of him! I have truly enjoyed working with Mitchell throughout this leadership process. He’s worked really hard to get where he is and we’ve had a lot of fun along the way.”

“It’s hard to put into words how blessed I am to work with such great students and faculty. I have enjoyed every minute of being the DCTC SkillsUSA advisor the last year and look forward to many more years.

“The hard work and professionalism that all our students display is inspiring. It’ll be exciting to see them in action at the 50th SkillsUSA Minnesota State Competition at the end of March.”

Scott Determan, DCTC dean of transportation, industry and IT, is a strong proponent of SkillsUSA. Scott serves on the SkillsUSA Board of Directors and has been active at several SkillsUSA conferences and competitions.

“Mitchell is the right person to be leading the Minnesota Chapter of SkillsUSA during its 50th year celebration,” Scott said. “It’s really exciting to have that representation coming from DCTC. SkillsUSA is a great experience for DCTC students because the competitions give them real-world experience and the chance to show what they can to do for our industry partners.”

What do you like best about the ECMT program?
The instructors; classroom/instruction allows for a very inclusive, hands-on approach at learning course materials.

Why did you choose electrician as your career path?
Career stability as well as the opportunity to not bring your work home with you. There is currently an incredible need for skilled trades workers and the skills gap is only growing.

Three words that describe you as a college student:
MOTIVATED. INQUISITIVE. COMPASSIONATE.

What are your duties as postsecondary student president of SkillsUSA Minnesota?
Represent SkillsUSA in a positive manner. Help Miss Jen (State Executive Director Jen Polz) in any way possible. Be an advocate for skilled trades.

What do you like best about SkillsUSA?
Opportunity to constantly get out of my comfort zone.

What would tell someone who’s thinking about getting involved in SkillsUSA?
Do it.

Skill contests will be held across the Twin Cities metro area

Mitchell will be giving a job skills demonstration at the upcoming 50th Annual Minnesota SkillsUSA Championships Conference. His career goals are centered on working in the field as a licensed journeyman electrician. His hope is to perform solar relief work in places devastated by natural disasters.

“I would like to work as an electrician in the area of photovoltaics,” he said. “Everything is stationary in solar. There are no moving parts.”

While going to school, Mitchell works at Tommy’s Malt Shop in Chaska. When he’s not studying, he enjoys reading, hanging out with friends and playing beer-league softball. He played varsity soccer in high school and is intrigued by the idea of trying out for the Blue Knights in fall 2017. His family includes his parents, Richard and Susan Kochenash of Chaska, and his sister, Chelsea, and her husband, Mitchell.