There’s some new artwork on the wall of the Dakota County Technical College Military and Veterans Service Center. A quilt dedicated to the Veterans, Gold and Blue Star Mothers of DCTC now adorns the wall.

The quilt was presented to DCTC Coordinator Katherine Bachman and Counselor Jennifer Robinson-West during the Remembering Their Sacrifices program which honored World War II, Korean, Vietnam and Post 9/11 veterans. The event was held Dec. 7 at the Dakota County Library-Pleasant Hill branch in Hastings.

Joan Christenson, a Hastings resident and spouse of a Vietnam Veteran, sewed the quilt in honor of service members, veterans and their families.  The various elements of the quilt have different meaning. Two gold stars and a USA banner honor Gold Star Mothers. Gold Star Mothers have lost a son or daughter in the service of the United States of America or its allies. Additionally, a large blue star at the center of the quilt honors Blue Star Mothers. Blue Star Mothers include mothers or stepmothers (since the child was the age of 13) who have a son or daughter serving or has been honorably discharged  from the Armed Forces of the United States including the Army, Navy, Marine Corps, Air Force, Coast Guard, National Guard, Reserve units and the Merchant Marines. Christenson said the whole quilt is a thank you for Veterans. 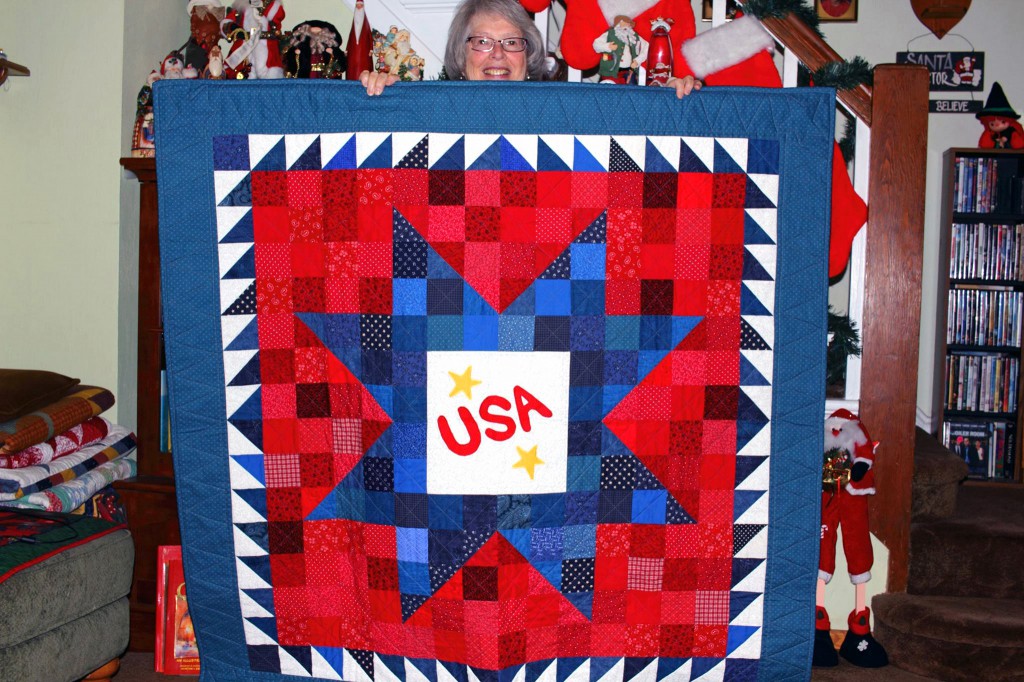 Joan Christenson created this quilt for the DCTC Military and Veteran Service Center.

Bachman said DCTC was acknowledged for its ongoing commitment to serving veterans and current military. Most notably, DCTC was recognized for its recent efforts to establish its Military and Veteran Services Center.

The Military and Veterans Service Center on campus provides support services and program information to U.S. military veterans just returning from active duty or retired from the armed forces for a number of years. The center also puts veterans in contact with other veterans on campus.

The Center is located in Room 2-303 on the Rosemount Campus. The center is staffed by VA work-study students who, along with Bachman, are committed to helping veterans reach their higher education goals. There are more than 200 veterans on campus.

Beyond the Yellow Ribbon CampusDCTCDCTC Military and Veteran Service Centerveterans