Ayub, who has served on the MCDA Board of Trustees since 2014, helped accept the award on behalf of the MDCA.

“We are very honored to be recognized in contributing to the professional development of our peers and working towards innovation and sustainability as a well-regarded career development NCDA division,” said Ayub of the accomplishment. 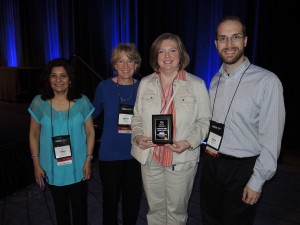 The MCDA is a professional association that serves Career Development practitioners across Minnesota.  An active and engaged chapter, MCDA was honored for its commitment to providing professional growth as well as community and serve as a voice to influence and advocate for the field of career development.

The MCDA has worked diligently the last year to meet its mission through a variety of initiatives. Some of its achievements include fostering a mentorship program for 11 pairs of career development professionals; hosting roundtable events; received NCDA speaker grant for two well-respected local speakers; co-created a career development memorial scholarship in honor of past MCDA president Irene Rossman; implemented a strategic planning initiative to set the organization’s long term course; conducted in-depth membership data audit; secured a new bank relationship for better financial support; and Ayub played a key role in the Communications Committee’s redesign of a new brochure and co-editing a revitalized bi-monthly newsletter.

MCDA President Vic Massaglia, of the University of Minnesota, School of Public Health’s Career and Professional Development Center, said many people came together to make the award happen. “We have an amazing board with folks who truly desire to make a difference through MCDA.”

A number of MCDA members are also very involved with this national organization. Paul Timmins of the University of Minnesota, College of Liberal Arts’ career services is an upcoming NCDA president in 2017-2018.  Ayub has also had a volunteer role since 2015 as a column Editor with the NCDA’s quarterly print magazine which is distributed to a membership of 5,000 worldwide.

Debuted spring semester 2010 In collaboration with Children’s Hospitals and Clinics of Minnesota, the DCTC Child Development program has developed a new Child Life…