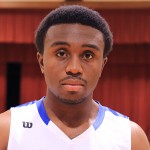 Coach Ben Davis said, “Noble was the 1st player I’ve coached in my 3 years at DCTC that played in and started all 32 games. We asked Noble to do a lot for our team this season and he stepped up to the challenge. Noble does a lot of things really well on the basketball court but his best attribute is his ability to rebound as he finished 12th in the nation in rebounding which is extremely rare for a point guard.”

The recently announced honors join the list Noble has achieved including NJCAA Division 2 National Player of the Week, All-Region Team (an honor he shares with teammate Keenen Bellaphant) and Region 13 MVP. At the end of April, Fahnbulleh and coach Ben Davis will travel to Las Vegas to participate in the NJCAA National All-Star game.

Noble, who attended Hopkins High School, is a second year student and is on track to graduate with a degree in Individualized Studies. Davis said Fahnbulleh thrives in the classroom as well and will be a candidate as Academic All-American as well.

“Noble is an extremely focused & hard working young man that deserves all the success and attention that he has received. Noble has overcome a number of injuries in high school and his first year at DCTC and it was great to see what he is capable of doing when healthy for an entire season. I’ve known Noble since he was 16 years old and it’s been a pleasure to see him develop on & off the court over the years. He’s been a huge part of our success the past two years and we will really miss Noble along with the rest of this sophomore class,” said Davis.