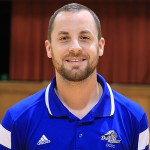 By winning the District Championship, the Blue Knights clinched their first NJCAA National Tournament bid. The Blue Knights are among 16 district champions who will advance to the tournament. The tournament will be played March 15-19, 2016 in Danville, Illinois.

Davis said the team really started to gel in the past month and improved quickly because of it. In particular, Davis said their defense came alive, which was evident in their victory over Dakota Bottineau to win the NJCAA Region 13 Championship.

“We held Bottineau to 36 points in the 1st half to take a big halftime lead,” said Davis.

Focused on the task ahead, Davis said the team will spend the next two weeks preparing for the national tournament.

“We are happy with the win but know we are capable of winning this next tournament as well,” said Davis.

To view more pictures from the game click here.