Born with one-arm, Parker Hanson has accomplished most of his baseball dreams through hard work and dedication

Parker Hanson started playing baseball at the age of 2. His mother introduced him to the game and it’s been a passion ever since. A Blue Knight, Hanson is living out a dream to play collegiate baseball and he hopes his time here leads to the realization of an even bigger dream.

“It’s been my goal since fourth grade to play Division I baseball,” said Hanson. 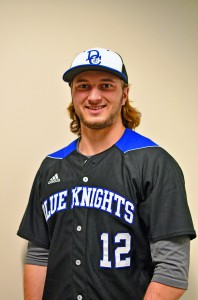 Several schools are recruiting the right hand ace and he’s working hard on the field and in the classroom to be ready.

While many share Parker’s dream to play baseball at a high level, he has had to overcome some unique challenges to get to this level. Parker was born without a left hand and has adapted to learn to play baseball despite the congenital disability.

“It’s easier to adapt when you’ve never had the limb, so I guess in that way I’m lucky,” said Parker.

He uses a prosthetic for hitting. The piece attaches to the bat and pulls off his arm after a hit. When he pitches, Parker holds his glove in his left arm and then puts it on after he has released the ball.

“Honestly, there’s no excuses. I just figure something out,” said Parker.

That attitude has served him well on and off the field through the years. In the eighth grade, Parker dressed for varsity baseball and was named to the First Team All-Conference team as a sophomore, throwing a no hitter in his first appearance of the season.

During his senior year, Parker was contacted by DCTC coach Trent Seaman to play for the Blue Knights.  Seaman said he saw Parker at several showcases last year and was impressed with his athleticism and drive.

“He competed as if he had two arms and was the best ball player out there. He’s a great athlete and a tremendous students,” said Seaman.

In the fall, Parker pitched and played first base for the Blue Knights. Seaman said Parker performed well and he has high hopes for the spring season. The Blue Knights will travel to Arizona in early March to get games in and then start their season March 24.

“You couldn’t ask for a better kid,” said Seaman of Parker. 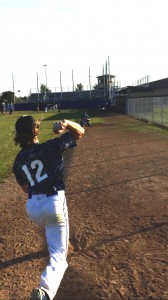