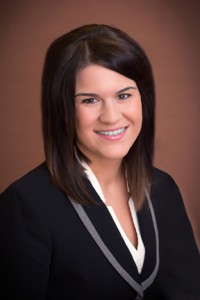 Michelle’s first days on the job have been a whirlwind of meeting people and getting up to speed. Her first task will be planning the foundation’s annual fundraising event, this year called the True ‘Brew’ Gala.

Coming at it with fresh ideas, Michelle said she hopes this year’s True Brew Gala will be the best yet. This year’s gala will highlight DCTC’s new Brewing and Beer Steward Technology program and the event will feature locally sourced craft beers.

Long term, Michelle said she hopes to increase the foundation’s success and the overall visibility of DCTC with new donors and community partners. She’ll start that process by getting to know as many people here on campus as she can. While she will do her best to get out on campus, she also encourages people to stop by her office to introduce themselves.

“I’m excited to meet everyone here and it’s important to me to get to know people,” said Michelle. 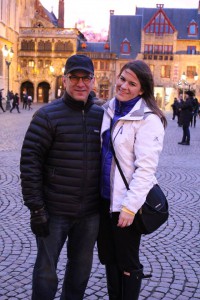 Michelle with her dad Phil Davis in Bruges, Belgium.

Since she was young, Michelle wanted to be a lawyer so that she could be an advocate for others. Her dreams came true when she graduated from William Mitchell College of Law in 2013.

She followed a typical career track, first clerking for a judge in Hennepin County District Court and then became an associate attorney at a large Minneapolis firm. While her dreams of being a lawyer had been realized, Michelle said her desire to help people had not.

“I realized I need public service in my work,” said Michelle. Growing up, she watched her father, a local two-year college president, work tirelessly on behalf of students, and she saw first-hand the amazing opportunities created by technical colleges.

So, when the opportunity for the Dakota County Technical College Foundation Director position became available, she decided it would be a good fit.

The DCTC Foundation provides scholarships and helps more than 400 students a year. As director Michelle will lead fundraising efforts for the foundation as well as advocate for students and DCTC by engaging community partners.

“I really believe in DCTC’s mission and I hope to provide opportunities for students,” said Michelle.

Favorite day of the week: Thursday

Person she would most like to meet: Michelle Obama  Avoid: Her law school contracts professor

Favorite books: Lean In by Sheryl Sandberg and Bossypants by Tina Fey

This year’s True Blue Gala/DCTC Foundation fundraiser was held on Thursday, April 23 at Brackett’s Crossing in Lakeville with record breaking attendance of 232 people.  Attendees has an opportunity…