With the completion of its new brew lab, the Brewing and Beer Steward Technology program will equip students to work in the beer industry

When Dakota County Technical College announced the addition of its Brewing and Beer Steward Technology program, the response was overwhelming.

“We’ve started a lot of new programs at this campus and nothing compares to this. We were on a wait list after the first week,” said Mike Opp, DCTC Vice President of Academic and Student Affairs.

A growing industry, Opp said DCTC aims to fulfill the Minnesota beer industry need for a skilled workforce. The DCTC program is the only formal academic brewing program in the state.

Some early challenges pushed the program start date back a few weeks but the first two cohorts started their education in October.  During the fall semester the 58 students concentrated on the academic parts of their education, while construction progressed on the brew lab.

The Beer Steward program provides students with a basic understanding of brewing science, engineering, management and service. The five-course program takes 32 weeks to complete and includes a 128-hour internship.

Committed to the program, Opp said DCTC invested $500,000 into equipment and facility upgrades for the lab, which features restaurant grade equipment and industry relevant technology.

Each brewing station produces five to ten gallon batches. Merriman said while they are smaller systems, many breweries use those specific systems in test labs to create pilot batches of new beers.

As part of their education, Merriman said students will have the opportunity to brew a variety of beers and develop their skills. Additionally, students will learn what not to do.

“You learn a lot from drinking bad beer. I tell my students if they hear of a bad beer to go out get it and try to figure out what’s wrong with it,” said Merriman. 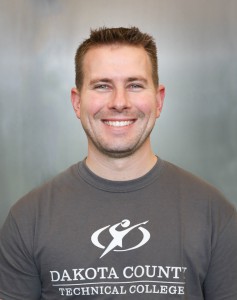 Brewing Instructor Jeff Merriman has a diploma in Brewing Science and Engineering from the American Brewers Guild in Middlebury, Vermont. Jeff is also a Certified Cicerone®, the beer equivalent of a wine Sommelier.

Merriman said they will play with recipes and cooking formulas in the lab to learn what works and what doesn’t.

“I’m going to intentionally do some weird things,” said Merriman.

Learning those lessons in an educational setting will hopefully save money and beer when students go on to work in a brewery setting, said Merriman.

“We’ll be dumping a lot of beer. Hopefully though, dumping beer here will lead to less dumping in the industry,” said Merriman.

Industrywide, there is a lack of trained personnel meaning many breweries work with skeleton crews. Merriman said DCTC wants to create a trained workforce that will ensure that a quality craft beer industry can thrive in Minnesota.

“We want to give students a leg up to work in the industry,” said Merriman.

When creating the curriculum, Merriman said brewers and brewery owners provided feedback on what skills and knowledge they look for in prospective employees. Merriman, who also works full-time as the Regional Retail Manager for Northern Brewer, will continue to work with the industry to address workforce needs.

“Craft beer is cool and people are drinking it. We want to make sure there are people out there making quality beer,” said Merriman.