Lindsay Florey, 20, of South Minneapolis, is pursuing an A.S. degree in Individualized Studies at Dakota County Technical College while playing two NJCAA sports, soccer and fastpitch softball. The 5’9, 140-pound sophomore plays sweeper on the women’s soccer team, which is having an outstanding season with a record of 13–2–1 as of Oct. 28. Lindsay plays outfield on the Blue Knights softball team.

“I originally came to DCTC on a $1,500 softball scholarship,” said Lindsay, who captained her soccer team at DeLaSalle High School her senior year. The Islanders set a school record for wins that season. Lindsay also played basketball and softball for the Islanders. Mark Obarski, the head coach of women’s soccer at DCTC, asked her if she wanted to play soccer for the Blue Knights. She jumped at the chance and received a $1,000 scholarship. 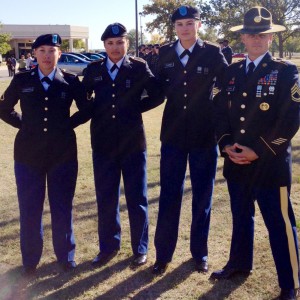 Right after graduating from DeLaSalle in 2013, Lindsay signed a six-year contract with the Minnesota National Guard. She’s a PFC, or E3, with three years to go in the Guard. She loves being a soldier and is tremendously proud of her decision to serve her country.

“A lot of people told me not to enlist,” Lindsay recalled. “They said boot camp would be harder than I could imagine and I wasn’t tough enough to make it through. That strengthened my desire to join up. I’m so glad I did. I wouldn’t take that decision back for the world because it helped me become the person I am today.”

Lindsay doesn’t see herself staying in the military. Her career plans are centered on earning her master’s degree in psychology and going on to become a psychiatrist or therapist. “I would like to work with at-risk children and youth, or children who have been through traumatic experiences,” she said. “I want to be able to help them cope with their trauma so they can live their lives to the fullest.”

DCTC fastpitch softball competes in NJCAA DII. The Blue Knights had 21-win seasons in 2013 and 2014. The upcoming season begins in early March 2016. 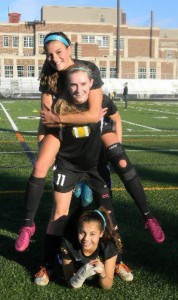 A. I really enjoy the athletic programs at DCTC and the friends I’ve made by being part of those programs. By playing both softball and soccer, I have been able to travel to many different states with teammates who are like family to me. The coaches are supportive and motivated for both programs and I am lucky enough to be able to continue my athletic career in two sports I love.

A. I like how soccer is an individual competition, but also a team competition as well. There are so many times when you are one vs. one with an opponent on the field, and I like that challenge. Also, though, you have the competition between teams and you have to work together as a whole unit with your teammates to be successful and a winning team. I believe that’s what our team does best, we work together as a whole; we understand how one another plays.

Q. What’s your view on the current soccer season?

A. Lindsay borrows a quote from Mia Hamm: “I am a member of a team, and I rely on the team. I defer to it and sacrifice for it, because the team, not the individual, is the ultimate champion.”

Q. Where would you go if you could go anywhere in the world?

A. This is an extremely difficulty question. I would say Thailand, but in November. The reason being is they have a floating lantern festival every November and I think it would be incredible to experience that firsthand. 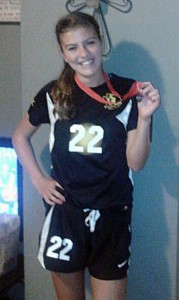 Lindsay with district second-place medal as a DeLaSalle Islander

Q. Who would you like to meet if you could meet anyone in the world?

A. I would like to meet Kevin Hart. I’m a little obsessed with him and, in my opinion, he’s one of the funniest people ever. I love laughing so meeting him would be an awesome experience.

Q. What has been your toughest challenge in life?

A. Being away from home for seven months when I was gone for training in the National Guard. My family and I are incredibly close. Being away from them and out of touch with everything going on at home was a huge eye-opener and really made me realize how much I took the good things, the little things, in my life for granted.

Q. What was your happiest moment in life so far?

A. I have an extremely happy life so that’s also a very difficult question. I have an infinite amount of little happy moments, but my happiest would probably be when my sisters were born. I have two younger sister, Hannah, 18, who’s a dancer, and Isabelle, 15, who’s a great basketball player. I take immense pride in being an older sister and I believe I have become a better person over the 18 years of being a role model and someone my sisters can look up to.

A. A House in the Sky by Amanda Lindhout 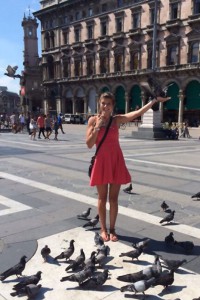 Lindsay in Milan, Italy, making friends with a local pigeon

Q. What do you like to do in your free time?

A.  I really enjoy reading, mostly biographies or autobiographies about people who have traveled, including their experiences or what they went through. I also like being outside, whether it’s playing a sport, hunting, fishing, four-wheeling, tubing, whatever. My family has a cabin at a family-owned resort on Cass Lake, so we are there all the time in the summer doing things like that.

Q. If you could have any job in the world, what would it be?

A. I would like to be a photographer/journalist for National Geographic. I’d love to be able to travel the world and experience things firsthand for a living. To be able to take pictures of breathtaking sights and write about the cultures of different countries would honestly be living the dream for me.