Railroad Conductor Program is only one of its kind in Minnesota

Shauna Flora, of Burnsville, was tired of working low paying jobs.  She needed experience and she needed training.  She needed a career.

Flora’s friends mentioned DCTC to her.  “It’s so close to home,” they told her. “Check it out.” And, so she did her research and found that DCTC did, indeed, offer her a career opportunity she could really get excited about—the Railroad Conductor Technology program.  Although the major benefit of the job was the salary, Flora was also glad to see that the program was very short term, seven weeks of schooling could get her into the job market. 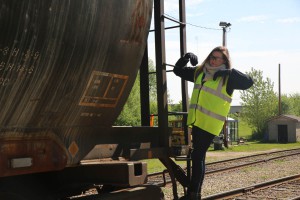 As a non-traditional student Flora was reluctant at first.  “I’ve never been a book girl,” she stated, “But the time went by so fast—it just all clicked for me.”

And, click it did.  Flora’s first hands-on assignment was out on the schools rail road tracks, designed specifically for the students.  She had to change the area where the rain cars connect, called the “knuckle”. “It’s great to be able to have the hands-on classroom experiences,” states Flora.  “This program is just my cup of tea.  You have a lot of autonomy and allows you to be you.”

“I have never been a train nut, but there were lots of students in the class that were,” Flora said.  “We all just learned together.”

She also noted that only about 5% of the industry are women.  She would like to encourage other women to consider this career.  “It’s needed,” she said.  “Not only that, but it’s challenging and rewarding. That’s very cool!”

DCTC’s Railroad Conductor Technology Program is the only one of its kind in Minnesota and one of only four in the nation.  Graduates of the program earn a certificate in only 15 weeks that includes classroom training and outdoor hands-on lab training on the railroad tracks located behind the DCTC campus. 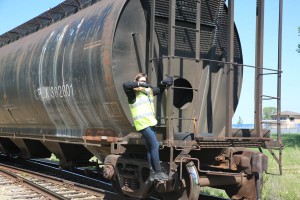 With approximately 22% of the industry’s workforce eligible for retirement with the next five years, railroads are dedicated to recruiting skilled employees who are committed to a career in railroading.  The program has its own advisory committee composed of industry professionals who are instrumental in ensuring graduates obtain the skills necessary for entry level conductor positions.   Potential job titles include train conductor, locomotive engineer, train dispatcher and trainmaster with an average wage of about $26.00/hour.