According to the Bureau of Labor Statistics, women made up only 1.5 percent of the workforce in the automotive body and related repairers field in 2013. Bump that up to 1.8 percent for automotive service technicians and mechanics. Elise Groenewold, 22, a 2014 graduate of the Auto Body Collision Technology program at Dakota County Technical College, wasn’t thinking about those percentages when she made her career choice. Elise had just graduated from North Hennepin Community College with an Associate in Fine Arts degree. She loved art, but understood the challenges of finding a good-paying job in the art world right out of college.

“Art has always been a passion of mine,” said Elise, who noted that she initially pursued graphic design, but switched to the A.F.A. due her aptitude for drawing and painting by hand. She felt that earning a degree in Auto Body Collision Technology would provide opportunities to harness her artistic side while making good money in a robust occupational field.

“I come from a do-it-yourself family,” she added, “and I’ve loved cars ever since I was a little girl.”

“Job opportunities are projected to be very good for jobseekers with industry certification and formal training in automotive body repair and refinishing and in collision repair. Those without any training or experience will face strong competition for jobs.”

A native of Northfield, Minnesota, and a 2010 graduate of Northfield High School, Elise was nervous about entering a program she knew would be populated by nearly all male students—not to mention breaking into a career field with very few female technicians. She was happily surprised to find that she was one of three women in her class. She also had the advantage that her boyfriend, David Hagfors, a graduate of the DCTC Automotive Technician program and a certified welding inspector, could offer her technical guidance based on his own work experience.

Elise showed that she was an adept learner, not only excelling in the ABCT labs, but also on a national stage. One of 10 students representing DCTC at the 50th Annual SkillsUSA National Championships June 23–27, 2014, in Kansas City, Missouri, she won a bronze medal in one of the most competitive events at the championships, Collision Repair Technology. Elise was the first woman to ever break the top three in that event.

“Before the SkillsUSA Nationals, I brought home practice welds—and David showed me what was good and bad,” Elise recalled. “We worked together, welding in our garage. It was a blast.”

During her time at DCTC, Elise continued holding down a job. As a freshman, she worked at Forget-Me-Not, a florist in Northfield; as a sophomore, she worked at Northfield Autobody, the business where she also completed her two-month ABCT internship. She currently works at 3M in St. Paul under contract with Volt Workforce Solutions.

“I work in the Technical Services department at 3M,” said Elise, who landed the job while still a student at DCTC. “I’m lucky that I get to work with the people who are all-knowing about 3M products.” 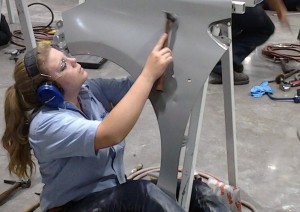 Elise is flexible about her long-range career plans. She enjoys working with engineers at 3M and is considering going into automotive design. “I thought I would like painting the most in auto body,” she said, “but what I really love is sculpting and bodywork—following the light with your eye.”

She is also open to teaching as a career and points to her ABCT instructors, Scott Logan and Gerry Rainford, as her inspiration. “Scott and Gerry are awesome teachers,” she said.

“I really like that everyone is connected across the automotive programs in the DCTC Transportation department. You can ask questions and get answers from students and faculty in other programs.” — Elise Groenewold

Gerry Rainford considers Elise a role model for any ABCT student. “Elise is proof that with hard work and attention to detail you can achieve any goal you put your mind to,” he said. “Scott and I are proud of Elise and her accomplishments.”

Elise’s favorite automobiles are the muscle cars from the 1960s and 70s, especially the Camaro and Trans Am. When she’s not studying (she’s busy completing her A.A. degree at North Hennepin), Elise enjoys pheasant hunting with her boyfriend and working on auto body projects at home. She has an older brother, Nathan, 26, a stepsister, Jessica, 28, and a stepbrother, Peter, 24. Her English setter, Alize, is four years old.

RHS teachers get a taste of two-year college life If you were on campus Aug. 30, you may have noticed a few large groups…