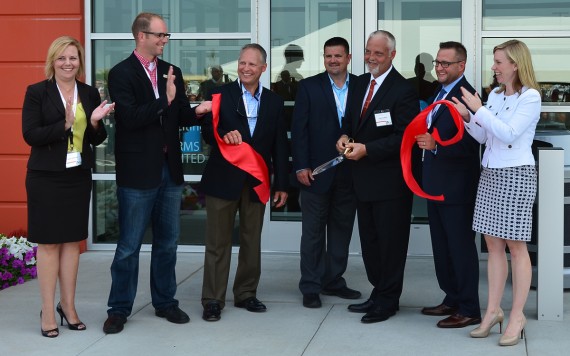 Staff from the Center for Professional and Workforce Development at Inver Hills Community College and Dakota County Technical College attended the ribbon-cutting ceremony for the new Shutterfly, Inc., $60 million facility in Shakopee, Minn, Friday, Aug. 1, 2014 (Shutterfly Day by gubernatorial proclamation). In March of this year, Inver Hills received a $307,955 grant from the Minnesota Job Skills Partnership (MJSP) to fund training for more than 1,000 employees at the facility, which is located off Highway 169 and Canterbury Boulevard. The grant period runs from March 4, 2014, to Feb. 28, 2016. Training emphasis is on computers and technology, and organizational improvements.

Pat McQuillan, CPWD dean, reported that the MJSP grant was developed through a collaboration with DEED, Shutterfly and CPWD. “This grant took eight months to establish,” McQuillan said. “We worked with Shutterfly’s California office via webinars to design a comprehensive workforce training program. We’ve already trained close to one hundred Shutterfly employees with plans to train another two hundred over the next three months.”

From the MJSP Funded Projects and Grant Management Web page:

Founded in 1999, Shutterfly has become a well-known supplier of customized photo albums and other personalized stationary products ordered online. Their line of goods, sold direct to the consumer through ecommerce, includes a wide range of products, such as digital photographic prints, greeting cards, calendars, and wedding products. Shutterfly employs more than 1,500 employees, spread across 11 locations worldwide. Shutterfly is preparing to launch their new $60 million facility in Shakopee which is expected to create more than 1,084 jobs during the next two years, including 227 new permanent jobs, and at least 857 seasonal workers annually (who will be hired during the fourth quarter/holiday season).
(read more…)

For more information about the Center for Professional and Workforce Development at Inver Hills and DCTC contact: