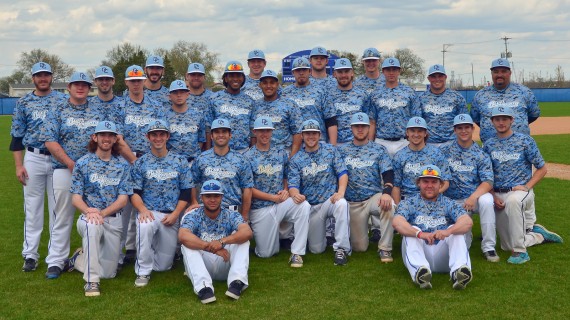 The Dakota County Technical College baseball team (21–14) defeated the Williston State College Tetons (21–19) 10–5 Sunday, May 11, 2014, to win the NJCAA Region 13 Tournament at Afeldt Stadium on the Williston campus in Williston, N.D. To reach the final and their second consecutive Region 13 championship, the Blue Knights rolled over the Bismarck State College Mystics 12–4 on Friday, May 9, and then slammed the Tetons by the same score on Saturday, May 10.

In the first game against the Mystics, Chase Lonetti, sophomore, CF, of Woodbury, Minn., went three for five at the plate, singling in the fifth, seventh and eighth innings, and scored two runs. Sophomore Tyler Smith (3–0) of Brooklyn Park, Minn., got the win, throwing seven strikeouts while allowing one earned run on four hits and four walks over seven and two thirds innings.

Freshman Victor Marin, C, of Miami, Fla., went four for five and scored three runs, doubling in the sixth inning and singling in the second, fourth and ninth innings in the second game against the Tetons. Sophomore Joel Klinkhammer (4–1) of Lakeville, Minn., got the win, striking out 13 while allowing four runs on nine hits over six innings.

The Blue Knights put together 14 hits in the final, going ahead 10–1 by the seventh inning. Sophomore Chris Gaynor, 2B, of Longwood, Fla., got three hits at five at bats with 1 RBI. Chase Lonetti went two for three, including a home run, scoring twice and getting three RBIs. Sophomore Josh Pierce (5–2) of Minneapolis, Minn., got the win, striking out five while allowing one run on four hits. Sophomore Roy Hotvedt of Perth, Australia, got the save.

Coach Trent Seaman reported that DCTC starting pitchers, Tyler Smith, Joel Klinkhammer and Josh Pierce, pitched full games. “Because our starting pitching was so good, we were in great position even if we lost a game with so many fresh bodies still left to come in and pitch,” Seaman said. “I can’t say enough about the job they did. They really competed; they pounded the strike zone, and kept their pitch counts down, things we have been preaching all year.”

Seaman added that the Knights received offensive performances from everyone in the lineup, scoring 34 runs in three games. “I don’t want to point any individual out, because everyone had a great weekend at the plate,” he said. “We don’t ever talk about scoring runs, but really preach putting together quality at bats. If we put quality at bats together, the runs will come, and, boy, did they come in bunches this weekend. There was no question our players stayed focused and committed.”

DCTC advanced to the NJCAA North Plains District Championship May 17–18, 2014, hosted by Region 11 champion, Southeastern Community College in West Burlington, Iowa. Joining the Blue Knights and Black Hawks in the Districts were the Southeast Community College Storm from Beatrice, Neb.

When he came to the United States in 2005, former DCTC student and soccer player Alejandro De la Mora wanted nothing more than to…