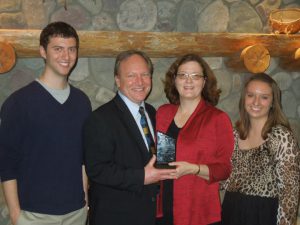 “I got a phone call from MSCSA notifying me that I received the award—and I was speechless,” Brett said. “I had two questions: Do I need to dry-clean my suit? And whom do I need to thank for this award?”

Brett was honored and moved that he was chosen for the prestigious award by an MSCSA selection committee representing more than 100,000 students from across Minnesota. The committee was impressed by the heartfelt testimonials submitted by staff and students in the DCTC campus community. The MSCSA has a membership composed of students from two-year technical, community and comprehensive colleges on 47 campuses. The MSCSA Instructor of the Year Award spotlights Brett’s engaging teaching style and singular commitment to student success. 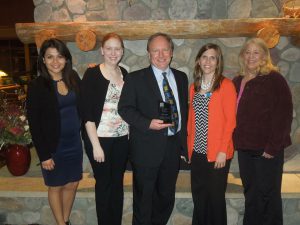 A native of the Twin Cities and a resident of Eagan, Minn., Brett is a 1981 graduate of Frank B. Kellogg High School, formerly in Roseville, Minn. He went on to earn a Master of Arts in English, a Master of Business Communication certificate and a Bachelor of Arts in Journalism from the University of St. Thomas.

During a 14-year career in advertising, he worked at Hubbard Broadcasting and then Advo. At the time, the latter ranked as the world’s largest direct mail company. Brett climbed the ad biz ladder from an entry-level account executive to a top-tier corporate account executive. “My mentor at Advo told me to identify my dream account and go after it,” he remembered. “I picked Northwest Airlines and learned everything I could about the airline industry. I eventually landed the account—and it was huge.”

When Northwest merged with Delta, Brett was ready for a change. Seeing how he could combine his two passions, business and writing, he decided to exchange life as a madman for life as a teacher.

“I recognized more parallels between the two than differences,” he said. “Throughout my advertising career, I had been working with a resistant audience. Why would that be different from teaching college English?”

“You see, looking at challenges and setbacks from different angles is one of the core skill sets that I try to impart to my students. Whether it’s dealing with life’s occasional monkey wrenches or reading complex literature—it helps to view things through a different perspective. — from “Looking Through a New Lens: When Facing Challenges, Get a Fresh Perspective,” Brett’s MSCSA Outstanding Instructor of the Year acceptance speech

Brett got his start by teaching as an adjunct English professor at St. Thomas for two years. In 2008, he joined the General Education department at DCTC, teaching English courses as an adjunct. He quickly became full-time faculty.

Relating the importance of English studies, including learning how to write proficiently, is something Brett takes seriously. “We live in the Communication Age,” he said. “Those who communicate well master their lives. It may sound harsh, but people will judge you by the words you use.”

Brett makes his English courses as practical as possible, blending humor and fun with academic rigor to keep students alert and engaged. He noted that students also love stories. “In 2013, I facilitated a ten-week grammar and writing workshop for the Apple Valley Police Department to improve report writing and other correspondence,” he said. “At first, I met with some resistance, which can also be the case in my college classrooms, but as we worked on basic grammar, economical word choice, passive and active voice, and connecting reading and writing vocabularies, the police officers began seeing the merit in writing clearer, more concise reports. My students were impressed by the fact that all the officers had four-year degrees.”

A national authority on the Irish writer, poet and playwright, Oscar Wilde, Brett gave a presentation at Yale University in 2010 called “Another Wilde Irony: Press Relations and the Commodification of Oscar Wilde.” To learn more, read “Wilde Man” in DCTC News.

Serving as faculty advisor to the DCTC Campus Lions Club is one of Brett’s passions—and the Campus Lions Club Annual Chili Cook-Off is one of his favorite events. This year’s Cook-Off took place Thursday, April 17, in the Student Life Center. Students, staff and faculty entered crock pots of chili to win prizes in three categories: Tastiest, Best Presentation and Hottest. More than 25 types of chili were featured for attendees to sample. All proceeds were donated 360 Communities.

Shira Rabinowicz, the Rosemount Family Resource Center coordinator, represented 360 Communities at the Cook-Off. Shira reported that the money raised at the event will go to the RFRC Food Shelf. “We will use the proceeds during the summer when donations go down and demand goes up,” she said. “This is the first Chili Cook-Off where we have partnered with the DCTC Campus Lions Club, but the club has helped coordinate our food drive for the last two years, collecting donations that serve one thousand individuals a month. We cannot do our work alone. We have forty-five amazing volunteers who take ownership and bring synergy to our organization. It really does take a village.”

All three winners took home a $25 gift card and a customized 2014 Chili Cook-Off apron commemorating the event. Interim Vice President of Academic and Student Affairs Mike Opp won an Adrian Peterson jersey for his daughter. The event raised more than $1,000 for 360 Communities.

When Brett isn’t teaching, he enjoys reading political thrillers. Memorial Day, by Vince Flynn, the late Minnesota-born author, is one of his all-time favorites. He loves to play poker and traveling also ranks high on his list. In January 2014, he vacationed with his whole family in the Dominican Republic.

“We had a phenomenal time,” Brett said. “We stayed in Punta Cana and the temperature was eighty-four every day. My father decided at the last minute to join us—and that was wonderful. The kids really got to know their grandfather.”

For more information about English courses and the Campus Lions Club at DCTC, contact:

Two regional awards mark growth and diversity Dakota County Technical College prides itself on diversity and growth.  How fitting it was for the DCTC…