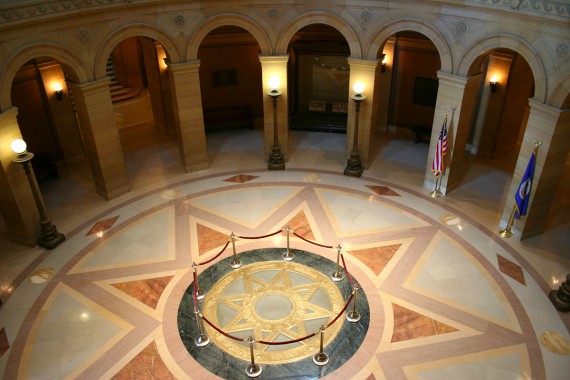 The Minnesota Foundation for Student Organizations (MFSO) held Career and Technical Student Organizations (CTSO) Day at the Capitol Wednesday, March 19, 2014. State officers and alumni from CTSO joined MFSO board members to learn more about the state legislature and civic responsibility while gaining the opportunity meet with state representatives and senators. 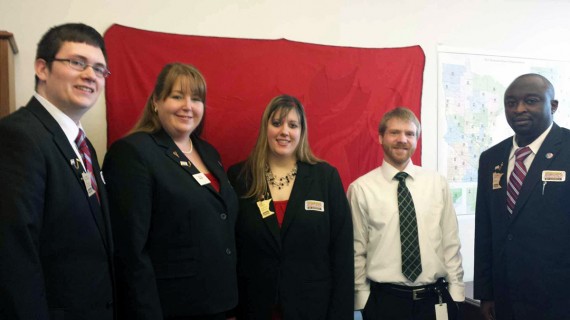 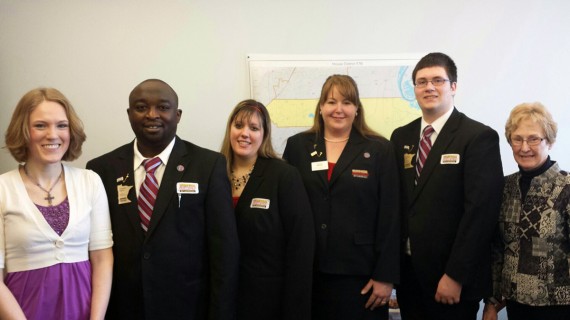 Marie Saunders, a DCTC accounting instructor and BPA chapter faculty advisor, reported that Adamson and Ngwa take full advantage of the experiential activities offered through their involvement in BPA, a CTSO recognized and served by the MFSO.

“One of the main purposes of Business Professionals of America is to enrich student learning with professional development opportunities,” Saunders said. “The Day at the Capitol gave our students firsthand knowledge of the legislative process. Tracy and Clement do an excellent job of representing not only BPA, but DCTC as well.”

Bev O’Connor, executive director of the Minnesota BPA College Division, thanked BPA student officers for attending the MFSO-sponsored Day at the Capitol as well as for preparing messages for the meetings with Rep. Wills and Rep. Lien. O’Connor noted that student professionalism at both meetings was outstanding.

“The students gained a lot of insight as to legislative initiatives, and the duties and responsibilities of the representatives,” O’Connor said. “They were also able to see the number of people employed by the representatives— and the role they play in assisting them.”

Earlier that morning, the student officers attended meetings to learn the etiquette expected when meeting legislators.They got the chance to tell their stories and discover more about the state’s basic political and civic structure. The students also participated in a meet and greet in the Minnesota State Capitol Rotunda with the president and members of the Minnesota Association of Career and Technical Administrators (MACTA).

“Our purpose was to let our representatives know how much we appreciate the funding they give to all of our Career and Technical Student Organizations,” O’Connor said, “and to testify how our organization, Business Professionals of America, has made an impact on the students it serves. I am so very proud of the work all of our officers, state and national, are doing for the Business Professionals of America College Division.”

Student Organizations represented at the Day at the Capitol:

Emily Saed, MFSO executive director, on the Day at the Capitol

“The MFSO held its second annual Day at the Capitol in conjunction with MACTA’s annual Legislative Conference. In lieu of weather, both conferences had a few “no-shows,” but there were twenty-one students in attendance and every CTSO was represented! The students were put in groups of three to four; most groups had two appointments with representatives or senators. There were a total of twelve appointments throughout the day. The House was in session that day at noon, so students were able to observe from the gallery! Many of the groups also had time to tour the Capitol building. At the end of the day, we talked about how we could improve the event for the students; all agreed it was a great experience. Most would have liked more time to visit with other CTSO officers. Some also suggested we have additional training.”

To learn more about Business Professionals of America at DCTC, contact: