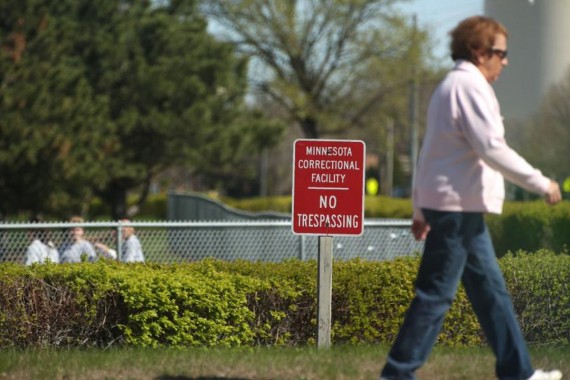 Prison fence: Instead of a fenced property, the women’s prison at Shakopee has a hedge and a low fence. Dayton last week offered support for a $5 million fence as part of his bonding request. (photo by: Renee Jones Schneider, Star Tribune)

In a year that could bring a large bonding bill, local interests are making their case to bring home a piece of the pie

An ambitious plan to remake the Minnesota Zoo, a fence for an open-campus prison and a technical college work space that “hasn’t been touched since 1970” are among the big-ticket priorities south of the river as the 2012 legislative session approaches.

Gov. Mark Dayton last week offered support for a $5 million fence for the women’s prison at Shakopee but took a giant whack out of a $53 million request to tackle the zoo’s new master plan, including $16 million for a new Asian Highlands area. Zoo officials were betraying no disappointment.

“We are pleased that Gov. Dayton’s proposed bonding bill includes $12 million to address critical infrastructure and facility improvements that will help transform the Minnesota Zoo’s main entry and building, including the completion of renovations to Discovery Bay,” the aquatics area that used to house dolphins, said spokeswoman Kelly Lessard.

Dakota County Technical College welcomed the governor’s support for a $7.6 million allotment for transportation and emerging technologies, saying it’s a part of the facility that has long languished.

“These are all programs preparing students for high-paying, high-skill jobs, yet the space we’re talking about has not been touched since 1970 — to the point that really, ventilation became a problem and fumes were not escaping the building properly.”

Scott County isn’t asking for anything major for itself this year, said former legislator Claire Robling, now the county’s communications and legislative coordinator, but is backing proposals that could benefit it along with others.

A case in point, she said:

The county’s civic leaders are “supporting the request from the Metropolitan Council for $10.5 million in bonding for regional parks. Scott County has always been a beneficiary of these funds,” indeed a major one in recent months, “and it is disappointing the governor only included $5 million in his proposal. We will join other metro park entities to lobby for additional funds.”

The governor’s weigh-in, in fact, is hardly the last word on legislation, and it neither guarantees passage nor condemns anything to doom.

Dakota County seeks to tuck six building projects into the state’s bonding program for 2014 — none of which made the governor’s list.

• $6 million to start the design and construction of a new stop for the bus rapid transit line, the Cedar Avenue Red Line, in Eagan;

• $1.4 million to start the design of transit improvements on S. Robert Street in St. Paul and West St. Paul, and

•  $787,500 to build a trailhead for the Big Rivers Regional Trail in Mendota Heights.

Facing a funding shortfall of nearly $600 million to meet county road needs between now and 2030, the county also is urging legislators to increase state funding for roads, provide more money for transit and consider new revenue sources based on transportation user fees.

Scott, meanwhile, is keenly interested in Carver County’s desire for help to build a key link from the new Hwy. 101 bridge that will be going up in Shakopee, across the Minnesota River.

Carver wants help connecting old Hwy. 212, now 61, with the new bridge, which will be built beginning this spring, Robling said.

“Carver County is going to go ahead with the project but they will have to pay for it upfront and may need to wait up to 10 years to get reimbursed from the state,” she said. “This creates an additional financial burden on the county, but it makes sense to do the project now, when the bridge is being constructed.

“The governor did put $30 million in his bill for local bridges and $10 million for local roads, and Scott County may benefit from these funds, but of course the demand for these dollars is very high.”

Both counties also have a variety of other items on their wish lists.

Dakota County has a list of 15 legislative initiatives this year, and is pursuing policy changes that give it more freedom to handle its own administration, finances and tax levy.

High on the list is the request that legislators “allow local governments to make their own tax levy decisions.’’

Tax levy limits imposed by the state leave little time for cities and counties to adjust their budgets and services, the county says in a position paper.

Although legislators did impose levy limits for 2013, the restriction was lifted for Dakota through special legislative consideration. Otherwise the limits would have foiled the county’s plan to pay down debt and use that money for operating costs, resulting in property taxes slightly below the previous year.

The county was singled out by Revenue Commissioner Myron Frans for holding property taxes down. But had the property tax levy limit imposed by legislators applied to the county, the flexibility and creativity Frans recognized would not have been possible, said Matt Smith, deputy administrator for the county.

The county’s position is that “local elected leaders of cities and counties are accountable to local voters and taxpayers.’’

Dakota is also asking legislators to give the county more control over what property is tied up by cities in tax increment financing districts. Specifically, the county would like legislation requiring Dakota County’s consent for all city tax increment districts.

In 2013 the county was required to distribute more than $3.6 million in county property taxes to tax increment districts. “This was revenue from the county’s tax levy which was paid by residents who did not benefit directly from the district. Thus Dakota County’s consent should be required before a TIF district is established in the county.’’

Burnsville Mayor Elizabeth Kautz pleaded with commissioners to take the tax increment issue off the county priority list. She said the county and city have always cooperated in the past and she objected to what amounts to a county veto of city redevelopment efforts. The county declined to remove it.

Improve your core strength, balance & stabilization while toning your muscles Class starts Jan. 19 and runs thru March 11 Every Tuesday and Thursday…