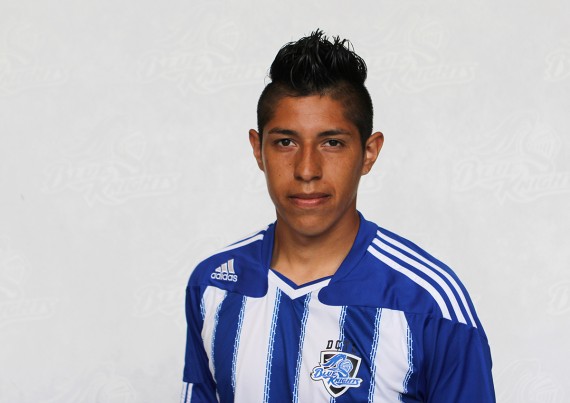 Jose Andiano Castillo, a freshman midfielder on the Blue Knights men’s soccer team at Dakota County Technical College, was named to the 2013 NSCAA/Continental Tire Junior College Division I Men’s All-America Second Team. A 2012 graduate of Bloomington Kennedy High School, Andiano Castillo led his team and the nation with 16 assists this past season.

Head Coach Cam Stoltz reported that Andiano Castillo is the second All-American in the history of the men’s soccer program at DCTC and the seventh produced by the college’s six athletics programs.

“Getting named to the All-America Second Team by the National Soccer Coaches Association of America is a very prestigious honor,” Stoltz said. “Jose is one of only four freshman in the top twenty-two players—and there are about 4,000 players at the NJCAA Division I level.”

Stoltz added that Andiano Castillo played all 20 games during the 2013 season for a team that went 16–3–1 and at one point was ranked ninth on the NJCAA DI Top 25 poll and the National Soccer Coaches DI Top 20 poll. Andiano Castillo started 17 games and was on the field 99 percent of the minutes played all season. The Knights lost 1–3 to Iowa Western Community College in NJCAA Region XI Championship.

“Jose is hands-down the hardest working player on our team,” Stoltz said. “He is a nonstop runner end to end. His tenacity and quickness make him a nuisance to opposing teams and dangerous on the attack. He is a superb transition player. Because he is so quick on the transition, Jose can take more risks as an attacker. Leading the nation in assists is an amazing accomplishment.”

Jose Andiano Castillo will back next season for the Blue Knights.