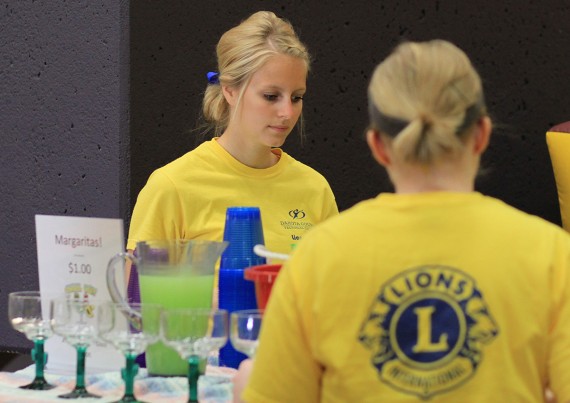 The Student Senate at Dakota County Technical College hosted Ocho de Mayo on the college’s main campus in Rosemount, Minn., Wednesday, May 8, as a way for students to begin celebrating their upcoming graduations. The event included a four-way bungee tug, a track to race remote-controlled cars, a photo booth and free nachos.

The DCTC Campus Lions Club participated in Ocho de Mayo through the club’s support for the Tour de Cure, a series of cycling fundraisers across 44 states benefiting the American Diabetes Association. Cary Truman and Melanie Benitez, two DCTC students and Lions Club officers, are riding in the Twin Cities Tour de Cure Saturday, June 1, 2013. The Lions sold nonalcoholic margaritas during Ocho de Mayo for $1 each to support Cary and Melanie’s efforts. Donations of $10 or more were rewarded with a souvenir margarita glass.

Brett Kolles, an English instructor at the college, serves as a Campus Lions Club advisor. He is excited by the enthusiasm Lions Club members bring to community involvement. “I would love to clone this team,” Brett said. “During this past semester, we have grown and laughed and been amazingly productive while having a great time. Our motto is ‘Rock and Roar’ and our theme is ‘fun with a purpose.’ I like to say that DCTC Lions are big on projects and small on meetings.” 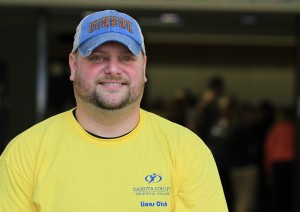 A native of Red Wing, Minn., Cary Truman, 37, is majoring in Heavy Construction Equipment Technology with plans to graduate in May 2015. Cary learned he had type 2 diabetes in May of last year. His father-in-law also has type 2 diabetes, which is the most common form of the disorder. People with type 2 diabetes have bodies that do not produce enough insulin or cells that ignore insulin, a hormone needed by the body to process glucose for energy. Cary’s grandmother has type 1 diabetes, which is typically diagnosed in children and young adults. The bodies of people with type 1 diabetes do not produce insulin at all. According to the International Diabetes Federation, diabetes affects at least 285 million people around the world. That number is expected to reach 438 million by the year 2030.

Cary noted that he manages his type 2 diabetes through exercise and modifying his diet. He checks his glucose levels twice a day. “My wife, Lisa, has supported me all the way,” he said. “She exercises with me and changed her diet to match mine.”

Cary is looking forward to his 18-mile Scenic Sampler ride for the Tour de Cure, a ride that will begin at Minnehaha Falls Park at 10 a.m. June 1. “I’m happy the Lions are involved in the search to find a cure for diabetes,” he said. “Since joining the Lions, I have met other club members with type 2 diabetes. We are excited to be part of this national effort.” 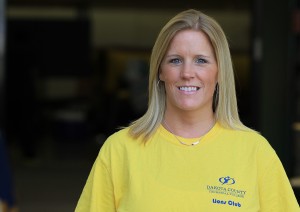 A 1994 graduate of Lakeville High School, Melanie Benitez, 37, is majoring in Practical Nursing. Melanie has always wanted to be a nurse. At the age of 18, she enrolled in the very same program at DCTC, but the demands of motherhood changed her plans. She raised three children while pursuing a career in finance. Ramiro, 19, is in the Minnesota National Guard and enrolling at St. Cloud State in the fall. Isiaha, 17, is graduating from Lakeville South in May 2014. Gabriela, 14, is in the 7th grade.

After her finance job was shipped overseas, Melanie, a single parent, became eligible for dislocated worker and TAA funding to go back to college. She took full advantage the opportunity and will be graduating with her A.A.S. degree in spring 2014. She is a part-time certified nursing assistant at Cerenity Senior Care. Already qualified to pass medications, she looks forward to serving as an LPN with the ultimate goal to become an RN.

Melanie is the marketing director for the Campus Lions Club. “I joined for the activities,” she said. “Through the Lions, I’ve been involved in Habitat for Humanity and One Rosemount. Both events were great because I really enjoy helping people. I plan to do the 18-mile ride for the Tour de Cure.”

As of May 8, 151 teams with 1,703 riders are participating in the Twin Cities Tour de Cure. To register to ride or donate to a rider or team (including Cary and Melanie), click the image below:

Ben Jackson, vice president of the DCTC Student Senate, reported that Ocho de Mayo was created and planned by the Student Senate Activities Committee as a continuation of the popular Grad Blast. Committee members besides Ben include:

Other Student Senate members who helped with Ocho de Mayo are Sergio Garcia, Nanci Al-Kordi, Jocelyn Vergara and Miriam Vergara. Ben pointed out that Jocelyn and Miriam volunteered to show up at 7 a.m. the day of the event.

A Landscape Horticulture major with only one class to go before he graduates, Ben encouraged other DCTC students to join the Student Senate. “You get the chance to meet people from other academic programs—something you might not do otherwise,” he said. “You also get to travel around the state once a month to attend Minnesota State College Student Association events and meet students from many different colleges. As a student senator, you work to improve the college experience for all students.”

To learn more about Student Life or Student Senate at DCTC, contact: