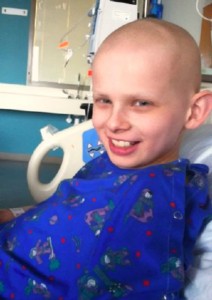 The Knights took on the University of Wisconsin-Superior varsity, coming from behind to defeat the Yellowjackets 3–2. In the following game, UW Superior’s JV scrimmaged ACME, a men’s team in Monday Division D2 of the Minnesota Recreational Soccer League, or MRSL. Evan’s father, Mike Thornton, is a member of ACME and a longtime community soccer player.

“This event was a great way for our young college athletes to recognize the struggles faced by Evan and his family,” said DCTC Head Soccer Coach Cam Stoltz. “The scrimmages fostered kindness through the sport of soccer and gave our players the opportunity to support a local community member in a time of great need.”

Greg James, a friend of the Thornton family, was at the scrimmages collecting donations for Evan. “This was a fun event and I am very pleased with the funds raised,” James said. “The $750 will help Evan and his family pay for Evan’s hospital bills.”

The latest news from Evan’s mother, Trina Thornton, reports that Evan will be receiving whole-lung irradiation at Abbott Northwestern Hospital in Minneapolis. Whole-lung irradiation is often used on Ewing’s sarcoma patients with pulmonary metastases that do not respond to chemotherapy. 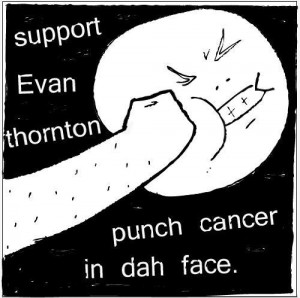 To learn more about how you can support Evan in his battle against cancer, please visit and like his Facebook page, Evan Thornton – Punch Cancer In Dah Face, and follow Evan’s story on CaringBridge.org. A benefit will be held for Evan Sunday, May 5, 2013, at The Bulldog Uptown from 2 p.m. till  6 p.m. Donations can be mailed to: