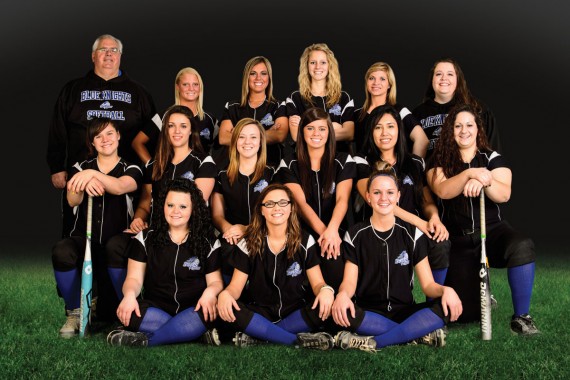 The DCTC Blue Knights women’s fastpitch softball team kicked off the 2013 season with two comeback wins against the Tritons of Iowa Central Community College at the Irish Sports Dome in Rosemount, Minn., on March 8.

“I can’t tell you how proud I was to watch our softball team win their opening games against Iowa Central, the number four ranked team in the Iowa Community College Athletic Conference Division II,” said Cam Stoltz, DCTC’s athletic director.

In the first game, the Tritons had a four-run lead going into the bottom of the fifth inning. DCTC pulled to within two runs and then DCTC first baseman, Amanda Orrell, hit a grand slam to put the Knights up 7–5. Stoltz said Orrell’s homer was the highlight of the game. Iowa Central crept back, but DCTC scored twice in the sixth inning to seal the 9–6 win.

During the second game of the doubleheader, Iowa Central scored five runs in the first inning to take a commanding lead. The Blue Knights rallied again, scoring seven runs in the seventh inning to go up 12–9. The final score of the game was 12–10.

“Both games were hard fought wins against an excellent opponent,” said Head Fastpitch Softball Coach Tom Cross. “We came from behind twice and that shows resilience. We will continue to improve throughout the season.”

The DCTC Blue Knights women’s fastpitch softball team heads to Clement, Fla., on March 16 for a five-day tournament. Their next home games are on March 29 at the Irish Sports Dome against the Williston State College Tetons at 4 p.m. and the Dawson Community College Buccaneers at 6 p.m.