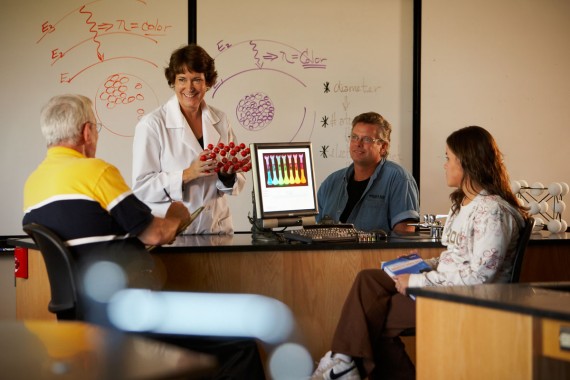 Nanotechnology is the study of these tiny objects on the nanometer scale (nano refers to one billionth). Nanotechnology as serious science emerged in the early 1980s and has since caught on in multiple business and industrial environments.

KARE 11 interviewed Deb Newberry, the director of both Dakota County Technical College’s Nanoscience Technology program and the Midwest Regional Center for Nanotechnology Education, better known as Nano-Link, for the station’s Cool in School segment on Feb. 15, 2013.  Watch the video and read the full article:

“Where is it?” said Deb Newberry, who was trying to focus a dip pen lithography machine on a silicon chip.

The machine is a piece of sophisticated technology used in Newberry’s nano science technologist program at Dakota County Technology College in Rosemount.

Newberry is looking for something she created on the chip using dip pen lithography. Something so small, the human eye could never find it, nor could most microscopes.

It’s measured in nanometers, “A very, very small level,” explained Newberry. “Atoms and molecules is what we deal with.”

Newberry not only directs the program, she built it with the idea of giving students a two year option to pursue a career with a brights future in Minnesota.

“This is the most advanced science I’ve ever seen,” said Jon Duff, a recent Rosemount High School graduate. He’s intent on finding a job when he completes the program.

So is Ryan Coleman, who found his career in construction foundering in the recession.

“Primarily I was looking for something that I knew would be marketable,” said Coleman. He travels 57 miles from his home to attend this program, which is unique in its breadth.

“There’s no other program in the U.S. that has the multi-displinary aspect that we do,” said Newberry.

That’s the appeal of nanotechnology. “Everything in this world, the properties of it, whether it’s your hair or the chair I’m sitting on, the properties are dependent on how those atoms and molecules are arranged,” said Newberry.

Understanding those properties leads to new discoveries about how things work, which can lead to breakthroughs in manufacturing, medicine and technology.

Newberry is looking to extend the reach of nanoscience to high schools. She’s been working with a company called Nanolink to develop a program and tools that can be used at community colleges or high schools called NanoProfessor.

Her aim is to hook students who many not have considered a career in science and technology. “Once that enthusiasm starts bubbling up in them they go, ‘shoot, if I can do this, I’m going to go to the U of M and do chemical engineering.”

For more information about Nanoscience Technology at DCTC, please contact: