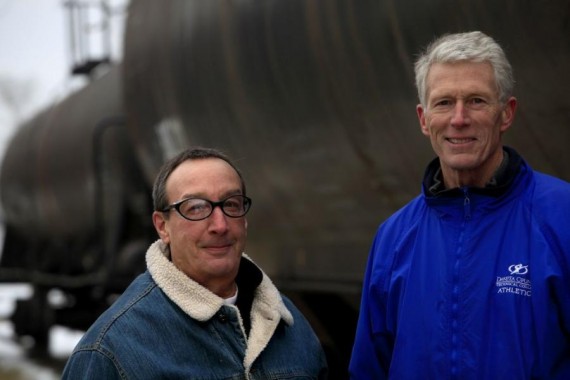 Rail systems in the United States date back to the 1800s when trains operated on only 39.8 miles of track. Railroads soon became critical to the transportation of coal and granite. Today, the U.S. rail network consists of more than 550 separate railroads that cover approximately 142,000 miles from state to state. They move 42 percent of our nation’s freight. By 2030, rail travel from New York City to Washington, D.C., will take only 94 minutes.

For many, railroads are a source of fun and fascination; railway buffs can be found all over the world. For many others, railroads are a gateway to a great paying job. In the Star Tribune article, Dakota County Technical College is filling the railroad ranks, Railroad Conductor Instructor Dan Spano puts the modern rail industry in perspective. Read the full article:

Dakota County Technical College is helping to meet the demand for railroad conductors.

As Don Spano walks the lines of box cars and train tracks, you can almost hear Hank Williams or Johnny Cash in the background, conjuring up romantic images of riding the rails.

But just as quickly as a 200-mile-per-hour Japanese bullet train, Spano, an instructor at Dakota County Technical College, snaps you back to reality:

“Trains have a romance for everyone who doesn’t work on them,” he said on a cold December day at the college’s rail yard facility.

But in reality, “It is a noisy, dirty and smelly job. This equipment, some of it 50 years old, doesn’t ever get washed.”

Those drawbacks have not stopped hundreds of prospective train workers in the past seven years from making their way from all over the country to enroll in the school’s Railroad Conductor Technology program, one of only three such college programs in the United States, said Larry Raddatz, the school’s director of manufacturing and railroad.

Raddatz said that most of the students enroll not because of the romance of trains and railroads, but as a career change or to take advantage of rock-solid job security and prospects in the $50 billion-a-year railroad industry.

An ongoing wave of retirements nationwide among baby boomers is leaving a gap of several thousand jobs each year — jobs that pay $25 an hour to start and more than $70,000 a year after two years, he said.

Becoming a locomotive engineer can lead to jobs that pay $100,000 or more, he said.

“There’s a lot of baby boomers, and they are going to be replacing folks in all jobs,” Raddatz said.

Railroad workers don’t have a mandatory retirement age, and the economic viability of railroads is only growing, Spano and Raddatz said.

They estimated that this year there was a shortage of 15,000 workers in the industry.

That job security is what has attracted students not only from Minnesota but also from Alabama to Wisconsin and from Texas to Florida since the program began in 2005.

“It has been growing the last couple of years because of the economy,” said Chris Yang, an enrollment adviser and financial aid specialist at the school. “We don’t do any placement, but usually they find jobs after they graduate.”

Yang said the tuition for the course is about $4,800, with some financial aid available.

Raddatz said that in Minnesota, the employment growth in railroads is expected to be about 16 percent a year through 2016.

“I wanted to have a career,” said Erick Robinson, originally from Memphis and one of about 15 students who is completing the course and will be ready for full-time employment in about two months.

The jobs will involve overseeing train routes, moving cars and switching tracks. There are also opportunities to work on passenger trains.

But most of the students who go through the Dakota County program are looking to work the rails from the outside — not inside an Amtrak train.

“That’s the best part about the class — the hands-on,” said Tim O’Brien of Burnsville.

Students learn outdoors on a quarter mile of track using several rail cars, two switches and a trackmobile — a less powerful locomotive used to move the cars around. The school invested about $250,000 to get the program started.

The conductor program began with the help of some of the biggest railroads in the country, who were acutely aware that they were soon going to be losing thousands of workers and decades of experience to retirement.

As a result, the Union Pacific, Canadian Pacific and other companies make annual donations to the program.

“That’s part of the reason we were created — to meet that bubble of exiting workers,” Spano said. “They’ve been scared to death of it for a long time.”