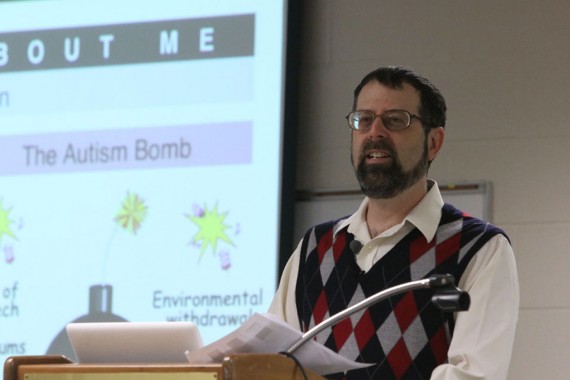 Autism affects one in 88 children, making it the fastest-growing serious developmental disability in the U.S. (Autism Speaks).

Dakota County Technical College hosted Advancing with Autism: A Blueprint to Success Beyond High School, on Dec. 14, 2012, made possible through a grant from Autism Speaks. Experts in the field shared resources with students, families and educators about the transition through life for those on the autism spectrum.

Featured speaker, Dr. Stephen Shore, told attendees about his personal experience with Asperger syndrome. Being diagnosed with atypical development and strong autistic tendencies didn’t stop Shore, who went on to become a professor at Adelphi University. Shore focused his research on meeting the needs of people with autism. He has published three books, recently released a DVD, and presented in 28 countries to raise awareness about autism.

During the symposium, a panel of four DCTC students explained their personal struggles and successes about attending college as students with autism. Devin Flagg’s presentation called the “Top 10 Tips for Surviving College” sparked the interest of Christopher Magan, a reporter with the Pioneer Press.

When Deborah Gee-Tritschler’s son, Devin Flagg, was diagnosed with autism at age 3, she wasn’t given much hope for his future.

“I was told he needed to be put in a mental hospital and I should find myself a career,” said Gee-Tritschler, an Apple Valley resident. “I wasn’t about to give up on a 3-year-old.”

For more than 10 years, DCTC has offered unique programs to support low income, first generation, and students with disabilities. This includes tutoring, providing accommodations for disabilities, and teaching study skills. “Not only does DCTC have programs for students’ specific needs, we have several partners to reach out to,” said Dora Schumacher, TRiO/Student Support Services Director.

Advancing with Autism partners, such as AuSM, Fraser, Vocational Rehabilitation and  Opportunity Partners, also attended the symposium to share their expertise during a series of breakout sessions and community resource panel discussion. The organizations help individuals realize their goal of successful educational endeavors and eventual employment.

“Whatever the student needs, we will find the resources,” said Schumacher.

Schumacher remarked on the large number of parents that were in attendance. “That’s who it was really for,” she said. “Parents don’t know who to go to. What I wanted was to have all of the resources in one room so they can get it in one shot and that happened. It was all gratifying.”

For more information about DCTC Student Support Services and TRiO, as well as ASD, contact:

Sponsored by Jim Kosmo • DCTC Bookstore • Creative Arts and Writing Club Are you a student at Dakota County Technical College? Are you a…