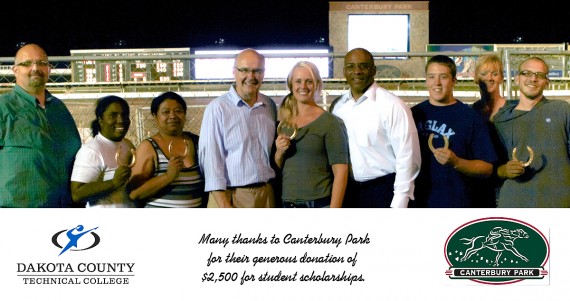 Canterbury Park, a premier horse racing track in Shakopee, Minn., partnered with the Dakota County Technical College Foundation in support of DCTC student scholarships. Canterbury Park hosted the popular event, Scholarship in a Haystack, at the track Thursday evening, Aug. 23, 2012, and provided $2,500 in student scholarship funds. Twenty participants dove into a huge mound of hay to search for five golden horseshoes, with each horseshoe redeemable for a $500 scholarship to the college.

Judd Greenagel, corporate partnership manager at Canterbury Park, has been working with the DCTC Foundation to make a DCTC night at the races a regular occurrence. Scholarship in a Haystack 2012 represents the third time Canterbury has hosted the free event. 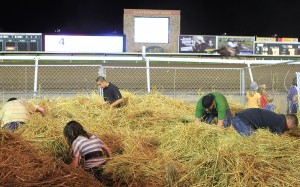 Scholarship in a Haystack 2011 @Canterbury Park

“Canterbury Park welcomes the chance to help DCTC students reach their academic goals,” Greenagel said. “Scholarship in a Haystack is great fun for both participants and spectators. We look forward to future opportunities for members of the college community to spend a night at the races at Canterbury.”

“Our students appreciate Canterbury Park’s generosity,” Leopold said. “Without the strong support of superb partners like Canterbury Park, students would have a much more difficult time achieving their college and career aspirations.”

Opened in 1984, Canterbury Park is one of the last great racetracks built in America. The 300,000-square-foot grandstand features three levels for racing, along with an 18,000-square-foot Card Casino. Canterbury Park’s sandy loam one-mile oval has three chutes: 3½ furlongs, 6½ furlongs and 1¼ miles. The turf course is a 7/8 mile inner oval that accommodates races at several distances. Canterbury holds live racing from May to September.

About the DCTC Foundation

Established in 1983 as a 501(c)(3) nonprofit organization, the DCTC Foundation is governed by a board of directors with up to 18 members. Since its inception, the Foundation has generated more than $3.2 million in financial assistance for students while building a general endowment fund and establishing private endowment funds.

For more information about donating to support student scholarships at DCTC, contact: