Filled Under: Guest Speakers, Resources, Thought of the Week

Here’s a sneek peak message from our May Guest Speaker:

Chalk certainly embodies the spirit of childhood. Perhaps it’s the memories associated with school, with chalkboards being the #1 visual aid for teachers everywhere. Then there’s sidewalk drawings, from crude family sketches to proportionally challenged hopscotch grids. And it’s a little messy, which is probably why grown-ups shy away from it.

Now if you ever went to college or live in a college town, as I do, chalk drawings are everywhere, in the form of either event marketing or political discourse or pledge week promotion. Apparently, those are the only “appropriate” ways to use chalk as an adult.

But a Kim & Jason Insider named Kimberly recently reminded me that chalk is yet another way to escape adulthood. As part of tackling Escape Plan Challenge #3, which is: “Do something that is typically seen as inappropriate for someone of your age,” Kimberly wondered why there aren’t more silly chalk drawings. “I feel like if there were more chalk drawings around,” she said, “it would make people happier.”

So she took a new pail of chalk and brightened the grounds around her apartment, including a smiling sun with “Have a Happy Day!” written under it at the nearby bus stop. What a cool way to combat Adultitis!

Adultitis-Fighting Tip: Create some chalk art this week. Odds are you or your kids have some lying around. Construct your own hopscotch game or draw some silly characters on the sidewalk. Write a fun message to 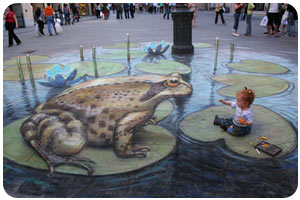 your mailman or pizza delivery dude. Get over the idea that adults can’t have fun with chalk. If you don’t believe me, consider this: the baby in the above photo? Real. The frog, pond, and lily pads? Chalk.

About the Author: Dawn Braa